Oct 27, 2016 10:46 AM PHT
Agence France-Presse
Facebook Twitter Copy URL
Copied
The stakes are high amid warnings that the EU's international standing will suffer further if 7 years of trade negotiations go to waste because of internal Belgian politics 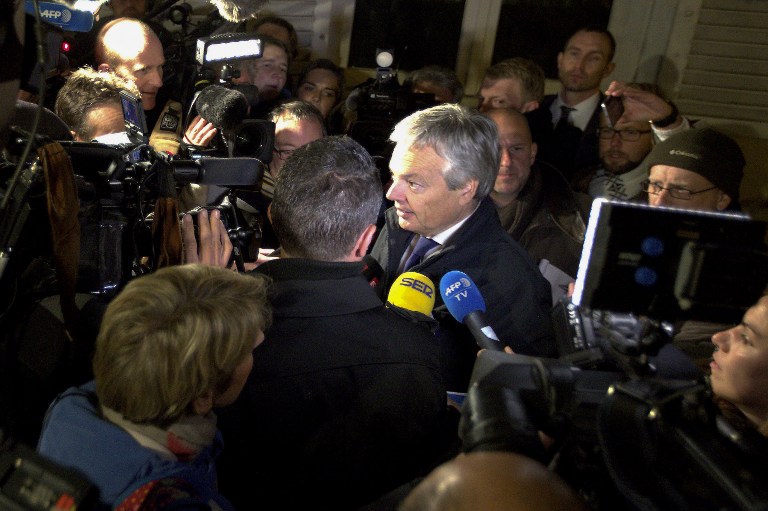 The stakes are high amid warnings that the EU’s international standing, already battered by Britain’s shock June Brexit vote, will suffer further if 7 years of trade negotiations go to waste because of internal Belgian politics.

Belgian Foreign Minister Didier Reynders said representatives from the federal government and the country’s linguistic communities would resume their talks at 0800 GMT on Thursday after adjourning before midnight Wednesday, October 26, without an agreement.

He had earlier reported the sides were near a consensus that would allow Belgium to overcome objections from its French-speaking communities and support a trade deal which must be endorsed by all 28 EU member states.

But he added technical issues still needed ironing out.

“We are awaiting a definitive response from” the various communities, Reynders said as the talks wrapped up for the day.

EU leaders had voiced optimism that Belgium’s federal government could win over the holdouts by late Wednesday.

But Rudy Demotte, president of the southern French-speaking Wallonia’s parliament, cautioned “we have technical discussions which are complicated.”

With no agreement in sight, Canadian Prime Minister Justin Trudeau postponed plans to travel to Brussels on Thursday to sign the Comprehensive Economic Trade Agreement (CETA) with EU leaders.

“The Canadian delegation will not be traveling to Europe tonight,” said Trudeau’s office.

“Canada remains ready to sign this important agreement when Europe is ready,” it said in the statement.

When and if the documents are agreed by the Belgian politicians, they must be sent for review to the ambassadors of all 28 EU member states, then likely return to the Wallon parliament and other Belgian government institutions.

Reynders said he expected Belgium to send the trade documents to the EU ambassadors around 0900 GMT.

Paul Magnette, the head of the Wallon government, said: “We regret it but it will be impossible to hold the summit tomorrow.”

Oliver Paasch, head of the German-speaking community, said “I am certain it will not be possible to sign the treaty tomorrow” even if it is still possible to reach a Belgian consensus that could be sent to the other EU member states.

In  the last few days, a range of intensive talks involving Belgian leaders as well as EU officials have been held in a bid to break the deadlock.

Donald Tusk, the European Council president who would host the summit, told the European Parliament in the French city of Strasbourg that he hoped the agreement would be finalized soon.

He also warned that the EU’s international reputation would suffer if the deal falls through with Canada, “the most European country outside Europe and a close friend and ally.”

Hinging on its success are other trade negotiations, including even more controversial ones with the United States.

The CETA pact would link the EU’s single market of 500 million people with the 10th largest global economy in what would be the most ambitious tie-up of its kind so far.

Leaders of Wallonia, a 3.5 million-strong region south of Brussels, want guarantees that CETA will not harm local farming and other interests.

Critics especially oppose terms of the deal intended to protect international investors which they say could allow them to force governments to change laws against the wishes of the people. – Rappler.com