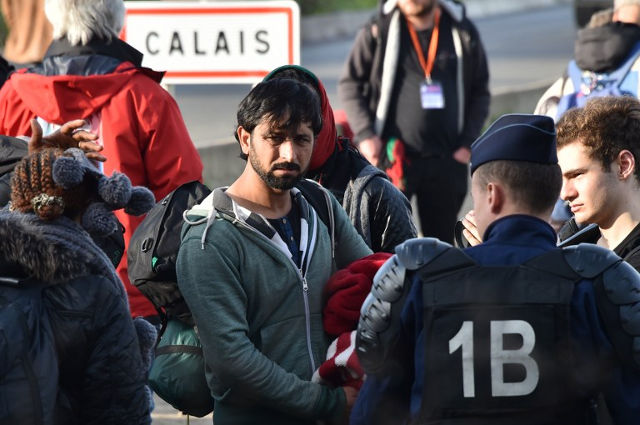 CALAIS, France –  Dozens of migrants, including children, were left wandering Thursday, October 27, through France’s “Jungle” camp after sleeping rough on the edges of the burnt-out Calais settlement.

Excavators began tearing down remaining shelters a day after the official operation to clear the camp came to a dramatic end, with fires started by departing migrants ripping through the shanty town.

The interior ministry said nearly 5,600 migrants had been given shelter, either in centers around France or at a container park in the Jungle set aside for young people.

But around 100 young migrants hoping to be moved to Britain were still waiting to know their fate.

The youths, who slept on the ground in biting cold, gathered outside the hangar where migrants were registered in the past 3 days for relocation.

But their path was barred by riot police, who said the center had closed.

“I spent the entire night here!” a young Afghan said. “I am in the queue for minors to go to England. I have family there.”

“I slept here and not in the Jungle as it’s too dangerous,” said 16-year-old Abdelhadi, another Afghan. “The Jungle is finished.”

There was a smaller line for adults waiting to be registered.

The head of the French immigration office told the Agence France-Presse that 10 buses had been kept by to take the last of the migrants away Thursday. “It’s our final offer,” Didier Leschi said.

A mechanical digger and other machines tore at makeshift shelters to clear up the settlement.

The slum outside the port of Calais had smouldered through the night from countless fires, causing some to flee without their possessions.

‘Page has been turned’

Top regional official Fabienne Buccio, announcing the end of the evacuation Wednesday, said a “page has been turned” for the camp, which was a magnet for migrants hoping to sneak onto lorries or trains heading across the Channel to Britain.

But the fate of unaccompanied minors — a source of deep concern and a bitter blame game between Paris and London — was shrouded in uncertainty.

Some 1,500 are being housed temporarily in an on-site park of specially fitted shipping containers that is now full, according to the group France Terre d’Asile, responsible for their care.

“There is no more space in the container camp,” said Pierre Henry, the group’s director.

He told AFP that 40 children were due to be transferred to Britain on Thursday, adding to more than 200 that London took in last week. Another 40 have been sent to a temporary centre in eastern France awaiting news on their cases.

French Interior Minister Bernard Cazeneuve has said that all minors “with proven family links in Britain” would eventually be transferred there.

He added that London had committed to reviewing all other cases where it was “in the child’s interest” to settle across the Channel.

‘We left our nations in flames’

Most of the migrants hoping to reach Britain had fled conflict or persecution in countries such as Eritrea, Sudan and Afghanistan.

“We left our nations behind us in flames, only to find the Jungle go up in flames too,” said Aziz Yaacoub, a 25-year-old from the troubled Sudanese region of Darfur.

The authorities have said those who agree to be moved can seek asylum in France.

Estimates of the camp’s population ranged between 6,400 and 8,100 before the operation began Monday.

Migrants and officials alike said the fires in the camp were set deliberately, while gas cylinders previously used for cooking had exploded and caused the blazes to spread.

Police said four migrants had been arrested on suspicion of arson.

– Diehards -Many locals fear new settlements will simply spring up in the area once the Jungle is razed.

Calais Mayor Natacha Bouchart said the announcement of the end of the camp was premature, pointing to the remaining unaccompanied minors and perhaps hundreds of former residents who have slipped out into the surrounding area.

“We have to be vigilant and make assurances that the camp is not replicated (and) stop migrants coming back,” the right-wing mayor said. – Rappler.com