Oct 28, 2016 10:22 AM PHT
Agence France-Presse
Facebook Twitter Copy URL
Copied
UN Secretary-General Ban Ki-moon demands an immediate probe into the October 26 attack on the school in rebel-held Idlib province that he says 'may amount to a war crime' 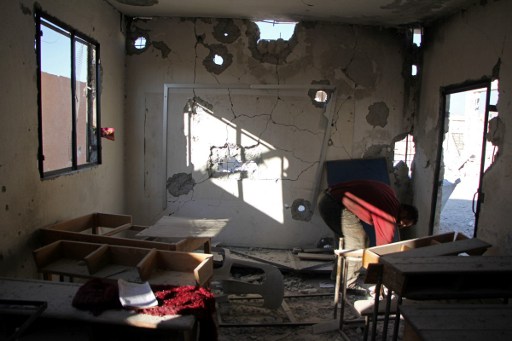 BEIRUT, Lebanon – Russia Thursday, October 27, denied any involvement in deadly air strikes on a Syrian school and rejected a UN-led investigation showing its ally Damascus had carried out chemical attacks, as Moscow’s relations with the West took another hit.

UN Secretary-General Ban Ki-moon demanded an immediate probe into Wednesday’s attack on the school in rebel-held Idlib province that he said “may amount to a war crime”.

The tensions mounted a day after the United States and Britain said they expected an assault in the next few weeks to drive the Islamic State jihadist group out of Raqa, its de facto capital in Syria.

Syria’s conflict broke out in March 2011 with peaceful protests against President Bashar al-Assad’s government but has evolved into a complex war involving regional and international powers that has killed more than 300,000 people.

One complication has been the involvement of Turkey, whose President Recep Tayyip Erdogan announced his country’s military operation supporting Syrian rebels will also target Raqa.

Russia, whose military intervened in Syria in September 2015, denied having any role in air strikes on the school that the UN children’s agency UNICEF said killed 22 students and 6 teachers.

“The Russian Federation has nothing to do with this terrible tragedy, with this attack,” foreign ministry spokeswoman Maria Zakharova said.

Zakharova said claims Russian and Syrian warplanes had conducted the strikes were “a lie”.

He said photographs taken by a Russian drone showed that the roof of the school reportedly hit in the strikes showed no damage and that there were no craters attributable to bombs in the area.

According to the Syrian Observatory for Human Rights monitor, “warplanes – either Russian or Syrian – had carried out 6 strikes” in the Idlib provincial village of Hass, including on the school complex.

French Foreign Minister Jean-Marc Ayrault was not convinced by the Russian denials.

“Who is responsible? In any case it is not the (Syrian) opposition, as to bomb you must have planes. It is either the Syrians, the regime of Bashar al-Assad, or the Russians,” Ayrault said in Paris.

Idlib province, controlled by an alliance of rebel groups and jihadists, is regularly bombed by Syrian and Russian warplanes but air strikes have intensified in recent weeks, according to the Observatory.

On a nearby front, Konashenkov said Russian and Syrian air forces had not conducted any flights in a 10-kilometer zone around Aleppo for the past 10 days.

Children were reportedly caught in the crossfire again Thursday, with state media saying at least 6 were killed and 15 wounded in rebel rocket attacks on the government-held west of Aleppo city.

The rocket fire hit two west Aleppo neighborhoods, with one of the attacks striking a school, said the official SANA news agency.

Referring to Thursday’s attack on the school, Konashenkov said 3 children were killed and 10 wounded when it was hit by shelling from rebel-held eastern Aleppo.

“Why do UNICEF and some permanent members of the UN Security Council stubbornly refuse to notice this?” he said.

A ceasefire meant to allow evacuations of the besieged rebel-held east of Aleppo ended at the weekend, with Moscow ruling out an extension of the unilateral measure for the time being.

Outside Damascus, meanwhile, a child was among 8 people killed Thursday in government shelling on the rebel-held town of Douma, the Observatory said.

Douma is regularly targeted by government fire, and in recent months regime forces have waged an offensive in the area, which has also been under siege since 2013.

“We believe that the proof is not there for any punitive action to be taken. It’s simply not there,” Russian ambassador Vitaly Churkin told reporters following a closed-door UN Security Council meeting.

With nothing seemingly able to stop the bloodshed, the European Union on Thursday added 10 top Syrian officials to its sanctions blacklist for their role in the “violent repression” of civilians. Their names are to be released at a later date.

Suggestions they might also sanction Russia were dropped after sharp differences emerged. – Rappler.com