Belgium drama over, EU and Canada to sign trade deal 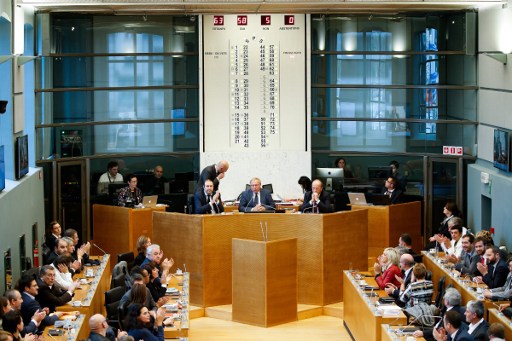 BRUSSELS, Belgium – EU nations approved a landmark free-trade deal with Canada late Friday, October 28, clearing the way for its signing after a drama that saw Belgian regions threaten to torpedo years of negotiations.

“Mission accomplished!” European Union president Donald Tusk tweeted, announcing that the deal would be signed at a summit in Brussels on Sunday, October 30, with Canadian Prime Minister Justin Trudeau.

The Canadian premier wrote back on Twitter: “Great news and I’m looking forward to being there.”

I've just spoken with @eucopresident Tusk – the Canada-EU Summit will be Sunday. Great news and I'm looking forward to being there. #CETA

In a phone call with Tusk, he hailed the deal as “a good sign in an uncertain world”, an EU source said.

Trudeau also tweeted applause for Chrystia Freeland, Canada’s trade minister, thanking her for her “skill and dedication in negotiating a deal to grow Canada’s middle class and strengthen our economy”.

Officially known as the Comprehensive Economic and Trade Agreement (CETA), the deal removes 99% of customs duties between the two sides, linking the single EU market of 500 million people with the world’s 10th largest economy.

Sunday’s signing summit will begin at 0930 GMT, with the signing due at 1100 GMT, Tusk’s spokesman Preben Aamann said on Twitter.

Just days ago the CETA deal – the most ambitious ever negotiated by the EU – had been hanging by a thread due to protests from Belgium’s Wallonia region and other French-speaking communities over its potential damage to local interests.

The trade agreement requires all 28 EU member states to endorse it and in some cases – as in Belgium – regional governments also have to give their approval, meaning Wallonia and the other holdouts were effectively blocking the deal.

Trudeau had been due to arrive in Brussels on Thursday, October 27, to sign the deal but that had to be called off, with leaders including Tusk warning that the debacle was further damaging EU credibility following Britain’s shock vote to leave the bloc.

Belgian Prime Minister Charles Michel held marathon talks in a bid to win the holdout regions over, finally announcing Thursday that the two sides had reached a deal.

Belgium became a lightning rod for warnings that the EU’s international standing, hit by a migration crisis as well as the Brexit vote, would suffer further if 7 years of trade negotiations were to go to waste.

After hitting deadlock in talks with Walloon leaders last week, an emotional Freeland dismissed Brussels as “incapable” of achieving an international agreement.

Paul Magnette, head of the southern French-speaking Wallonia, had fought for the region’s farming interests and guarantees against international investors forcing governments to change laws against the wishes of the people.

While Michel has said the fraught talks with Wallonia “did not change a comma” in the deal, Magnette says he walked away with assurances from the federal government of strengthened social and environmental protection.

The EU was cleared to sign the pact shortly after Wallonia’s parliament voted to approve the deal, along with that of the Brussels-Capital region and the Federation Wallonia-Brussels.

Once signed, the pact will go into effect on a provisional basis, pending full member state ratification – a process that could take years.

But Prime Minister Robert Fico of Slovakia, which currently holds the EU presidency, hailed the delayed approval of the deal as “a milestone in the EU’s trade policy”.

“It has the potential to set the way forward for future trade deals,” he said.

Hinging on CETA’s outcome are complex EU trade negotiations with other countries, including an even bigger and more controversial proposed deal with the United States known as the Transatlantic Trade and Investment Partnership (TTIP).

In his speech to parliament, Magnette warned that Wallonia would never accept a trade treaty that does not have the same guarantees as those in the new CETA.

“From now on, we can draw the lesson: with CETA improved, TTIP is dead and buried”, he said. – Rappler.com