WASHINGTON DC, USA – In a White House race featuring the two most unpopular major party candidates in modern US history, a trio of fringe candidates – all polling in the single digits – will also feature on the ballot.

Here are short profiles of the 3 contenders who will challenge Republican Donald Trump and Democrat Hillary Clinton for the presidency on November 8. Gary Johnson’s longshot bid for the White House might be defined by his “Aleppo moment.”

As late as August, the Libertarian candidate was polling a respectable 9%.

But the former New Mexico governor was stumped when asked on air last month how he would address the humanitarian crisis in Syria’s besieged city of Aleppo.

“And what is Aleppo,” he asked, prompting his shocked interviewer to respond, “You’re kidding.”

It was a black eye for his campaign.

Johnson suffered another setback a few weeks later when he was unable to name a foreign leader he admires. He called the brain freeze “an Aleppo moment.”

The 63-year-old is running on a platform of small government, tax cuts, balancing the federal budget and reducing military intervention abroad, paired with a liberal outlook on social issues.

Johnson is open about being a marijuana user and a proponent of allowing states to decide for themselves whether to legalize medical and recreational marijuana.

“As president, I will not indulge in anything,” Johnson told the New Yorker magazine. “I don’t think you want somebody answering the phone at two o’clock in the morning – that red phone – drunk, either. Better on the stoned side, but I don’t want to make that judgment.”

Johnson ran for president in 2012, initially as a Republican before joining the Libertarian Party and becoming the party’s nominee. He finished with about 1.3 million votes – the strongest-ever result for the Libertarians.

He currently has about 6% support, according to the RealClearPolitics average of national polls.

But Johnson sees presidential politics as a long game.

“It’s similar to the legalization of marijuana,” he told the New Yorker. A medical doctor who spent most of her career fighting for environmental causes, the Green Party’s Jill Stein is offering another option to voters disdainful of both main-party candidates – but one which few Americans are buying.

Stein has never held state or national office, but that hasn’t stopped her from carrying forward with a boldly progressive platform.

“In this election, we are deciding not just what kind of a world we want, but whether we will have a world at all,” the 66-year-old environmentalist said in a recent Fortune magazine commentary.

Stein, who also ran in 2012, stands no chance of winning, with only 2% of the likely vote, according to the RealClearPolitics national polling average.

Those numbers come on the back of a campaign that has garnered relatively limited media attention, in an election dominated by the bitter Trump-Clinton showdown.

Stein and her running mate, human rights activist Ajamu Baraka, are calling for “a WWII-scale national mobilization to halt climate change,” with the aim of transitioning to 100% clean, renewable energy by 2030.

She has also promised to cut military spending in half, create a living-wage job for every American and eliminate student debt.

Stein had hoped to capitalize on disenchanted millennials who supported Bernie Sanders’ run for the Democratic nomination, but has been largely unable to draw anything close to the Vermont senator’s massive crowds.

The one time Stein’s campaign made waves nationally was in early September when criminal charges were filed against her for allegedly spray-painting a bulldozer in North Dakota during a protest against an oil pipeline opposed by Native Americans.

The Chicago-born, Harvard-educated physician has also taken heat for implying that she sympathizes with Americans who question the merits of vaccinations. 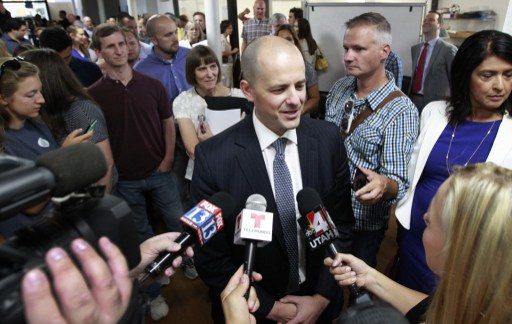 Evan McMullin, a former Republican policy wonk in the House of Representatives, was little known when he jumped into the White House race in August.

But the 40-year-old Mormon has gained traction in his native Utah and beyond as an independent touting a “new conservative movement” among voters unhappy with both mainstream candidates.

“It’s never too late to do the right thing, and America deserves much better than either Donald Trump or Hillary Clinton can offer us,” the former CIA counterterrorism operative said in announcing his candidacy.

“I humbly offer myself as a leader who can give millions of disaffected Americans a better choice for president.”

McMullin presents a serious challenge to Trump in Utah, a traditional Republican bastion where the party nominee has faltered badly among the Mormon faithful who make up 60% of the state population.

If he wins in Utah, it would be the first time since 1964 that a Republican loses the staunchly conservative state.

McMullin also stands to make history as the first 3rd-party candidate to win a state since segregationist George Wallace in 1968.

The former Goldman Sachs investment banker resigned from his job in Congress to run in a campaign backed by Better for America, a nonprofit organization supporting rivals to Trump and Clinton.

McMullin is on the ballot in Utah and 10 other states, including neighboring Idaho, Colorado and New Mexico, and is a write-in candidate in many states.

Trump supporters have labelled him a “Mormon Mafia Tool” but McMullin pushed right back this week, tweeting: “The strength of @TeamMcMullin is that we’re the #MormonMafia…& the Jewish, Catholic, Evangelical, Hindu, Muslim, or no Mafia Mafias!” – Rappler.com