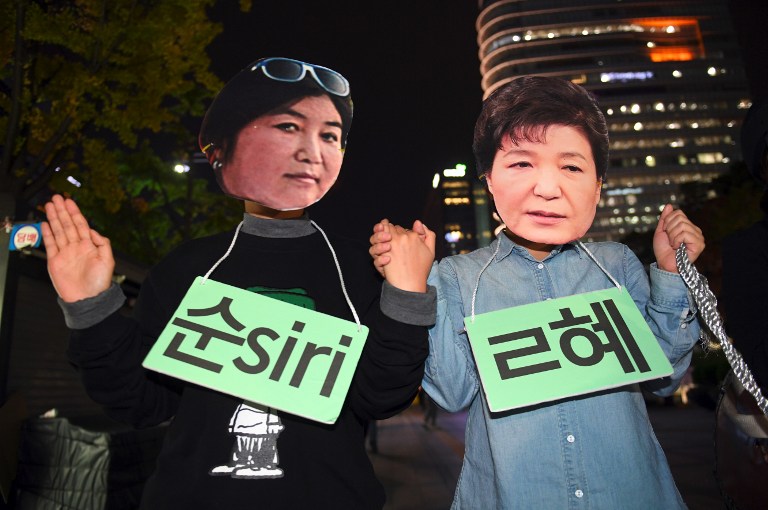 With just over a year left to run, Park’s presidency has suddenly unravelled over shocking revelations of how she allowed a close personal friend, with no official position, to meddle in affairs of state.

Over the past week, the media has been full of increasingly sensational reports regarding Choi Soon-Sil, the 60-year-old daughter of a shadowy religious leader and one-time Park mentor.

Invoking a lurid back-story of religious cults, shamanist rituals and corruption, the reports have portrayed Choi as a Rasputin-like figure whose influence over Park extended to vetting her presidential speeches and advising on key appointments and policy issues.

On Saturday morning, prosecutors confiscated computers and documents from the homes of a top presidential adviser and two other aides as well as a deputy culture minister, Yonhap news agency said.

The raids came hours before thousands took to the streets of central Seoul in a candle-lit rally, denouncing Choi as a dangerous charlatan and calling on Park to step down.

“I came here today to show how angry I am,” said Lee Ji-Hu, a 33-year-old housewife from Gimpo, northwest of Seoul, accompanied by her husband and two infant children in strollers.

“How can a leader have a shaman, or someone linked to a religious cult as a secret advisor and let her handle state affairs and squander taxpayers’ money like that?” Lee said.

“I feel so ashamed … I can’t let our country where my children will live be corrupted like this,” she added.

Choi is being formally investigated for using her ties to Park to strong-arm major conglomerates into donating funds to two non-profit foundations she set up.

But the real focus of public anger has been the extent to which Park – the daughter of South Korea’s late military leader Park Chung-Hee – apparently allowed herself to be controlled by a such a cult-like figure.

The head of the main opposition Minjoo Party said it was like discovering you were being ruled by a “terrifying theocracy”.

Choi is the daughter of the late Choi Tae-Min, who married six times, had multiple pseudonyms and set up his own religious group known as the Church of Eternal Life.

Choi Tae-Min first befriended a traumatised Park after the 1974 assassination of her mother, who he said had appeared to him in a dream, asking him to help her daughter.

Choi Soon-Sil’s ex-husband served as a top aide to Park until her presidential election victory in 2012.

Choi left the country for Germany in early September as reports of her alleged influence-peddling began to emerge.

Her lawyer has said she is well aware of the gravity of the situation and was willing to return home “to be punished if she did anything wrong”.

Prosecutors have detained two people close to Choi for questioning, including one who told reporters that Choi had been behaving as Park’s de-facto regent. – Rappler.com