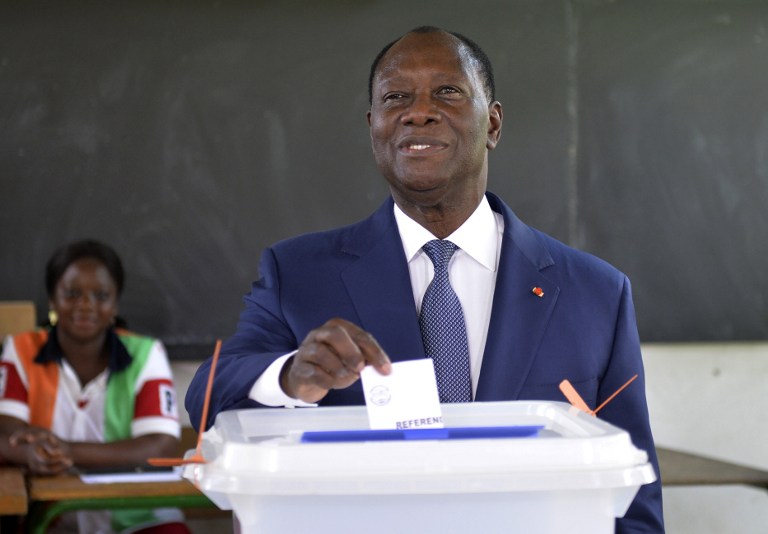 ABIDJAN, Ivory Coast – Ivorians were voting on Sunday, October 30, to determine the fate of constitutional changes the president says will help end years of unrest, with scuffles erupting at several polling stations.

The package put to the country’s 6.3 million voters has alarmed the opposition, which is boycotting the polls, and left much of the electorate confused, analysts say.

Commentators say turnout for the referendum is the main question, as there seems to be little doubt the changes will be approved.

President Alassane Ouattara’s revised constitution would create the post of a vice president, and set up a senate, a third of whom would be nominated by the head of state.

It would also suppress a contested clause on national identity – the so-called “Ivorian-ness” clause which took effect in 2000 and stipulates that both parents of a presidential candidate must be born on Ivorian soil and not have sought nationality in another country.

The issue of identity has contributed to years of unrest in the West African country, which suffered a coup in 1999, a civil war in 2002 that split the country between its north and south, and a bloody post-election crisis in 2010.

The electoral crisis led to months of post-poll bloodshed with then-president Laurent Gbagbo refusing to step down.

Some 3,000 people died and Gbagbo is now on trial in The Hague for crimes against humanity.

Shortly after the polls opened at 0800 GMT, trouble broke out in the economic capital Abidjan and elsewhere, with groups of youths storming several voting stations and damaging equipment, Interior Minister Hamed Bakayoko said.

But overall, he said, the referendum was “going well.”

Casting his ballot on Sunday at an Abidjan school, Ouattara appeared confident.

“It is essential for our nation’s future to turn the page on the crisis created by the constitution of the year 2000,” he said.

Ouattara hails from central Ivory Coast but his father was born in neighboring Burkina Faso and the issue of “Ivorian-ness” raised a hurdle in his bid for the presidency.

The proposed new constitution, which parliament has overwhelmingly approved, would see the creation of the post of vice president, who would appear on the ballot with presidential candidates.

The government claims the idea is to ensure continuity if the head of state dies or is incapacitated.

Critics have speculated that Ouattara is trying to line up a successor for when his term ends in 2020. The opposition sees the change as a “monarchistic tactic.”

Ouattara “is treating Ivory Coast as if it were his personal property,” said Pascal Affi Nguessan, head of the Ivorian Popular Front, the opposition party founded by Gbagbo.

“What he is offering is less than a constitution. It is a will and testament designed to distribute his country to his successors so it stays in the family.”

Some voters welcomed the chance to have their voices heard.

“I am voting for the sake of my children,” 61-year-old TV repairs man Soro Seydou told AFP in the nation’s second city Bouake.

Others, however, vowed to stay away.

“What we care about is the high cost of living, and escaping poverty. The constitution won’t change anything. I won’t go to vote,” said Bamory Kone, a mechanic in a working class district of Abidjan.

“There is little engagement,” said researcher Meite Mamoudou who, like many observers, expects that many simply wouldn’t bother to vote.

US-based Human Rights Watch has warned that despite the campaigning, many Ivorians are still none the wiser about what they are voting for.

Voting was to close at 1800 GMT. An electoral commission source said the counting should be finished “by the end of Monday, Tuesday at the latest.” – Rappler.com