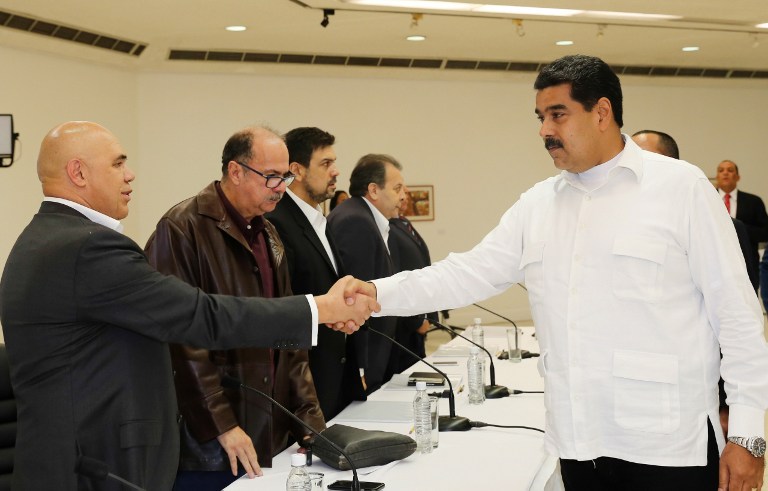 Among those on hand for the Vatican-backed talks held on the outskirts of Caracas were President Nicolas Maduro and members of the opposition, including Jesus Torrealba, the leader of the Democratic Unity Roundtable (MUD) umbrella group.

Vatican envoys were also present for the meeting, which is the first open dialogue between the sides in nearly a year.

“I hereby stress my total commitment to this dialogue process. I am reaching out, extending my hand to talk with the MUD,” Maduro said.

“Let us do our utmost to move forward in a progressive, sustained way,” he stressed. The MUD did not immediately have its turn to speak.

Maduro’s opponents blame him for an economic crisis that has caused food shortages and riots in the oil-rich country.

The start of the talks has been fraught with disagreement among the opposition coalition, which voiced suspicion of Maduro even as it confirmed it would attend.

The MUD agreed to join in talks with feelings of “skepticism and distrust,” Torrealba said in a statement late Saturday.

His side blames Maduro for the country’s economic crisis and wants a referendum on removing him from office.

Maduro’s Foreign Minister Delcy Rodriguez said the talks would go ahead Sunday “to contain actions that aim to overthrow the Venezuelan government by unconstitutional and undemocratic means.”

It is the first official dialogue between the sides since the opposition took control of the legislature in January.

Since then, Maduro has persistently vowed to resist its efforts to unseat him.

He announced the plan for a “national dialogue” last Monday, October 24, after an audience with Pope Francis.

The proposal appeared to sow divisions among the opposition. Some senior MUD leaders rejected the move as a ploy.

When the authorities blocked the MUD’s drive for a recall referendum against Maduro, it vowed to hold a political trial against him.

Maduro responded by threatening to jail his political enemies.

Agreeing to join the talks, Torrealba reiterated the MUD’s demands that the government respect the constitutional right to a referendum, and that it free imprisoned MUD activists.

“This meeting could yield important agreements that could de-escalate the conflict,” he said.

But leaders of some of the parties in the MUD warned that the “conditions are not in place for dialogue.”

“The government insists on blocking all the peaceful, constitutional and democratic means” for settling the crisis, they said in an open letter to Torrealba.

The Catholic Church in Venezuela called in a statement for the sides to go ahead with Sunday’s meeting “to avoid a spiral of violence that would increase the suffering of our beloved people.”

Venezuela has the world’s largest oil reserves, but is suffering a deep economic crisis sparked by falling crude prices.

The International Monetary Fund estimates inflation in Venezuela will hit 475% this year.

Analysts have warned of a risk of unrest in this South American country of 30 million people.

Opposition protests on Wednesday drew hundreds of thousands of people. The MUD vowed another demonstration next Thursday at the presidential palace.

Vice President Aristobulo Isturiz warned that government supporters would “be there waiting.”

The palace was the scene of a short-lived coup attempt in 2002 against Maduro’s late predecessor and mentor, Hugo Chavez.

Senior opposition leader Henrique Capriles host back that: “We have a legitimate right to demonstrate at any public building – to demand that the constitution be respected.” – Rappler.com