Nov 1, 2016 10:28 AM PHT
Agence France-Presse
Facebook Twitter Copy URL
Copied
(UPDATED) Pope Francis holds a public mass for the Catholic minority in Sweden, a Lutheran but secular country where same-sex marriage is allowed even for priests 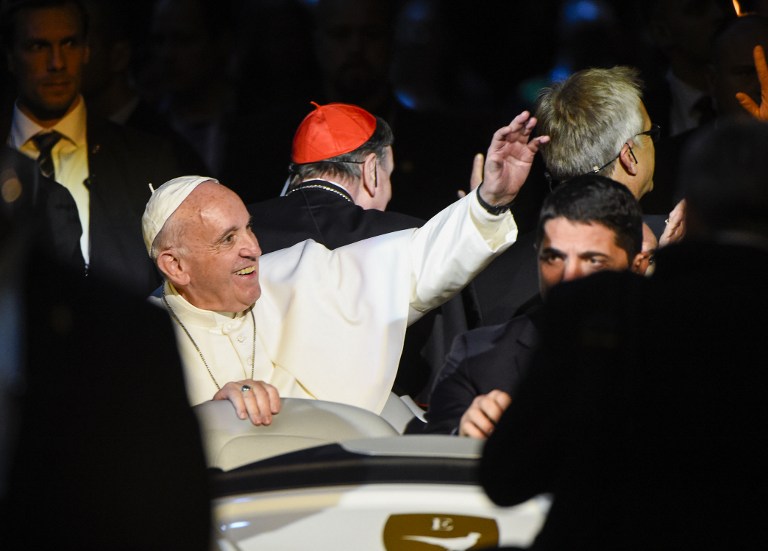 MALMO, Sweden (UPDATED) – Pope Francis held a public mass on Tuesday, November 1, for the Catholic minority in Sweden, a Lutheran but secular country where same-sex marriage is allowed even for priests.

The Argentine pontiff addressed an estimated 15,000 members of the country’s Roman Catholic minority, many of them converts or migrants, at a stadium in the southern Swedish town of Malmo, home to a large immigrant population.

“Meekness is a way of living and acting that draws us close to Jesus and to one another. It enables us to set aside everything that divides and estranges us, and to find ever new ways to advance along the path of unity,” Pope Francis said, according to an official translation of his remarks.

“One very eloquent sign of this is that here in your country, marked as it is by the coexistence of quite different peoples, we are jointly commemorating the fifth centenary of the Reformation,” the pope said before he headed back to Rome.

A fervent advocate of Christian unity, Francis visited the southern city of Lund on Monday for an ecumenical service marking the start of a year of celebrations for the Reformation – the dramatic 1517 event that created a Protestant branch of Christianity which rebelled against papal rule.

The event in Lund, where the Lutheran World Federation was founded in 1947, also marked 50 years of reconciliatory dialogue between the Catholic Church and Lutheranism, a tradition once fervently hostile to the authority and teachings of the Vatican.

Together with Sweden’s female archbishop Antje Jackelen and other Lutheran leaders, the pope expressed deep regret over the schism and called for unity.

Hailed as “a breath of fresh air” by Lutheran leaders, Francis raised hopes early in his papacy that he might steer the Church towards greater acceptance of homosexuality, and in June he said Christians “must apologize” to gays and lesbians for their past treatment.

Anders Arborelius, bishop of the Roman Catholic Church in Stockholm who himself converted from Lutheranism, said the pope’s approach had been one of continuity, despite a “progressive” image compared to his predecessors.

“Pope Francis comes from another continent and has a different way of expressing things, but one cannot say that he has changed anything in the teachings,” he told AFP.

Sweden’s Lutheran Church is among the most liberal in Christendom.

A pioneer in women’s and LGBT rights, it has been appointing female priests since 1960, a step the Catholic church is still reluctant to take.

“I think the Catholics have to change. We need women priests,” Ingeborg Stenstrom, a Catholic and retired doctor from Germany who lives in Sweden, told Agence France-Presse.

The Swedish Lutheran church says it currently has 6.2 million members, over 60% of the population.

But as fewer Swedes believe or practice religion – and refuse to pay a tax collected for religious groups – the church has lost 550,000 members in 10 years.

Henrik Glamsjo, a Lutheran pastor who attended the mass, said he was going to convert to Catholicism, claiming the government interfered in church affairs despite the separation of church and state in 2000.

“The Church of Sweden is still controlled by politicians. They interfere in liturgies and mass,” he told Agence France-Presse. “There is a problem of unity.”

Catholicism is on the rise in Sweden.

The rise has largely been driven by immigration.

Immigrants have mainly come from war-torn countries such as present-day Syria and Iraq, Lebanon in the 80s, and Latin America in the 60s and 70s, according to church registrar Louis Michel. – Rappler.com