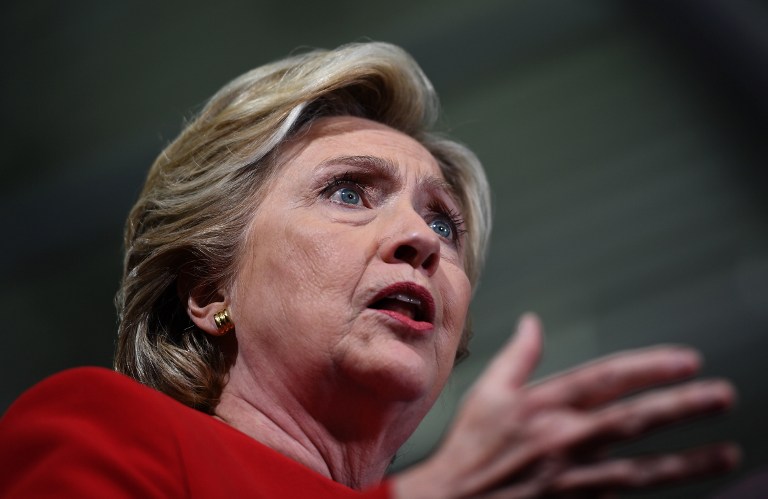 CINCINNATI, USA – Initially caught off guard, Hillary Clinton’s campaign has swung between defiance, counter-attack and painting Donald Trump as a mortal danger since the FBI director revived her email scandal.

The decision, announced by James Comey in a letter to lawmakers last Friday, October 28, initially dumbfounded Clinton and her allies, throwing what was already America’s ugliest presidential election into spasms of shock.

Clinton was at the time on a plane with malfunctioning wifi and, according to the Los Angeles Times, in the company of a childhood friend as she seemingly cruised toward an easy victory over Donald Trump.

An aide said the former secretary of state, first lady and senator took it “like a champ” but the campaign is furious about the renewed focus on her use of a private email server and frustrated that Comey has still not provided answers to them – or the public.

An angry campaign chairman John Podesta went on the attack, the most senior Democrat in the Senate said Comey may have broken the law and campaign manager Robby Mook decried what he called a “double standard.”

On Monday, October 31, Team Clinton pounced on a CNBC report which quoted an anonymous former FBI official as saying Comey thought it was too close to Election Day to name Russia as meddling in the election.

“That Director Comey would show more discretion in a matter concerning a foreign state actor than one involving the Democratic nominee for president is nothing short of jaw dropping,” Mook said.

But the woman poised to make history as America’s first female president, humiliated 20 years ago by her husband’s dalliance with an intern and long hounded by Republicans, is nothing if not resilient.

The chorus of her campaign theme song – “I’ve still got a lot of fight left in me” – sums up Clinton perfectly.

Outwardly she has appeared relaxed and confident on a breakneck campaign tour in the battleground states of Florida and Ohio.

Boarding her plane on Monday, reporters caught a glimpse of her smiling, holding up a Halloween mask to her face.

But the absence of one of her closest confidantes, the woman she has described as being akin to a second daughter, from her side for the last three days is a sign that Clinton is taking nothing for granted.

According to US media reports, Comey’s probe was renewed after agents seized a laptop used by the aide, Huma Abedin, and her now estranged husband, Anthony Weiner.

Abedin was photographed taking her son to school Monday and some media outlets are speculating whether she is still destined for a plum job in the White House, should Clinton win.

In public Clinton initially called on the FBI to explain its decision without delay. On Saturday she upped the pressure on Comey, calling his move “deeply troubling” and “unprecedented.”

But by Monday, when polling data appeared to show that few voters were bothered by the news, she appeared more sanguine.

‘Not a deal breaker’

“I’m not making excuses. I’ve said it was a mistake and I regret it,” she said of her decision to use a private email server while secretary of state, which sparked the initial FBI investigation.

But apart from a brief news conference on Friday, she has not spoken to the up to three dozen reporters traveling with her campaign.

She has ignored shouted questions while boarding and deplaning her Boeing 737, instead smiling and waving to photographers.

Meanwhile she has upped the ante against Trump, painting him as a dangerous hot head who cannot be trusted with the nuclear codes.

She was introduced at a campaign stop in Kent, Ohio by a former nuclear missile launch officer who helped organize an open letter against the Republican nominee.

“Imagine him plunging us into a war because somebody got under his very thin skin. I hope you’ll think about that when you cast your vote,” Clinton told a rally in Cincinnati.

It is a message that her supporters are hearing loud and clear, undeterred by Comey’s announcement and convinced the maverick billionaire is a far worse candidate.

“This email controversy is not a deal breaker for me,” said Crystian Wiltshire, a 26-year-old actor from Kentucky living in Cincinnati.

“Whereas on the other side, the comments that have been made, his (Trump’s) history as a businessman, those things can be classified as deal breakers,” he said.

“For her to find some way to ruin that within a week’s time, I think that’s impossible at this point.” – Rappler.com