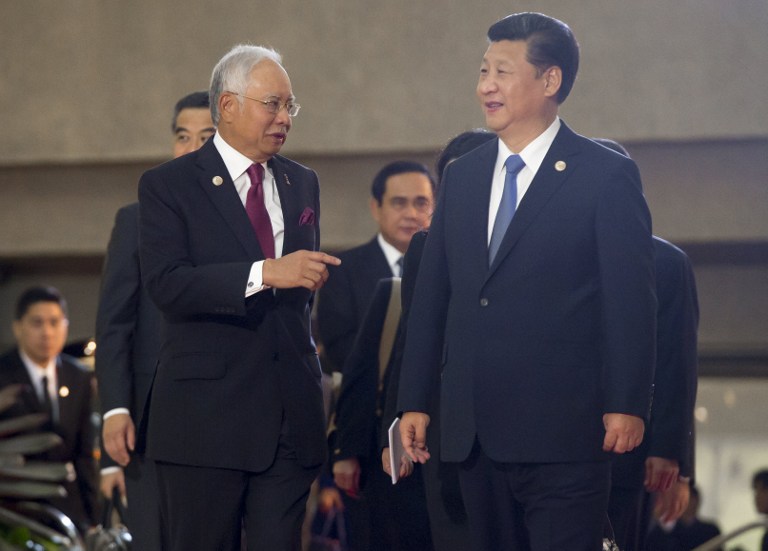 BEIJING, China (UPDATED) – Malaysia and China signed a defense deal and pledged closer cooperation in the South China Sea Tuesday, November 1, signalling a potential strategic shift by Premier Najib Razak as his ties with the United States fray over a corruption scandal.

Meeting at Beijing’s Great Hall of the People, Najib and his Chinese counterpart Li Keqiang witnessed the signing of nine agreements spanning defence, business and other spheres.

“I believe this visit will bring our bilateral ties to a new high… a historic high,” Najib said prior to meeting with Li.

Asked for details of the defence arrangement, Chinese vice foreign minister Liu Zhenmin said that the two countries were “focusing on naval cooperation,” adding that the deal “marks a big event in our bilateral ties.”

China and Malaysia have an outstanding territorial dispute in the South China Sea, which is claimed almost in its entirety by Beijing.

Parts of the vast maritime region are also claimed by the Philippines and Vietnam, among others, who have found themselves caught in an increasingly tense dispute between the US and China over Beijing’s construction of military-capable artificial islands in the region.

Though he subsequently backed off, saying their alliance remained intact, the episode underlined China’s increasing diplomatic and economic gravitational pull at the expense of the United States.

“This is the new regional norm. Now China is implementing the power and the US is in retreat,” she said, adding Washington’s Asia “pivot” was “dead in the water”.

Taking office in 2009, Najib reached out to Washington, and relations warmed following decades of periodic distrust.

But he has increasingly leaned toward China as it became Malaysia’s biggest trading partner, and especially after the eruption last year of a massive corruption scandal implicating Najib and a state investment fund he founded.

Billions are alleged to have been syphoned from the fund, 1MDB, in a stunning international campaign of embezzlement and money-laundering that has sparked investigations in several countries.

Najib’s ties with Washington became strained when the US Justice Department moved in July to seize more than $1 billion in assets it says were purchased by Najib relatives and associates using stolen 1MDB money.

Justice Department filings said a “Malaysian Official 1” took part in the looting. Malaysia has since admitted that official was Najib.

Najib and 1MDB deny wrongdoing and have railed at foreign forces they say concocted the scandal.

“This trip reflects not only Malaysia’s geostrategic re-alignment to China as the ‘regional banker’ but also the reality that Najib is desperate for alternative financial sources,” Welsh said.

China has increasingly won major infrastructure and other projects in Malaysia.

Among the agreements was one to build a new rail line on Malaysia’s east coast.