Nov 2, 2016 8:53 AM PHT
Agence France-Presse
Facebook Twitter Copy URL
Copied
(UPDATED) The move is part of a planned reshuffle of senior civil servants and ministers aimed at setting up a cross-party 'neutral' cabinet and assuaging public anger with the president and her administration 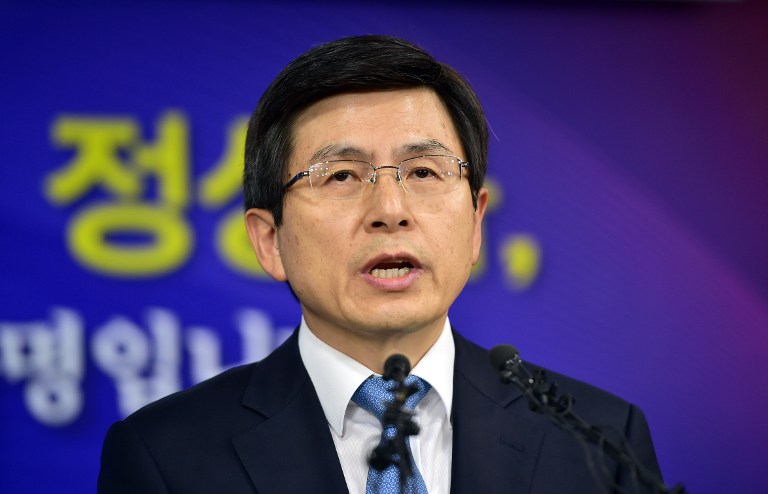 The top-level reshuffle, which also saw a new public safety minister, was the latest attempt to appease growing public anger with the president and her administration.

Park has been engulfed in a political storm over allegations that she allowed long-time friend Choi Soon-Sil, who holds no political position, to vet her speeches and have a voice in policy decisions – including cabinet appointments.

Choi is currently being detained and questioned by prosecutors over her links to Park and other allegations of influence-peddling and embezzlement.

A spokesman at the Seoul Prosecutors Office said a formal request had been made Wednesday to a local court to issue an arrest warrant for Choi on charges of fraud and abuse of power.

The fraud relates to allegations that Choi – who is already in emergency detention – used her friendship with Park to strongarm companies like Samsung into donating large sums to non-profit foundations Choi set up and used for her personal gain.

The spokesman said the “abuse of power” charge – usually restricted to government officials – was based on allegations that Choi worked with one of Park’s top presidential aides, Ahn Jong-Beom, to secure the corporate donations.

Ahn, who was forced to resign at the weekend, presented himself for questioning by prosecutors earlier Wednesday.

A presidential spokesman said Prime Minister Hwang Kyo-Ahn had been replaced “in connection with the current situation.”

The new premier was named as Kim Byong-Joon, a former top aide to the late liberal president Roh Moo-Hyun.

The prime minister is a largely symbolic post in South Korea, where power is firmly concentrated in the presidency.

It is the only cabinet post requiring parliamentary approval. Opposition parties said the reshuffle was a smokescreen and suggested they would block Kim’s nomination.

“People demanded that the president get rid of the Choi Soon-Sil-controlled cabinet, but this is just a second Choi Soon-Sil cabinet,” a spokesman for the main opposition Democratic Party said.

The media has portrayed the 60-year-old Choi as a Rasputin-like figure, who wielded an unhealthy influence over Park that continued after her presidential election victory in December 2012.

Suggestions that she interfered in government policy and was given access to classified documents have exposed Park to public anger and ridicule and, with just over a year left in office, seen her approval ratings plunge into the single digits.

On Tuesday, November 1, a man rammed an excavator into the building where Choi was being questioned by prosecutors, saying he wanted “to help Choi die”.

Choi is the daughter of late religious leader Choi Tae-Min, who was married six times, had multiple pseudonyms and set up his own cult-like group known as the Church of Eternal Life.

He befriended a traumatized Park after the 1974 assassination of her mother – whom he said had appeared to him in a dream. Park treated him as a mentor and subsequently formed a close bond with his daughter.

Earlier Wednesday Choi Soon-Sil, who has denied any criminal wrongdoing, was seen entering the Seoul prosecutors’ office for a third day of questioning.

The YTN news channel showed Choi, her face covered with a surgical mask and a dark coat over her prison outfit, disembarking from a bus that brought her from the prison where she had spent a second night in custody.

The scandal has triggered a media frenzy with fresh reports – many of them highly speculative and unsubstantiated – emerging every day, tying Choi and some of her extended family members to more alleged malpractices.

Prosecutors said Wednesday they were also investigating reports that Samsung gave around two million euros to a business Choi had set up in Germany.

A Samsung spokesman said the company would “actively cooperate” with any investigation. – Rappler.com