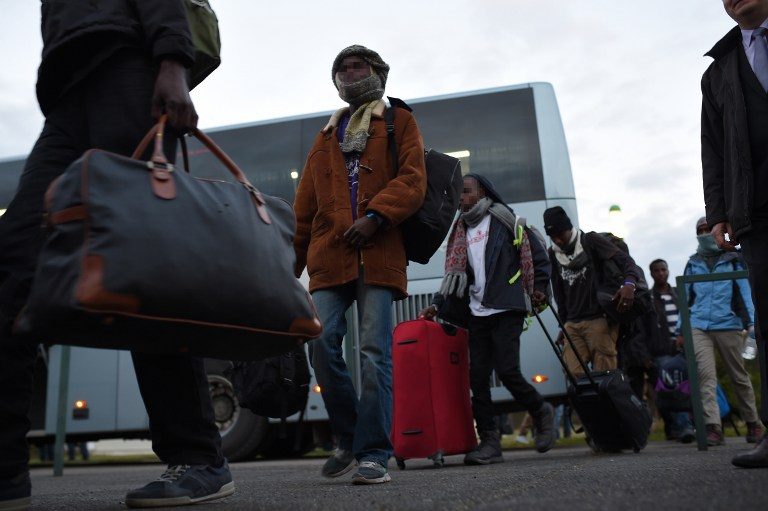 Facebook Twitter Copy URL
Copied
French authorities have said that Britain, which has taken around 300 child refugees from Calais since mid-October and promised to take more, will continue to review applications from minors seeking to be transferred there

CALAIS, France – Over 1,600 unaccompanied minors left in Calais after the demolition of the infamous “Jungle” migrant camp were bussed to shelters across France on Wednesday, November 2, even as many still hoped to be admitted to Britain.

Two days after the last makeshift shelters in the camp were destroyed, buses took 1,616 children, mainly teenagers, away from the container housing where they had slept for the past week.

The first bus carrying 43 minors headed for the town of Carcassonne, around 1,000 kilometers (600 miles) from Calais in southern France. Another was bound for Sainte-Marie-la-Mer, near the Spanish border.

The closure of the container housing is one of the last acts in a major French operation to clear Calais of migrants who have long used the area as a staging post for attempts to sneak into Britain, stowed away on trucks or trains crossing the Channel.

Many of those driven to far-flung parts of France were still dreaming of Britain.

“I can’t say I’m really happy because I don’t know where I’ll end up,” said Ahmed, a 17-year-old from Sudan, before boarding a bus. “But I’m glad to be leaving the Jungle anyway.”

French authorities have said that Britain, which has taken around 300 child refugees from Calais since mid-October and promised to take more, will continue to review applications from minors seeking to be transferred there.

Last week, more than 4,000 mainly Afghan, Eritrean and Sudanese migrants agreed – in some cases reluctantly – to be moved to centers dotted around France where they can seek asylum.

A few hundred minors were among those moved to shelters last week but “around half” of them later slipped away, according to the head of the France Terre d’Asile charity, Pierre Henry.

“They want to return to Calais,” Henry said.

Their departure leaves only around 400 women with young children still living at the site, in a centre run by charities.

The plight of the “Jungle children” had been a sticking point between France and Britain.

France expects Britain to take in the lion’s share of the youngsters who travelled alone to Calais hoping to reach family or friends in England.

Britain has blamed France for the initial delays in the transfers.

The UN Committee on the Rights of the Child on Wednesday accused both countries of passing the buck.

“Disagreements between the French and UK governments over who should take responsibility for the majority of these children have led to major violations of these children’s rights,” the committee said.

Amnesty International said the spat between the two European neighbors sent “an appalling signal to other countries”.

“Shirking responsibility for protecting refugees can only encourage others to shirk too,” the rights group said.

Buccio, the regional security chief, said she expected the minors to know their fate “within three weeks maximum”.

French Prime Minister Manuel Valls said he was “very proud” of how the operation had been executed, saying the asylum-seekers were the French citizens of the future.

The camp represented “an image of France that I don’t want to see – men, women and children living in disgraceful conditions. Welcomed, given the right to asylum, they will be French,” he said at an awards ceremony in Paris.

“They will speak French, they will share our values. Tomorrow, some of them will be lawmakers, members of the government.”

The camp was already demolished in 2009 only to sprout up again in 2015 when migrants from the Middle East and Africa began pouring into Europe in unprecedented numbers.

French President Francois Hollande has vowed an end to all such camps.

But less than 300 kilometers from Calais, around 2,000 migrants are living in conditions similar to those seen in the Jungle, on the streets of Paris.

Authorities are expected to soon clear the camp under a railway bridge in the northeastern Stalingrad district, with a 400-bed temporary shelter set to open in the coming days.

Several hundred people took to the streets in Paris on Wednesday in support of the migrants, chanting “So-, So-, solidarity” and “Police! No!” – Rappler.com