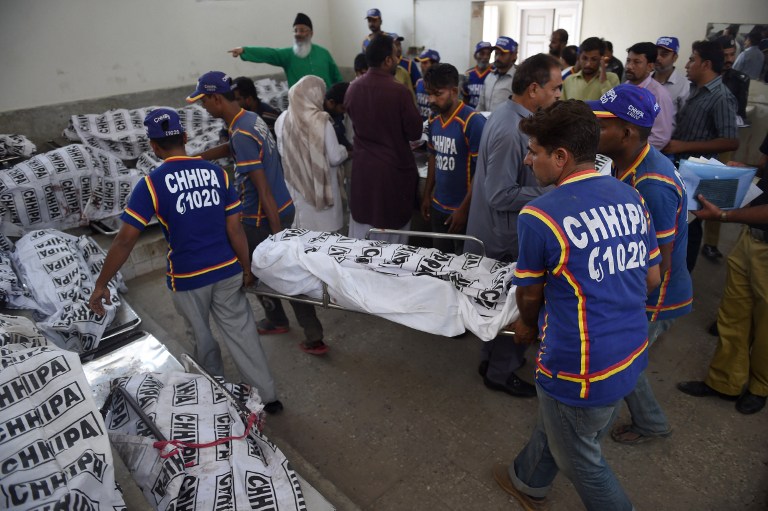 Witnesses described watching in horror as one train sped into the city’s Quaidabad Railway Station and rammed into the second, which was stationary, with the roar of the crash swiftly followed by the screams of people trapped inside.

Officials said rescuers armed with metal-cutting equipment and heavy cranes had managed to pull all the passengers from the twisted wreckage.

“No-one is left inside,” Ijaz Ahmad Khan, a Karachi administrative official, told reporters at the scene.

Many were rushed to Karachi’s Jinnah Hospital, where an Agence France-Presse reporter described horrifying scenes as the injured lay screaming and crying while medics rushed to help them.

“I am dying, I am dying, please, please, I am dying,” cried Abdul Ghaffar, 55, as doctors tried to move his legs and hands. He appeared to have multiple injuries, while his children and wife were also wounded and lay on beds nearby.

Other victims appeared too stunned to talk. Many had head and foot injuries, and at least one man had his leg amputated below the knee.

Casualties were still being counted but there could have been a total of up to 1,000 passengers on board the trains when the accident occurred, said Nasir Nazeer, an administrative official in Karachi.

He said an inquiry has been launched into the cause of the accident.

“The death toll has now risen to 20, the condition of several more is critical,” said Seemi Jamali, a spokeswoman at Jinnah Hospital. Nazeer said up to 60 people had been injured in the crash.

The accident occurred when the incoming “Zakria Express” from the central city of Multan rammed into the “Fareed Express”, from Lahore, as it waited at Quaidabad Station, also known as Jumma Goth, in the Landi neighbourhood of Karachi.

Ajab Gul told AFP he was on his way to his factory job when he witnessed the accident.

“Suddenly another train came speeding in and smashed into the parked train,” he said, describing the sound of the crash as “huge”.

“There were clouds of dust and smog. After that we heard screams. People inside the collided trains were screaming and crying.”

Onlookers rushed to their aid, he said, adding that he had helped pull 17 people, including women and children, from the wreckage.

But, he added, “there were many other people trapped inside… we could not get them out.”

Train services from Karachi to the rest of the country have been suspended.

Rail accidents are common in Pakistan, which inherited thousands of miles (kilometres) of track and trains from former colonial power Britain.

The railways have seen decades of decline due to corruption, mismanagement and lack of investment.

Thursday’s crash was the second this year involving the Fareed Express. In February the northbound train hit a van at a crossing in southern Pakistan, killing eight people from the same family.

The first collision was between two trucks and a bus, accounting for most of the casualties, while the second pile-up involved multiple cars. – Rappler.com