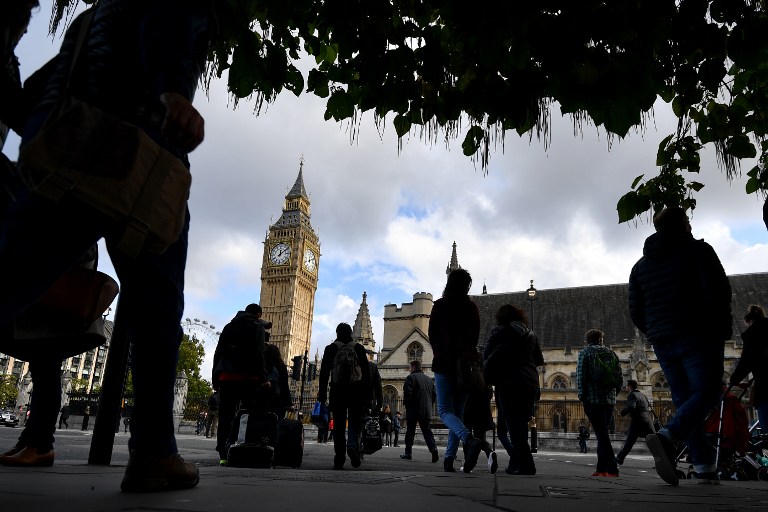 LONDON, United Kingdom (UPDATED) – The High Court struck a blow on Thursday, November 3, to the British government’s plans for leaving the EU, ruling it must seek parliament’s approval before starting exit talks in a landmark judgement that could delay Brexit.

Three senior judges said Prime Minister Theresa May’s government does not have the power on its own to trigger Article 50 of the European Union’s Lisbon Treaty, the formal notification of Britain’s intention to leave the bloc.

May has promised to begin the process by the end of March but the ruling raises the prospect of a protracted parliamentary debate before then, in a chamber which overwhelmingly opposed Brexit and may seek to soften the break with the EU.

The pound – which has tumbled to multi-year low points against its main rivals in recent weeks as markets weigh the economic risks of Britain potentially leaving the European single market – soared against the dollar and euro Thursday, jumping above $1.24.

Bank of England governor Mark Carney, responding during a separately scheduled press conference, said the ruling was “an example of the uncertainty that will characterize this process”.

EU leaders have been pressing for a swift divorce, and May has arranged a phone call with European Commission chief Jean-Claude Juncker on Friday, a commission spokesman said.

The case challenged the government’s right to use “historic prerogative powers” – a type of executive privilege – to trigger Article 50, which begins a two-year countdown to exiting the EU.

“We hold that the secretary of state does not have power under the crown’s prerogative to give notice pursuant to Article 50… for the United Kingdom to withdraw from the European Union,” the judgement said.

May’s Downing Street office said it was “disappointed” at the decision and would appeal, with the case now expected to be heard in the Supreme Court in early December.

“The country voted to leave the European Union in a referendum approved by act of parliament. And the government is determined to respect the result of the referendum,” it said in a statement.

A spokeswoman added: “Our plans remain to invoke Article 50 by the end of March.”

‘Betrayal may be near’

British expatriate Robert Pigney, one of the claimants in the case, told the Agence France-Presse outside the High Court in London that the ruling was “an immense victory for the British people.”

“It’s very important that our elected representatives in parliament remain in control of our future,” said the 22-year-old translator, who grew up in France.

May has previously accused those behind the legal challenge of seeking to frustrate the Brexit process, saying: “They’re trying to kill it by delaying it.”

Pigney said: “The fact that this may block or slow down Brexit is purely coincidental. Our primary focus is that parliamentary democracy be maintained and upheld.”

Another claimant, London-based investment fund manager Gina Miller, said she was “absolutely delighted”, saying it was about having a “proper debate in our sovereign parliament”.

But Nigel Farage, the interim leader of the UK Independence Party who led the campaign for Brexit, warned there would be public outrage if parliament used their power to block the referendum result.

“I worry that a betrayal may be near at hand,” he said.

“I now fear that every attempt will be made to block or delay the triggering of Article 50. If this is so, they have no idea of the level of public anger they will provoke.”

Most members of the House of Commons wanted to stay in the EU, but commentators believe there is no majority support for reversing the referendum result, which was backed by 52 percent of British voters.

“But there must be transparency and accountability to parliament on the terms of Brexit,” he said.

“Labour will be pressing the case for a Brexit that works for Britain, putting jobs, living standards and the economy first.”

May has so far declined to outline her negotiating strategy, insisting that showing her hand would damage her chances of achieving the best outcome.

But she has indicated she will prioritising cutting immigration, a move that EU leaders have warned is incompatible with staying part of the European single market. — Rappler.com