South Korea president agrees to be quizzed in scandal probe 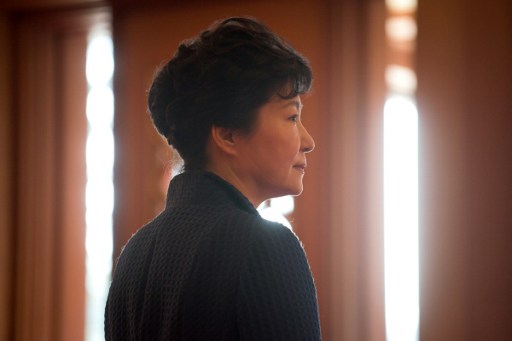 SEOUL, South Korea (UPDATED) – South Korean President Park Geun-Hye on Friday, November 4, agreed to be questioned by prosecutors as she sought to distance herself from a close personal friend at the center of a corruption scandal engulfing her administration.

In her second address to the nation in 10 days, Park acknowledged that she had “allowed my guard to drop” around long-time confidante Choi Soon-Sil who was formally arrested Thursday, November 3, on charges of fraud and abuse of power, and also stands accused of meddling in affairs of state.

But the president denied some of the more lurid reports concerning her relationship with Choi, who the media has portrayed as a Rasputin-like figure who wielded an unhealthy influence over Park and involved her in cultish religious activities and shamanist rituals.

The scandal has shattered public trust in Park’s presidency, which has more than a year left to run, triggering large street protests, calls for her resignation and a major reshuffle of her senior ministers and top advisers.

A formal investigation has focused on allegations that Choi, 60, leveraged her close relationship with Park to coerce local firms into donating large sums to dubious non-profit foundations that she then used for personal gain.

Park said she would not seek to hide behind presidential privilege if required to give testimony.

“If necessary, I am willing to sincerely respond to prosecutors’ investigations,” she said.

South Korea’s constitution does not allow a sitting president to be prosecuted, but some senior officials have suggested questioning as part of a wider investigation is permissible.

In an at-times emotional address, Park said she had been living a “lonely life” as president and had turned to Choi for company and help.

“Looking back, I allowed my guard to drop as she stood by my side during difficult times.

“I trusted my personal relationship, but was careless and not tough enough with my acquaintances,” she said, adding that the fallout from the scandal was “all my fault”.

Choi, whose late father was an elusive religious figure and an important mentor to Park, also faces allegations that she interfered with government affairs, including the nomination of senior officials.

And some reports have suggested that Choi was still involved in a shadowy religious group created by her father and that Park had fallen under its influence.

“There have been claims that I fell for a religious cult or had (shamanist rituals) performed in the Blue House, but I would like to clarify that those are absolutely not true,” Park said in her address on Friday.

“She does not seem to understand the gravity of the whole situation,” Choo said. “She is only interested in maintaining her grip on power.”

Opposition parties, while vocal in their criticism of Park’s behavior, have stopped short of calling for her resignation which would necessitate an early presidential election that they would not be confident of winning.

Analysts say Park is likely to limp on to the end of her term with her power severely undermined at a time of slowing economic growth, rising unemployment and elevated military tensions with North Korea. – Rappler.com