Facebook Twitter Copy URL
Copied
Trump doubles down on his attacks on Clinton as a product of a venal and incompetent establishment, while Clinton headlines an optimistic concert spectacular featuring superstar singer Beyonce

CLEVELAND, USA – Hillary Clinton and Donald Trump brandished starkly different visions of America as they headed into a fierce final weekend of campaigning, one celebrating hope as the other bashed corruption.

Trump doubled down on his attacks on Clinton as a product of a venal and incompetent establishment, while Clinton headlined an optimistic concert spectacular featuring superstar singer Beyonce.

Forecasts based on polling averages still give the 69-year-old Democrat an edge over the 70-year-old Republican property mogul ahead of Tuesday’s (November 8) vote.

But Trump has been buoyed by signs that he is closing the gap in the key swing states that will decide who secures an electoral college win.

So both headed Friday, November 4, to the American rustbelt, where blue-collar voters that were once reliable Democrats may be tempted by Trump’s protectionist promise to repatriate jobs from Mexico and China.

Clinton’s campaign brought her to Cleveland, Ohio, a state that fellow Democrat President Barack Obama won in 2012 but where she now trails Trump in opinion polls by around five percentage points.

She was introduced with a show-stopping set by rapper Jay-Z and his even more famous wife Beyonce, who sang songs of emancipation and empowerment wearing a version of Clinton’s trademark pantsuit.

“The world looks to us as a progressive country that needs change,” Beyonce declared. “I want my daughter to grow up to see a woman lead our country. That is why I’m with her”

Riffing on the theme, Clinton portrayed her campaign to become America’s first female president as the next step in the civil rights struggle.

“We have unfinished work to do, more barriers to break, and with your help, a glass ceiling to crack once and for all,” she declared, to loud cheers.

Earlier, Clinton had been in Detroit, Michigan, where supporters booed her populist rival when she attacked his affinity for Russian President Vladimir Putin and a “dark vision” of an America mired in poverty and failure.

“When I hear my opponent talking about America I don’t recognize it,” she declared, touting her own “confident, optimistic, inclusive” agenda.

The crowd laughed in delight when she mocked the New York billionaire, who avoided the Vietnam War draft, for wearing a camouflage baseball cap.

Trump has run one of the most aggressive and populist campaigns in history – browbeating his Republican primary rivals into submission before launching into Clinton, “such a nasty woman.”

Trump was in Hershey, Pennsylvania bidding to use his popularity with the white, male working class to smash a hole in the “firewall” pollsters once thought Clinton enjoyed in Democrat-leaning states. 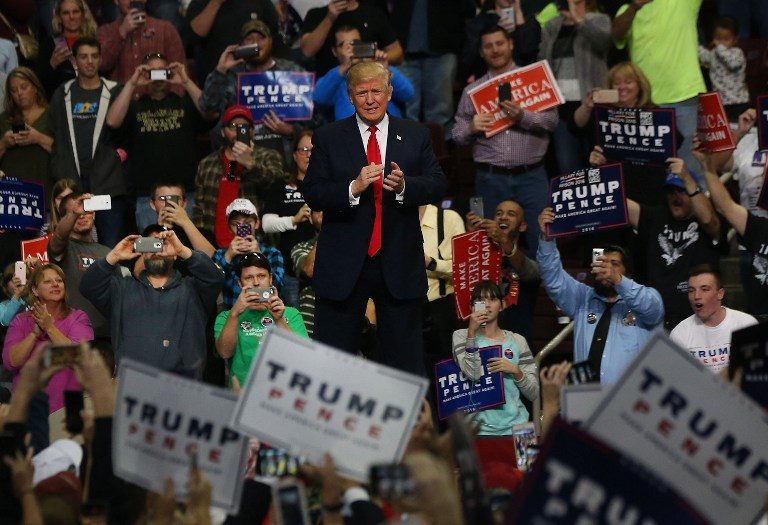 “I want the entire corrupt Washington establishment to hear the words we’re about to say. When we win on November 8 we’re going to ‘drain the swamp’,” he said, as the 13,000-strong crowd took up the chant.

He predicted that Clinton will face prosecution after an FBI inquiry into her inappropriate use of private email when she was secretary of state, and vowed to tear up current US free trade deals.

“We’re gonna win Pennsylvania big,” he said. “And by the way, I didn’t have to bring J-Lo or Jay-Z. I’m here all by myself,” he added, mocking in advance Hillary’s celebrity event.

‘As corrupt as they come’

A Pennsylvania polling average compiled by tracker RealClearPolitics gives Clinton a 2.6 percentage point edge in the state, but the huge crowd Trump drew was clearly in tune with his message.

“Hillary is about as corrupt as they come,” declared 27-year-old welder Logan Sechrist, who came to Hershey from Lebanon, Pennsylvania with his pregnant wife to hear Trump’s plan for jobs.

“I think honestly we need somebody who’s a businessman and not a politician,” Sechrist said. “The country’s falling apart. We’re ready for something different.”

Zach Rehl, a 31-year-old Marine veteran, said previous Republican candidates had failed to speak up for factory workers who have seen their jobs shipped abroad under global trade rules.

“This thing hits people at home,” he said, predicting that election night on Tuesday in Pennsylvania would be “pretty close.”

Some of Clinton’s supporters have a similar feeling – or in their case, a creeping dread.

Clinton’s supporters were getting tense. “It’s nerve-racking that Trump’s gotten this far,” said Rachel Zeolla, 27, who works in marketing, at an earlier rally in Pittsburgh.

For the first time some pollsters agree with them.

Pennsylvania, Michigan and perhaps Ohio were once seen as low hanging fruit for Clinton, guaranteeing her victory even if she doesn’t pick off a prize like Florida – but the race has tightened.

The prospect that the November 8 vote will be close or that a once unlikely Trump victory could presage instability and recession has rocked markets.

The S&P 500 stock index closed down for the ninth straight day Friday, and the leaders of America’s friends and foes alike are watching in amazement as the world’s most powerful nation turns on itself. – Rappler.com