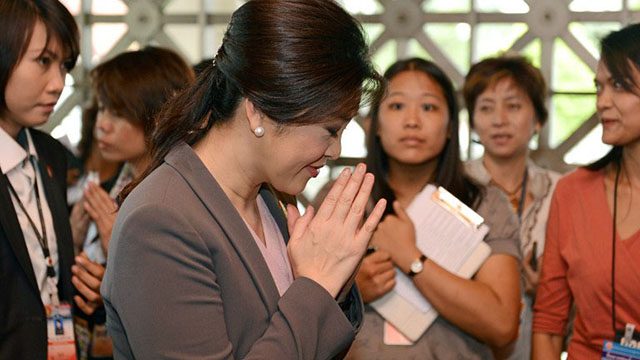 BANGKOK, Thailand – Ousted Thai PM Yingluck Shinawatra doled out sacks of rice to hundreds of star-struck shoppers on Saturday, November 5, in her latest move to outshine junta efforts to support farmers hit by a price plunge.

Tumbling rice prices have spread anguish across Thailand’s rural heartlands and sent the junta scrambling to roll out rescue packages and head off potential unrest.

Yingluck, whose government was toppled in the 2014 coup, has also seized the moment to rally behind rice farmers who make up the core support base of her family’s political dynasty.

In her latest gambit to connect with the party faithful without violating a junta ban on politics, Yingluck travelled to the rural northeast this week to buy several truckloads of rice from struggling farmers.

On Saturday, the ex-premier set up shop in a Bangkok parking lot to sell sacks of the staple grain to frenzied fans.

Hundreds of supporters lined up and squealed with delight as the 49-year-old began handing out bags of rice from the back of a pick-up truck, priced at 20 baht per kilo.

“I am here to buy rice from Yingluck, I’m doing it to help her because she helps us,” Umaporn Kaewthongkha, a 60-year-old motorcycle taxi driver, told AFP.

“She is good-hearted, beautiful and helps the poor when she can.”

Yingluck and her billionaire brother Thaksin, a fellow ex-premier ousted in a 2006 coup, are loved by large swathes of the rural and urban poor who see them as champions of the downtrodden.

But their critics tell a different story.

A Bangkok-based elite and their allies in the military have cast the Shinawatras as corrupt politicians who manipulate the poor with populist handouts.

Analysts say the ruling junta is bent on preventing a political comeback from the family and has significantly hemmed in their movement by arresting critics and banning dissent.

Yingluck is currently facing up to 10 years in prison and a $1 billion fine over her administration’s rice policy, which prosecutors say was soaked in graft and cost the state billions.

But while the junta has skewered Yingluck over her rice scheme, this week it approved at least $1.3 billion in similar loans and subsidies for farmers battered by the price fall.

Junta chief Prayut Chan-O-Cha says the rescue measures are a short-term solution and has warned against “politicising” the issue. – Rappler.com