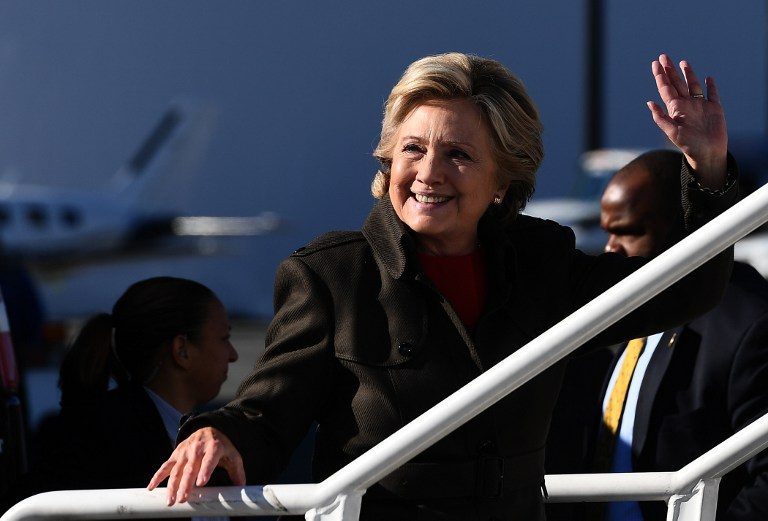 CLEVELAND, USA – The FBI on Sunday, November 6, lifted the threat that Hillary Clinton might face charges over her private email server – dropping a campaign bombshell 36 hours before her White House showdown with Donald Trump.

The Democrat’s camp welcomed the news that FBI Director James Comey had decided not to change his July recommendation that she not be prosecuted for putting US secrets at risk while serving as secretary of state.

But, as both candidates criss-crossed swing states in a last desperate scramble before Tuesday’s (November 8) election, the 11th-hour decision by the Federal Bureau of Investigation refocused attention on an issue that has dogged Clinton’s bid.

“We’re glad that this matter is resolved,” her campaign director Jennifer Palmieri told reporters aboard the 69-year-old’s plane.

Campaign manager Kellyanne Conway told Fox News that Comey’s letter “doesn’t change anything” and argued the FBI probe “was mishandled from the beginning.”

Late last month, with Clinton seemingly on a glide path to victory, Comey sent shockwaves through both campaigns by announcing a renewed FBI investigation in Clinton’s email use.

In July, the Justice Department, acting on the FBI’s recommendation, decided not to prosecute Clinton over her use of a private server for official emails while she was Washington’s top diplomat.

But, after a previously undiscovered batch of mails was found on a laptop belonging to the husband of one of Clinton’s key aides, Comey warned lawmakers he was revisiting the case.

Trump, the 70-year-old property tycoon and Republican flag-bearer, seized on the opening, condemning Clinton’s “criminal scheme” and arguing that she was unfit to be president.

Opinion polls tightened as Trump began to recover ground he lost after several women accused him of sexual assault, and the race looked headed for a photo finish.

But on Sunday, Comey wrote another letter to Congress to say that FBI agents had been working around the clock to review the “large volume of emails” found on the laptop.

“During that process, we reviewed all of the communications that were to or from Hillary Clinton while she was secretary of state,” Comey wrote.

“Based on our review, we have not changed our conclusions that we expressed in July with respect to Hillary Clinton,” he concluded.

“Comey must be under enormous political pressure to cave like this and announce something he can’t possibly know,” he declared.

Clinton made no direct reference to her reprieve in her first campaign stop – in Cleveland, Ohio – after the news broke.

Instead, she hammered her opponent over his sometimes ugly rhetoric and, implicitly, the alleged covert Russian interference that have poisoned the race.

“There are powerful forces inside and outside of America that do threaten to pull us apart,” she said.

“We’ve arrived at a moment of reckoning in this election. Our core values as Americans are being tested.”

It was not immediately clear how the news would affect what has been one of the most bruising campaigns in modern US history, one that has the world on tenterhooks.

But there was relief among Clinton aides as they planned a huge rally in Philadelphia on Monday, November 7, the night before Election Day, starring President Barack Obama, his wife Michelle and Bruce Springsteen.

Trump, who has hammered away at the email issue in stump speeches 3 to 4 times a day for the last few weeks of the campaign, had no immediate reaction to Comey’s decision.

But at a rally in Minnesota, a state won comfortably by Obama in 2012, he returned to his familiar theme of the corruption of the Washington elite.

“Hillary Clinton will be under investigation for a long, long time, for her many crimes against our nation, our people, our democracy,” he declared.

But he warned voters: “You have to understand, it’s a rigged system and she’s protected.”

Conway took up this theme in television interviews, insinuating that there is one set of rules for Clinton and another for “us, the little people.”

Last-minute campaign events – including a midnight rally Monday night by Clinton in North Carolina – have already been planned in the most contested states that will ultimately determine victory.

If Clinton wins, America’s first female president will seek to build on Obama’s cautious but progressive legacy, including his controversial health insurance reforms.

Trump, an unapologetic populist, has vowed to tear up the reform along with America’s free trade agreements, to rebuild a “depleted” military and review US alliances.

Clinton attended services at a majority-black church in Philadelphia, a traditionally liberal city where getting out the vote is crucial for Clinton to win Pennsylvania.

“Every hour and every minute counts,” Clinton told congregants at the Mount Airy Church of God in Christ. “We cannot get this wrong. The stakes are too high.”

Before joining her in Philadelphia on Monday night, the president campaigns in Michigan and small but pivotal New Hampshire, where Trump has edged ahead.

Obama was campaigning hard for his preferred successor in Kissimmee, Florida on Sunday, declaring: “If we win Florida, it’s a wrap. I love you, Florida. Let’s finish the job.”

Respected FiveThirtyEight.com election forecaster Nate Silver has Clinton as a two-to-one favorite against Trump, but said her lead appears “less solid” than Obama’s did in 2012. – Rappler.com