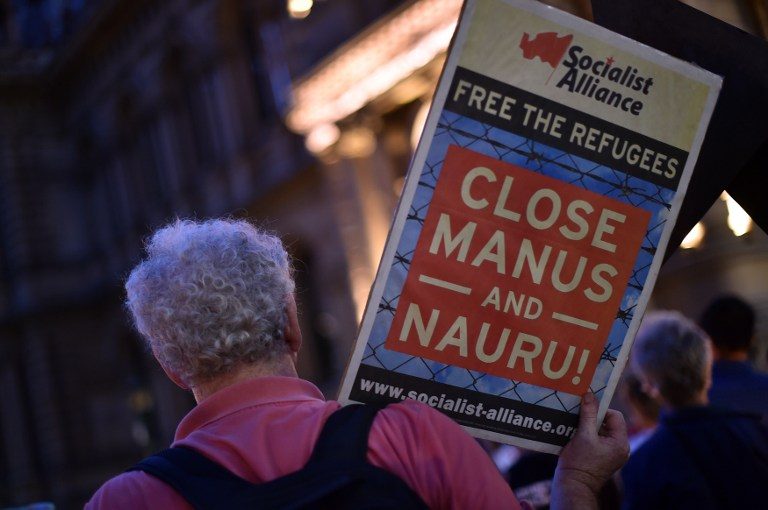 SYDNEY, Australia – Refugees held on remote Pacific camps after trying to reach Australia by boat will be resettled in the US in a “one-off” deal, the premier says, a breakthrough that could see the controversial facilities closed.

Canberra sends asylum-seekers who try to reach Australia by boat to detention facilities on Papua New Guinea’s Manus Island and Nauru. They are blocked from resettling in Australia even if found to be refugees.

“The arrangements with the United States will offer the opportunity for refugees, both on Nauru and Manus, to be resettled,” Prime Minister Malcolm Turnbull told reporters in Canberra.

“It is a one-off agreement. It will not be repeated… Our priority is the resettlement of women, children and families.”

Successive Australian governments have sought to stem waves of boat migration by people from war-torn Afghanistan, Sri Lanka and the Middle East, using harsh policies including turning back the vessels, and strict secrecy about operations on the high seas and at the remote camps.

Although the latest policies by the current conservative government largely stopped the arrivals, conditions in the camps have been widely criticized by refugee advocates and medical professionals.

They say some asylum-seekers suffer from mental health problems due to their prolonged, indefinite detention.

The UNHCR said the arrangement was a “much-needed, long-term solution” but warned that options should be found for everyone on Manus and Nauru.

“This announcement is full of holes. No timeframe. No numbers,” added Daniel Webb from the Human Rights Law Centre, which has challenged offshore detention in court.

“This ugly chapter in our history only closes when every single man, woman and child suffering at our government’s hand on Nauru and Manus is finally rebuilding their lives in safety. No one can be left behind.”

The arrangement followed Turnbull’s announcement in September that Australia would join a US-led program to resettle Central American refugees at a Costa Rica center.

Turnbull said officials from the US Department of Homeland Security would be arriving in Australia “in the next few days”.

But he could not say how many refugees would be offered US resettlement and if the agreement would continue under the incoming Donald Trump administration.

President-elect Trump said on the campaign trail that he would tighten immigration, particularly for Muslims.

US Secretary of State John Kerry, who is in New Zealand, confirmed the deal, adding that “we in the United States have agreed to consider referrals from (UN refugee body) UNHCR on refugees now residing in Nauru and in Papua New Guinea”.

Refugees who are offered the US move but reject it would be offered a 20-year Nauru visa, while any future boat arrivals will not be eligible for the deal.

Dutton stressed the deal was not an incentive for people-smugglers to send more asylum-seekers by boat, with Canberra set to ramp up its marine border patrols to turn back vessels.

A resettlement agreement with Phnom Penh struck in 2014 was criticized after only several refugees made the move.

Refugees can also resettle in PNG, although only about two dozen have taken up that option, Port Moresby said last month. Others reportedly cited safety fears in not wanting to settle in the Pacific country.

Australia agreed in August close the Manus camp following a PNG Supreme Court ruling in April declaring that holding people there was unconstitutional and illegal.

Dutton said Sunday that Nauru “will remain in its current status forever” without elaborating further. Fairfax Media reported Saturday that Canberra wanted to close both centers by 2019.

Some 675 asylum-seekers on Manus and 941 on Nauru out of more than 2,000 applications have been successful in obtaining initial or final refugee status, the immigration department said earlier this month.

Canberra has long defended its policy of denying asylum-seekers resettlement in Australia, saying it has prevented deaths at sea. – Rappler.com