Nov 14, 2016 7:18 PM PHT
Agence France-Presse
Facebook Twitter Copy URL
Copied
With 99.9% of ballots counted, Socialist Party chief Dodon has 52.3% of the votes, according to the electoral commission, with pro-European rival Maia Sandu at 47.7% 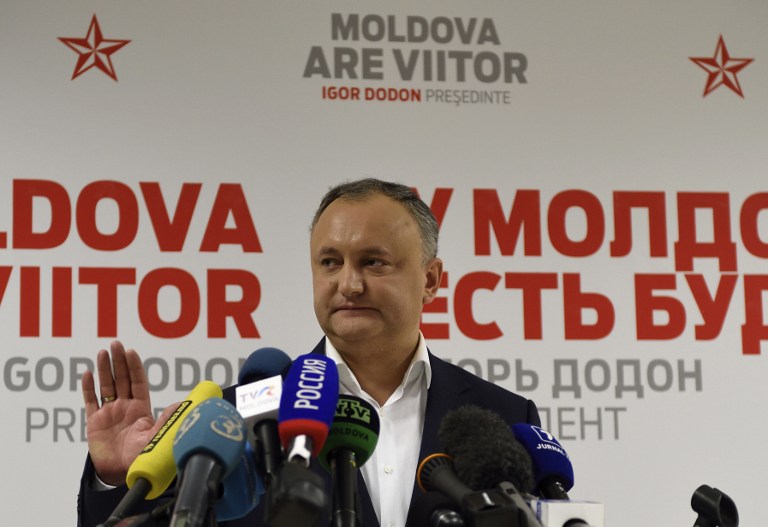 With 99.9% of ballots counted, Socialist Party chief Dodon had 52.3% of the votes, according to the electoral commission, with pro-European rival Maia Sandu on 47.7%.

“We have won, everyone knows it,” Dodon told a press conference overnight.

The full results are expected to be announced later this week.

The vote marks the first time in 20 years that Moldova – wracked by corruption scandals in recent years – is electing its leader by national vote instead of having parliament select the head of state.

Wedged between Ukraine and Romania, the tiny nation of 3.5 million people is caught in a political tug-of-war between Russia and the West.

Dodon had come out top in the first round of voting on October 30 with 48% ahead of Sandu, a center-right former education minister who worked for the World Bank, with 38%.

They have diametrically opposed visions for Moldova’s future.

Dodon – who served as economy minister under a communist government between 2006 and 2009 – has called for deeper ties and boosting trade with Moscow.

Sandu meanwhile had urged a path towards Europe, calling for the withdrawal of thousands of Russian troops from the Russian-speaking separatist region of Transdniester, which broke away in the early 1990s after a brief civil war.

Moldova signed an historic EU association agreement in 2014, and half of its exports now go to the bloc.

The move was bitterly opposed by Russia, which responded with an embargo targeting Moldova’s crucial agriculture sector.

“Close ties united us with Moldova before but then the scope of our relations slid,” Peskov told journalists Monday.

“But Russia has always been and remains committed to maintaining ties with Moldova.”

Both candidates criticised the vote as badly organised, highlighting the shortage of ballot papers for overseas voters. More than 4,000 Moldovan and international observers were on hand to monitor the vote.

The vote comes as a Moscow-friendly general also claimed victory in ex-communist Bulgaria’s presidential election Sunday, prompting Prime Minister Boyko Borisov to announce his resignation as his nominee was dealt a crushing defeat.

Speaking at a polling station on Sunday, Dodon had described his campaign as “against the oligarchs, against those who have robbed our country and want to destroy it”.

Moldova has been rocked by corruption scandals and political turmoil in recent years.

In 2014, $1 billion (920 million euros) mysteriously disappeared from three banks, prompting huge street protests and the arrest of the former prime minister Vlad Filat, who has since been convicted of corruption and abuse of office.

A recent report published by Transparency International called the country “the regional launderer for money of dubious origin”.

Moldova’s current Prime Minister Pavel Filip, who has served since January, is pro-European and introduced political changes including the direct presidential vote.

Moldova is considered by some international organisations to be Europe’s poorest country.

Forty-one percent of the population live on less than $5 (4.6 euros) a day while the average monthly salary is $240, according to World Bank figures. – Rappler.com