Nov 15, 2016 8:11 AM PHT
Agence France-Presse
Facebook Twitter Copy URL
Copied
(UPDATED) 'Regardless of what experience or assumptions he brought to the office, this office has a way of waking you up' 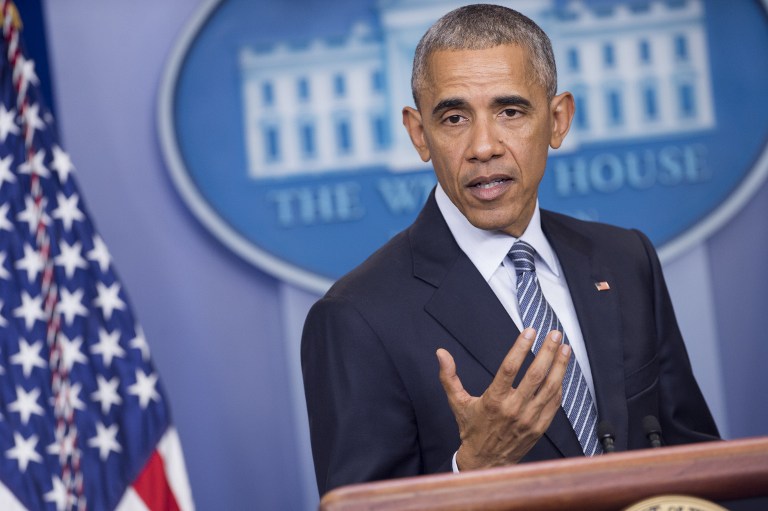 The outgoing Democratic leader made his comments at a wide-ranging news conference before he embarks on a farewell visit to Europe to reassure worried allies about a man he once warned was “unfit” to lead the United States.

Trump’s election win last week over Hillary Clinton has been met with euphoria among his supporters, but also with a wave of protests across the nation that are unusual for the world’s leading democracy.

The 70-year-old Republican billionaire – who takes office in just 9 weeks – was holed up in his home office in Manhattan with his inner circle, working to shape his new administration.

While admitting that he had “concerns” about his successor, the message Obama delivered on Monday was designed to comfort those still ill at ease with Trump – and a lesson for the billionaire populist in the art of the presidency.

Trump, a 70-year-old real estate developer and reality TV star who had never run for political office, has threatened to shake up America’s most important international relationships.

But Obama said that deporting millions of immigrants, tearing up mutual defense treaties with NATO and Japan, and unraveling global deals on Iran’s nuclear program and the environment were not as simple as delivering tub-thumping rhetoric.

“Regardless of what experience or assumptions he brought to the office, this office has a way of waking you up,” Obama said.

“Reality has a way of asserting itself,” he added, offering his view that Trump is pragmatic rather than ideological.

Obama said that during a meeting with Trump at the White House last week, he had told the president-elect that his actions can move markets, tanks and public sentiment.

“I emphasized to him that, look, in an election like this that was so hotly contested and so divided, gestures matter,” Obama said.

“It’s really important to try to send some signals of unity, and to reach out to minority groups or women or others that were concerned about the tenor of the campaign.”

“Do I have concerns? Absolutely. Of course, I have concerns. He and I differ on a whole bunch of issues. But the federal government and our democracy is not a speedboat – it’s an ocean liner.”

Amid dire predictions about the end of the republic and the global order, Obama said that Trump’s inexperience in politics and lack of intellectual baggage could be an asset.

“I don’t think he is ideological. I think ultimately he is pragmatic in that way,” he told reporters at his first news conference since the Republican mogul defeated his Democratic rival Clinton in last week’s presidential election.

“And that can serve him well as long as he’s got good people around him and he has a clear sense of direction,” he continued.

The appointment of Bannon – the head of ultra-conservative Breitbart News who has championed the so-called “alt-right” perspective – has raised hackles, with Jewish and Muslim leaders expressing concerns.

Asked about Trump’s choice of Bannon, Obama gave a pass. “It would not be appropriate for me to comment on every appointment that the president-elect starts making if I want to be consistent with the notion that we’re going to try to facilitate a smooth transition,” he said.

The New York mogul has also spent time calling world leaders as he begins to develop ties with America’s allies – and adversaries.

“Getting his arms around foreign policy” is one of Trump’s four top priorities, along with health care, immigration and taxes, as he prepares for his first 100 days as president, Priebus said.

“I see President-elect Trump being very calm and cool and collected. And prepared to lead the American people,” Priebus – seen as an establishment counter-weight to Bannon – told ABC’s “Good Morning America.”

Obama said that Trump had already conveyed a “commitment to NATO” that seemed to run against his campaign promises.

“In my conversation with the president-elect, he expressed a great interest in maintaining our core strategic relationships,” Obama said.

During a visit this week to Europe, and then Peru for a summit with Asia-Pacific leaders, Obama said he would be able to tell allies “there is no weakening of resolve when it comes to America’s commitment to maintaining a strong and robust NATO relationship.”

“This is a time of great change in the world, but America’s always been a pillar of strength and a beacon of hope to peoples around the globe. And that’s what it must continue to be,” he said.

Obama tried to steer clear of giving Democrats advice on how to recover from the brutal loss of the White House and the party’s failure to take back both houses of Congress.

“I think it’s important for me not to be big-footing,” he said. “I think we want to see new voices and new ideas emerge.” – Rappler.com