Rise in racist incidents in U.S. points to Trump-emboldened backlash 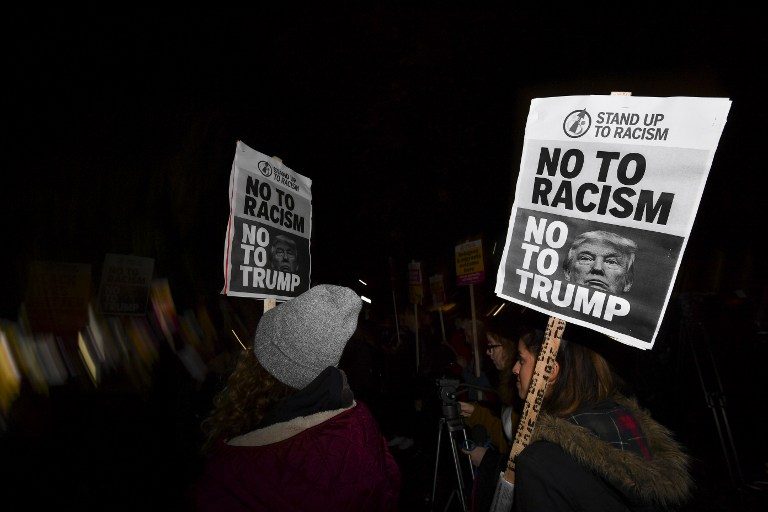 WASHINGTON DC, USA – A surge in reports of racist incidents has minorities and civil rights groups worried that Donald Trump’s election as US president has emboldened hate groups.

Swastikas and Nazi slogans scrawled on a Philadelphia storefront, xenophobic chants at a New York high school, threatening letters in the mail, insults on college campuses: reports like these have proliferated since November 8.

“I have a scarf on. Passed by someone on the platform today and he says, ‘Your time’s up, girlie,'” journalist Mehreen Kasana wrote on her Twitter account.

Hispanics – the target of Trump’s most incendiary anti-immigrant rhetoric during the campaign – appear particularly vulnerable, as the Southern Poverty Law Center (SPLC) noted in tracking the rise of harassment of minorities.

Asked about the outbreaks of anti-Muslim, anti-Hispanic bullying, Trump said in a CBS interview aired Sunday that he was “saddened to hear that,” adding it was “a very small amount.”

“If it helps, I will say this and I’ll say it right to the cameras. Stop it,” he said.

“‘Build a wall’ was chanted in our cafeteria Wed at lunch. ‘If you aren’t born here, pack your bags’ was shouted in my own classroom. ‘Get out spic’ was said in our halls,” a teacher in Washington state told the SPLC, a non-profit that monitors the activities of hate groups in the United States.

SPLC collected reports of more than 200 similar incidents between Election Day on November 8 and Friday, November 11, against African Americans, women, and members of the LGBT community.

“It doesn’t compare to the civil rights movement. No one is blowing up churches,” SPLC president Richard Cohen told the New York Times. “But I don’t think there’s any question that there’s been an increase.”

Anti-Muslim attacks increased by 67% in 2015, the Federal Bureau of Investigation said in a report released on Monday.

Educational institutions around the country, some with liberal reputations, have reported disturbing incidents in recent days and have sent out emails assuring their communities they are taking action to counter them.

Some incidents have involved graffiti on bathroom walls, including a modified version of Trump’s campaign slogan: “Make America White Again.”

The insults have included some of the worst slurs against blacks and Latinos as well as words of contempt for homosexuals. “Seig Heil” and Nazi swastikas appeared spray-painted on a storefront in south Philadelphia a day after the election.

“Acts of violence in our beautifully diverse city will not be tolerated,” the New York mayor’s office said on its Twitter account.

Some incidents have involved more than verbal violence.

A Muslim student at San Jose State University in California reported that a white man tried to rip off her veil, nearly choking her.

Another student at the University of Michigan in Ann Arbor told of being accosted by a man who threatened to set her on fire with a lighter unless she took off her Muslim headdress.

In the city of Missoula, Montana, tracts from the American Nazi Party accusing Jews of controlling the media were distributed in residential neighborhoods. The local synagogue asked the police to increase security.

Despite the tense climate, Trump picked extreme-right firebrand Steve Bannon, a darling of white supremacists, to be his chief strategist.

Choosing him for a top White House post “only further emboldens the extreme fringes during this very tense time,” warned Oren Segal, head of the Anti-Defamation League.

President Barack Obama voiced hope, however, that Trump might soon be tempered.

“I don’t think he is ideological. I think ultimately he is pragmatic in that way,” Obama told reporters at his first news conference since the Republican mogul defeated his Democratic rival Clinton in last week’s presidential election.

“And that can serve him well as long as he’s got good people around him and he has a clear sense of direction,” he added.

“In an election like this that was so hotly contested and so divided, gestures matter,” Obama said. – Rappler.com