Obama in Europe to reassure allies

Nov 15, 2016 6:10 PM PHT
Agence France-Presse
Facebook Twitter Copy URL
Copied
With Europeans worried by Trump's downplaying of the importance of the NATO alliance, Obama says Washington had to resist the 'urge' of isolationism 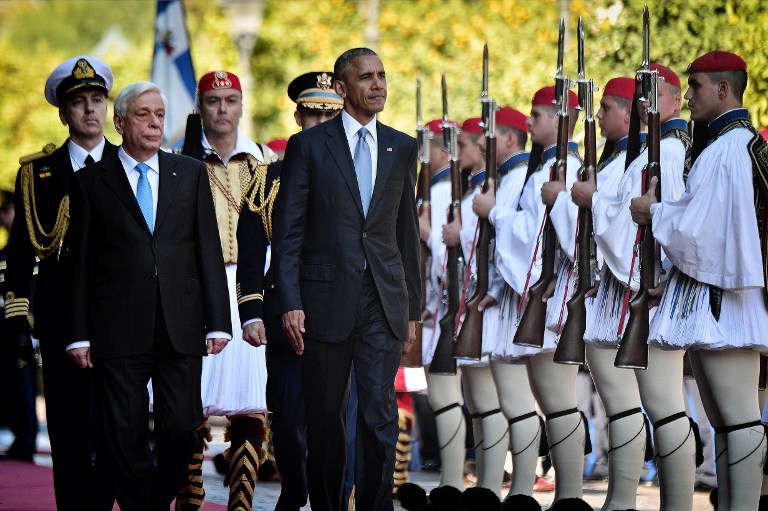 With Europeans worried by Trump’s downplaying of the importance of the NATO alliance, Obama pointedly told Greek daily Kathimerini before his visit that Washington had to resist the “urge” of isolationism.

“Our best chance for progress is to resist the urge to turn inward and instead reinvigorate our shared values and work together,” Obama said.

Speaking to reporters on the eve of the trip, Obama cautioned his brash successor Trump that he faces a reality check if he tries to enact some of his more controversial campaign promises.

“This office has a way of waking you up,” said the outgoing president.

The fourth president to travel to Greece, Obama will visit the Acropolis before delivering a much-awaited speech on the challenges of globalization.

Security was tight in central Athens, with thousands of police officers on the streets and traffic to be affected for several hours.

On Wednesday, Obama travels to Germany, where he will speak to the French and British leaders, in addition to close ally Chancellor Angela Merkel.

Obama concludes his trip with a stop in Peru for a summit of the Asia-Pacific Economic Cooperation forum (APEC) where he is expected to meet President Xi Jinping of China.

Athenians on Tuesday had mixed feelings about the president’s visit, which has precipitated a major security clampdown.

“We live in the hope that it will bring something positive for Greece and the region,” said Spyros, a 30-year-old civil servant.

Ekaterini Tsarmoutzi, a private employee, said Obama “was nice as a person, but above all he is an American.”

Many Greeks are suspicious of the United States after they helped install a repressive dictatorship in the country in the late sixties.

Greek trade unions, leftist and anarchist parties have called for protests in Athens on Tuesday to denounce “imperialist” US involvement in wars in the Middle East.

In turn, police have banned protests in areas of the capital where Obama will hold his meetings.

The boosted police measures also come after assailants threw a grenade at the French embassy in Athens last week, slightly wounding an officer on duty.

Christina Artinou, a concierge, wondered about the possible benefits of having an outgoing president visit.

“As he’s on the way out, he’s unlikely to be of much help now. Why did he not come sooner?” she said.

Meanwhile, Greek leaders are anxious for a new US pledge to help alleviate the country’s enormous public debt, a measure actively sought by the International Monetary Fund but opposed by leading European lender Germany.

Greek government spokesman Dimitris Tzanakopoulos on Tuesday said Obama’s visit would “contribute to promoting a fair and viable solution on the Greek debt.”

Obama is also expected to address Europe’s challenge in accommodating hundreds of thousands of refugees who have arrived on the continent fleeing conflict in the Middle East. – Rappler.com