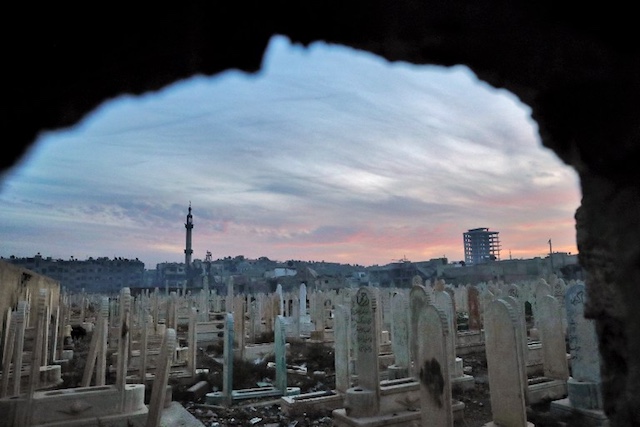 The operation was the first of its kind since Donald Trump won the US presidential election last week.

Moscow said it had begun a “major operation” which saw the first missions carried out by warplanes taking off from the Admiral Kuznetsov aircraft carrier that arrived off Syria last week.

The Britain-based Syrian Observatory for Human Rights said at least five civilians were killed in the bombardment, the first of its kind since October 18.

An Agence France-Presse correspondent in east Aleppo said strikes hit the Sakhur, Fardos and Masakan Hanano neighborhoods while ambulances sped through the streets to evacuate the wounded.

The bombardment ended a period of relative respite for more than 250,000 people living in besieged eastern Aleppo.

On October 18, Moscow said it was halting its air strikes ahead of a short-lived truce and Syrian strikes on the rebel east also subsided, with bombardment mostly confined to areas where clashes were taking place on the edges of the city.

The respite came after international criticism of a ferocious assault launched by Syrian and Russian forces on September 22 in a bid to recapture eastern Aleppo city.

Civilians were among hundreds of people killed in the bombing campaign, which also destroyed infrastructure.

Moscow has organized several brief truces to encourage residents and surrendering rebels to leave east Aleppo, but few have gone.

No aid has entered eastern Aleppo since it was first surrounded by government troops in mid-July, and the UN warned Thursday it was distributing its last remaining food rations in the rebel districts.

The UN’s food agency, FAO, said on Tuesday that a farming crisis across war-torn Syria has reduced food production to a record low and raised fear that people will be forced to flee famine.

“After the end of this period, the planned strategic offensive will begin,” the message said.

Once Syria’s economic powerhouse, Aleppo has been ravaged by the war that has killed more than 300,000 people across the country since it started in March 2011 with anti-government protests.

Yasser Yusef, a member of the political office of the Nureddine al-Zinki rebel group, expressed fears that the bombardment would lead to “massacres and crimes against humanity in northern Syria and particularly in Aleppo city and Idlib.”

“Russia and the regime are trying to foil the efforts of the United Nations and the international community to reduce violence and protect civilians and deliver aid to civilians in all the besieged areas,” he said.

As the strikes hit Aleppo, Moscow announced its Admiral Kuznetsov aircraft carrier was now being used it its campaign to bolster President Bashar al-Assad’s government.

“Today from this carrier, our Sukhoi-33 (bombers) began their operations.”

Russia has been carrying out a bombing campaign in Syria for the past year and deployed a naval contingent to back up its operation.

The Admiral Kuznetsov, Russia’s sole aircraft carrier, arrived in the eastern Mediterranean off the Syrian coast as part of a flotilla of ships sent to reinforce Russia’s military in the area.

Shoigu said the “major operation” began at 0730 GMT Tuesday aiming to inflict heavy damage on “the Islamic State group and the Al-Nusra Front’s positions in Idlib and Homs provinces.”

Al-Nusra Front is the old name of Al-Qaeda’s former Syrian affiliate. It is now known as Fateh al-Sham Front.

Idlib is largely controlled by a powerful rebel alliance that includes Fateh al-Sham.

The assault is the first major military development since the election of Trump, who has suggested working more closely with Russia in Syria. – Rappler.com