No end in sight to migrant carnage in Mediterranean

Nov 17, 2016 8:13 AM PHT
Agence France-Presse
Facebook Twitter Copy URL
Copied
Departures from Libya are continuing unabated despite worsening weather in the Mediterranean, with over 3,200 people rescued from crowded and unseaworthy dinghies since November 12 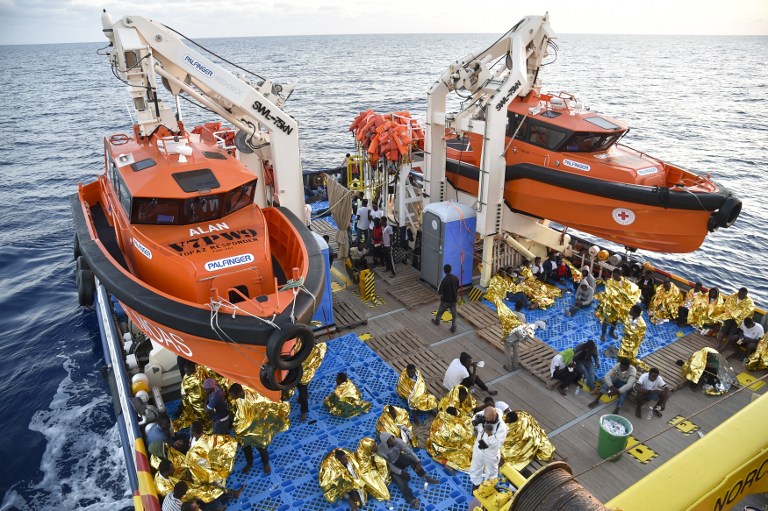 ROME, Italy – More than 240 people have died in migrant boat sinkings in the Mediterranean this week, officials said Wednesday, November 16, as horrifying new testimony emerged from survivors of another tragedy.

Departures from Libya are continuing unabated despite worsening weather in the Mediterranean, with over 3,200 people rescued from crowded and unseaworthy dinghies since Saturday, November 12. The total is the same as for the whole month of November 2015.

The new death toll was based on information gathered by the UN’s refugee agency (UNHCR) from 15 survivors, who said some 135 people had drowned or lost when a dinghy sank on Monday, November 14.

Some 95 others are presumed dead after another dinghy sank on Tuesday, November 15.

Nine bodies have been recovered in total after both incidents, while a 10th person was seen to have drowned but could not be pulled from the sea by rescue teams.

Italy’s coastguard said 580 people had been brought to safety Wednesday in 5 separate rescue operations, with one body recovered.

The deaths were not limited to the perilous crossing between Libya and Italy. On Wednesday the bodies of 4 male migrants, aged between 20 and 40, were found in a boat that ran into trouble off Greece.

The Greek coastguard said it had spotted the boat some 15 nautical miles off the island of Thassos “with a total of 19 people on board, 4 of whom had lost consciousness”, probably due to hypothermia.

The survivors of Monday’s shipwreck off Libya – overwhelmingly from sub-Saharan Africa – arrived Wednesday in the port of Catania in Sicily, where they spoke of their ordeal.

They had set off from Libya on Sunday night with about 150 people on board, “so there would be about 135 missing,” UNHCR spokesman Iosta Ibba told Agence France-Presse.

“Their dinghy, which was already in a poor state, began taking on water several hours after they set off. It then overturned, tipping all 150 into the sea. Only 15 managed to survive by clinging to a part of the vessel which floated,” he said.

“They stayed like that several hours before help arrived,” he added.

The latest deaths lift the total number of migrants who have died trying to cross the Mediterranean this year to just over 4,500, according to a UNHCR count based on bodies recovered and survivor accounts.

The Malta-based charity MOAS, which deploys two rescue boats in the area, said the true toll is higher “as it is highly likely that many boats sink without ever being reported”.

The charity blamed “the changing approach of smuggling networks” which it said showed “an attempt to maximize opportunity and meet demand on the part of the smugglers”.

“Whereas in past years, crossings were organized in more manageable trickles, perhaps a few a day, this year our crews have seen departures organized in large waves,” it said in a statement.

“Despite tireless efforts to save lives by both civil society and European navies… search-and-rescue efforts in the Mediterranean are more challenging than ever,” it added.

Over 167,000 people have been brought to safety in Italy since the start of the year, according to the interior ministry.