Nov 17, 2016 11:34 AM PHT
Agence France-Presse
Facebook Twitter Copy URL
Copied
The ship's arrival was the culmination of a mass evacuation operation that swung into action after huge landslides cut road and rail access to Kaikoura 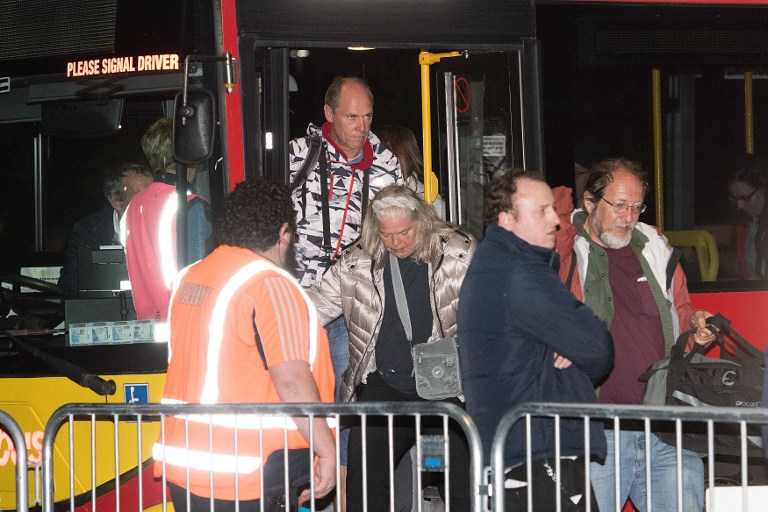 CHRISTCHURCH, New Zealand – There were tears and hugs in New Zealand Thursday, November 17, as “shellshocked” tourists who were stranded for days by a massive 7.8 earthquake finally disembarked safely from a  warship.

The HMNZS Canterbury docked just outside Christchurch carrying about 450 tourists, who gingerly made their way down the ship’s gangplanks in the darkness clutching suitcases and backpacks.

They were the last of about 1,000 travelers trapped in the disaster zone when Monday’s (November 14) tremor devastated parts of the South Island coast and killed two people.

“They’re a little bit shell shocked over the last few days,” the ship’s commander Simon Rooke told Radio NZ as it steamed away from the seaside town of Kaikoura, which bore the brunt of the tremor.

“Now they’re in a safe environment I think they’re making the most of it for the first time in over 24 hours, being able to relax, even if only a little bit.

“Some people are quite quiet, others are quite bubbly and want to tell us all sorts of things… I’ve had a couple of tears and couple of cuddles and thanks.”

The ship’s arrival was the culmination of a mass evacuation operation that swung into action after huge landslides cut road and rail access to Kaikoura.

The rest of the tourists, mostly international backpackers attracted by the region’s renowned whale watching, were choppered out on Tuesday and Wednesday (November 15 and 16).

More warships from the United States, Canada and Australia have arrived at Kaikoura to provide emergency supplies and logistical support.

The tremor, the second most powerful ever recorded in New Zealand, caused major infrastructure damage when it hit just after midnight Monday.

It tore apart roads and buckled rail tracks, as well as triggering an estimated 100,000 landslides that will take months to remove.

With the South Island’s main highway blocked by mountains of rocky debris in several places, Transport Minister Simon Bridges said the repair bill was likely to run into billions of dollars.

The quake has thrust up the seabed by meters in some places, meaning the whale watching boats that once lucratively plied Kaikoura Harbour may no longer be able to dock there.

The ocean floor has altered to such an extent that the impact on marine life is unclear, casting a shadow over the local fishing industry.

“It is clear that if we don’t move quickly, much of the employment in the area will dry up,” Economic Development Minister Steven Joyce said.

More than 2,000 aftershocks, some measuring over 6.0, are complicating the clean-up.

The tremor was felt across the country, causing violent shaking in Wellington about 250 kilometers (155 miles) away.

The capital was initially thought to have escaped serious damage but subsequent inspections have raised concerns about some 60 downtown buildings, which have been sealed off.

At least one has been rated an imminent threat of collapse and will be carefully demolished, while another was a new government office block that was supposed to be quake-proof.

Engineers were carrying out painstaking inspections, mindful of building failures during a 6.3 earthquake in Christchurch 5 years ago that killed 185 people.

New Zealand is on the boundary of the Australian and Pacific tectonic plates, which form part of the so-called “Ring of Fire”, and experiences up to 15,000 tremors a year. – Rappler.com