Nov 17, 2016 11:57 AM PHT
Agence France-Presse
Facebook Twitter Copy URL
Copied
In the French election, mainstream candidates all style themselves as uniquely qualified to prevent a similar upset by the far right 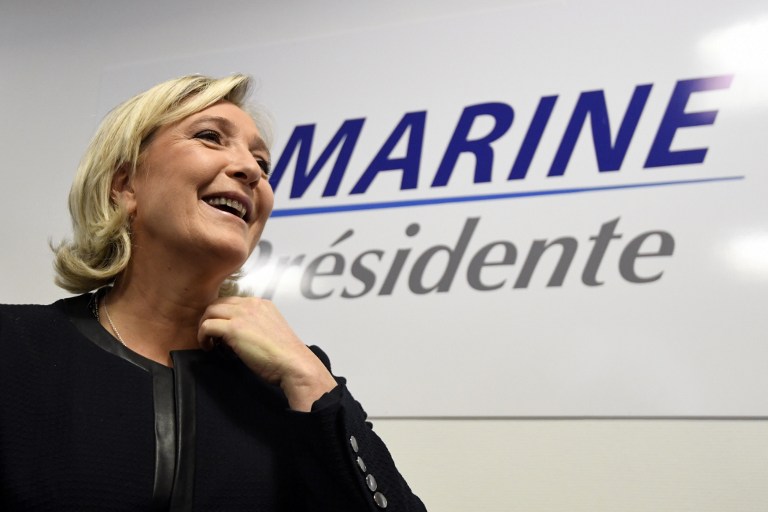 PARIS, France – Donald Trump’s election looms large over the race for president of America’s oldest ally France, where mainstream candidates all style themselves as uniquely qualified to prevent a similar upset by the far right.

On Thursday evening, November 17, right-wing candidates will take part in the last of three debates ahead of the first round on Sunday (November 20) of a primary to pick their nominee, who is in turn expected to win the Elyseé Palace.

Trump’s accession to the White House – and what it might mean for National Front (FN) leader Marine Le Pen’s chances – is expected to feature prominently in their exchanges.

The winner of the primary is tipped to go head-to-head for the presidency with Le Pen, who is polling at around 25-28% on the kind of nationalist, anti-immigration message that won over millions of US voters and convinced Britons to vote to exit the European Union.

While the polls show Le Pen being defeated by the right-wing candidate in the second round of the election in May, she has gleefully brandished Trump’s shock victory as proof that “nothing is set in stone”.

Both former president Nicolas Sarkozy and ex-prime minister Alain Juppe claim to be the best placed to keep Le Pen out of power, in Sarkozy’s case by borrowing some of the FN’s ideas on immigration and Islam, in Juppe’s by trying to unite the French against her.

Sarkozy, who is trailing Juppe in the primary, has pledged to curb immigration and intern suspected Islamist radicals following a wave of jihadist attacks.

Like Le Pen, Sarkozy saw the US result as a sign, seizing on Trump’s victory as proof of a “rejection of group-think”.

“How many Brexits, how many American elections, how many lost European referendums do you need to finally hear the anger of the people?” asked France’s 2007-12 president, who has attempted to reinvent himself as an anti-establishment candidate.

With Trump in the White House and Vladimir Putin in the Kremlin, a tough leader will be needed to defend French interests, he argued further.

“There will be no room for impotence, weakness and renunciation,” he said, in a swipe at 71-year-old Juppe, whom he accuses of being “soft”.

Frederic Dabi of Ifop pollsters said he was “very hesitant about the possible influence of Trump’s election on voting behaviour” in France.

Rather than turning the French race on its head, he said it had “reinforced existing strategies”.

Juppe, who has started to slide in polls, has rejected comparisons between himself and Trump’s ill-starred Democratic rival.

The man with the longest CV in French politics has cast himself as a bulwark against both Le Pen, whose party topped the vote in last year’s regional elections, and Sarkozy.

“Dividing for the sake of it is a dangerous game,” he told supporters at a rally in Paris on Monday.

Warming up for Juppe on Monday, November 14, the leader of the allied centrist UDI party cast Sarkozy as the Gallic Trump.

“We don’t want someone who flirts every day with the themes of the far right,” Jean-Christophe Lagarde declared. “France does not need a mini-Trump in the Elyseé.”

The left meanwhile is staring at a possible replay of France’s last political earthquake – when FN founder Jean-Marie Le Pen defeated the Socialist candidate for a place in the 2002 presidential run-off that was won by Jacques Chirac.

Fourteen years later, the left is again in tatters after a string of desertions from the side of the spectacularly unpopular President Francois Hollande.

On Wednesday, November 16, Hollande’s former star economy minister Emmanuel Macron became the latest to repudiate his mentor, announcing a bid to become president even though Hollande himself has yet to say whether he will seek a second term.

Deploring the “democratic crisis in Western societies”, the 38-year-old ex-banker said he would be the candidate of “hope”.

Faced with terrorism, global warming and growing inequality, “we cannot respond with the same men and the same ideas,” he insisted.

“I don’t think France is ready to elect someone without experience,” he said. – Rappler.com