Nov 17, 2016 9:54 PM PHT
Agence France-Presse
Facebook Twitter Copy URL
Copied
South Korean President Park Geun-Hye will not be ready to appear before prosecutors until next week despite their demand to question her sooner over a snowballing political scandal 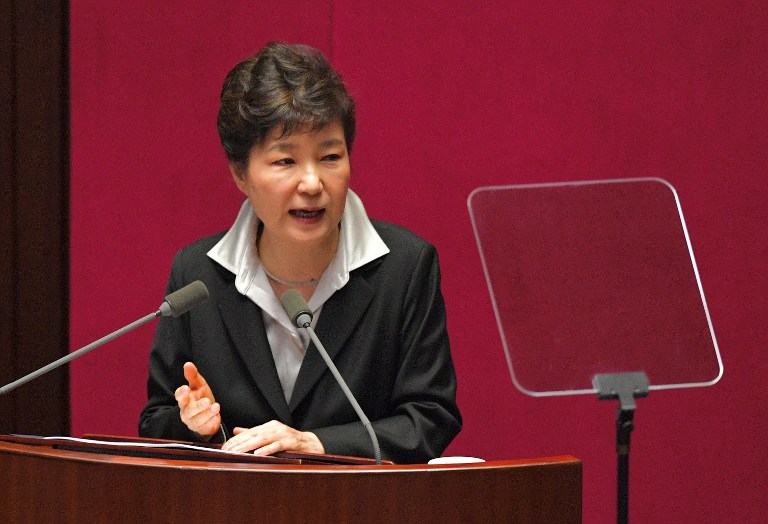 SEOUL, South Korea – South Korean President Park Geun-Hye will not be ready to appear before prosecutors until next week despite their demand to question her sooner over a snowballing political scandal, her lawyer said Thursday, November 17.

Park, who would be the first sitting president to be interrogated in a criminal case, has seen her approval ratings plunge in recent weeks, with hundreds of thousands of protesters taking to Seoul’s streets on Saturday, November 12, demanding her resignation.

The scandal centers on Park’s shadowy confidant Choi Soon-Sil, who is accused of using her ties with the president to coerce local firms to donate millions of dollars to non-profit foundations that Choi then used for personal gain.

Prosecutors have said they need to question Park by Friday, November 18 at the latest as part of their investigation into Choi.

Choi, 60, is also accused of interfering in state affairs to the extent of nominating officials and editing Park’s speeches even though she has no official title or security clearance.

Park’s lawyer Yoo Young-Ha said the president was willing to “cooperate” in the investigation but said she needed more time.

“I will rush through my preparations and cooperate so that an investigation into the president can be conducted next week,” Yoo said in a text message sent to reporters.

Under South Korea’s constitution, the incumbent president may not be charged with a criminal offence except insurrection or treason.

But many have argued the sitting president can be investigated by prosecutors and then charged after leaving office.

Choi, whose father was an elusive religious figure and a long-time mentor to Park until his death in 1994, was arrested earlier this month for abuse of power and fraud. Two presidential aides have also been arrested.

Prosecutors on Thursday requested a local court to issue an arrest warrant for a former vice sports minister in connection with the case, Yonhap said.

Prosecutors are also investigating whether Kim played a role in a recent decision by his ministry to provide a cash subsidy to a winter sports foundation run by Choi’s niece, who is widely seen as her key aide.

Lawmakers on Thursday passed a bill to set up a special independent counsel to probe the widening scandal after opposition parties said they were dissatisfied with the existing investigation.

Under the agreement, opposition parties will recommend a special prosecutor to lead the counsel, which will consist of more than 60 prosecutors and investigators.

The team will be given 120 days to look into allegations against Choi and the presidential aides mired in the scandal. – Rappler.com