Obama to pass torch to Merkel on farewell visit 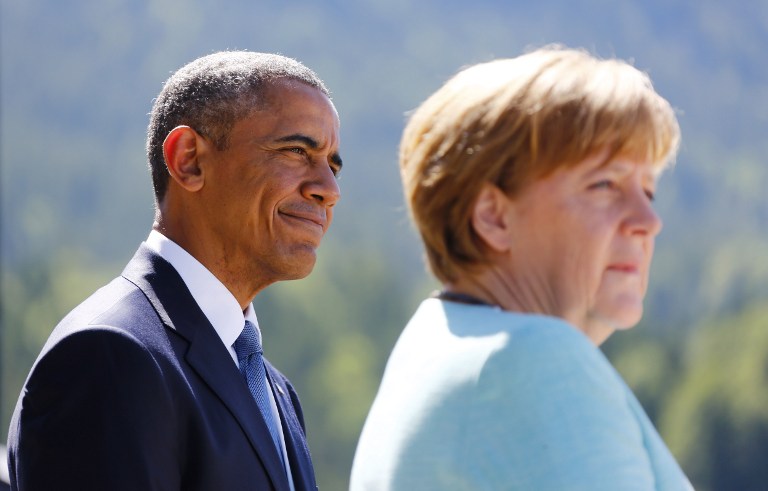 BERLIN, Germany – US President Barack Obama paid a farewell visit on Thursday, November 17 to German Chancellor Angela Merkel, seen by some as the new standard bearer of liberal democracy since the election of Donald Trump.

On the last leg of his final European tour as president, Obama aimed to ease fears about the future of the transatlantic partnership and thank Merkel for her friendship during his two terms, White House officials said.

In a joint article to coincide with his arrival in Germany, Obama and Merkel appealed for ongoing cooperation on the basis of shared principles to fight climate change, ensure collective defense within NATO, and promote free trade.

“These values of democracy, justice and freedom form the foundation of our successful economies,” they wrote in business magazine Wirtschaftswoche.

“We owe it to our industries and our peoples – indeed, to the global community – to broaden and deepen our cooperation,” they said, in a swat at the “America First” rhetoric favored by Trump.

As Western leaders brace for potentially radical changes with Trump moving into the Oval Office in January, Obama wrapped up a visit to Athens on Wednesday, November 16, warning that globalization required a “course correction” to keep voters from drifting to extremes.

“When we see people, global elites, wealthy corporations seemingly living by a different set of rules, avoiding taxes, manipulating loopholes… this feeds a profound sense of injustice,” he said.

But in an extraordinary break with tradition for Germany, which long saw the US as its protector and closest ally, Merkel pointedly said cooperation must be based on shared democratic principles and respect for human dignity.

Analysts said the meeting could be seen as a kind of passing of the torch from Obama to Merkel, who the outgoing president has called “probably… my closest international partner”. 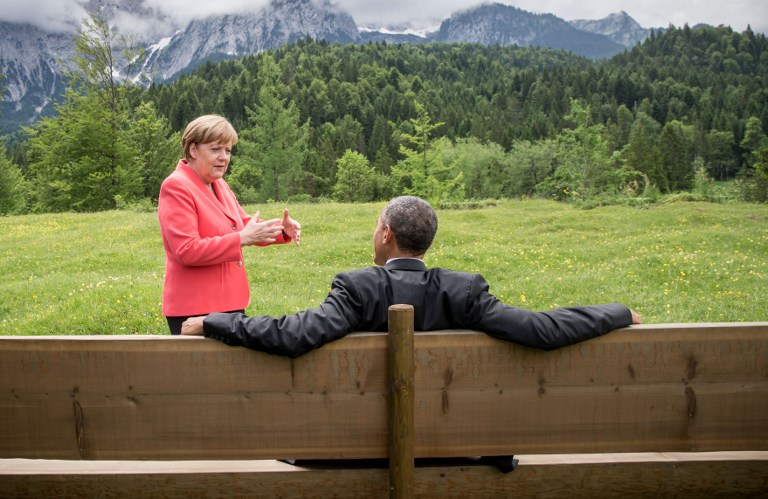 In an interview with German public broadcaster ARD and news magazine Der Spiegel, Obama said Merkel had served her country well in the 11 turbulent years she has been in power.

“She has great credibility and she is willing to fight for her values,” he said on his sixth trip to Germany as president.

“I am glad that she is there. I think the German people should appreciate her. Certainly I have appreciated her as a partner.”

Obama dined with Merkel at his hotel late Wednesday and will hold talks with her on Thursday followed by a meeting Friday, November 18, including the leaders of Britain, France, Italy and Spain.

He has relied on Merkel’s strength in Europe on several fronts including helping to defuse the Ukraine conflict and taking in hundreds of thousands of Syrian refugees.

As he exits the stage, many observers say Merkel’s importance as a defender of Western values will only continue to grow, assuming that as expected, she runs for a fourth term next year.

Obama held the biggest rally of his 2008 campaign in Berlin, using the once-divided city’s rebirth as a symbol of progress as he made a hopeful call for a world without nuclear weapons to 200,000 cheering fans at the Victory Column monument at sunset.

He and Merkel, who took power in 2005, soon developed a strong partnership, despite rifts over revelations of NSA spying on Merkel’s mobile phone and Obama’s vocal opposition to Germany’s austerity-driven response to the European debt crisis.

Germans at the Victory Column on a grey November day said they were sad to see him go and anxious about what the Trump administration would bring.

“We were so hopeful after George W. Bush left office,” said Thomas Schmidt, 54, a business clerk who recalled being “thrilled” when he watched Obama’s Berlin speech on television.

“It was a euphoric mood, a little bit like when the Berlin Wall fell. The feeling now with Trump is much more wary. No one knows what he might do.”

Matthias Krah, 43, an IT project manager, found the prospect of Trump in the White House “scary” and predicted a major realignment of transatlantic ties.

“It means we Europeans will need to look inward. Maybe we can start doing without the US,” he said.

Two out of 3 Germans now say they fear ties with Washington will suffer under the new administration, according to a poll last week for public broadcaster ZDF.  – Rappler.com