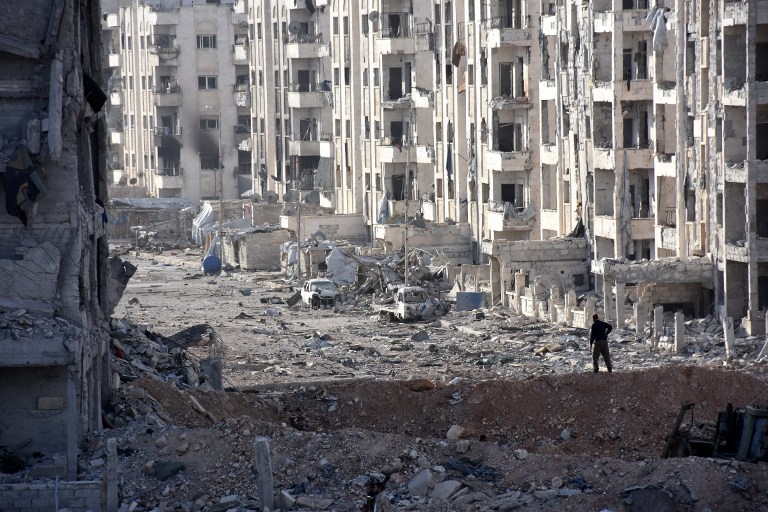 ALEPPO, Syria (UPDATED) – Syrian air strikes and shelling killed 25 civilians in eastern districts of Aleppo on Thursday, November 17, a monitor said, on the third day of a wide-ranging regime assault on rebel-held areas.

At least 65 civilians have been killed in east Aleppo since the start of a regime offensive on Tuesday, November 15, the Observatory said.

The renewed bombardment has shattered a month of relative calm in the devastated east of the divided northern city.

An Agence France-Presse correspondent in the eastern districts said explosions from barrel bombs dropped by aircraft had been heard since 10 am local time (0800 GMT).

One of the air strikes targeted a civil defense center in the Bab al-Nayrab neighborhood with no reported casualties, the correspondent said.

The Observatory said rebels responded with shelling of the city’s government-controlled western neighborhoods.

Once Syria’s economic powerhouse, Aleppo has been roughly divided into a regime-controlled west and a rebel-held east since 2012.

No aid has entered the city’s eastern neighborhoods since government troops surrounded them in mid-July, and humanitarian organizations said this week food aid stockpiled there had all but run out.

The recent bombardment has ended a period of relative respite in east Aleppo, where regime ally Russia halted air strikes on October 18 ahead of a series of brief ceasefires.

Moscow said on Wednesday, November 16, it had not carried out any raids on the city since that date.

But Russia said on Tuesday it was launching a major operation against the Islamic State (ISIS) jihadist group and former Al-Qaeda affiliate Fateh al-Sham Front, including in the northern province of Idlib.

The province is mostly controlled by a rebel alliance known as the Army of Conquest, which groups Islamist factions with jihadists of the Fateh al-Sham Front.

In Idlib, Russian strikes on Thursday killed 6 civilians from the same family including two children, the Observatory said.

The strikes were on the village of Kafr Jalis, the monitor said, where 7 civilians including two children were also killed in Russian strikes on Tuesday.

The Britain-based group, which relies on a network of sources inside Syria for its information, says it determines what planes carried out raids according to their type, location, flight patterns and the munitions involved.

An Agence France-Presse reporter in Kafr Jalis said that Thursday’s strikes had hit exactly the same neighborhood as Tuesday’s raid.

Suleiman Zaynun, a resident in his 20s, told Agence France-Presse that there were no rebel military headquarters in the village and that fearful inhabitants had started to flee after the second strike in three days.

While some left the village carrying their belongings, others buried the dead, the reporter said.

Syria’s war has displaced more than half the population and killed over 300,000 people since it started in March 2011 with anti-government protests.