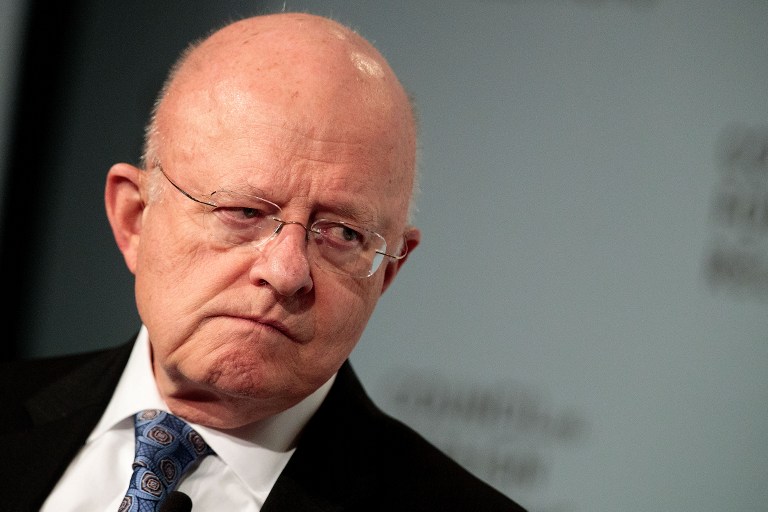 WASHINGTON DC, USA (3rd UPDATE) – US Director of National Intelligence James Clapper said on Thursday, November 17, that he had submitted his resignation, stepping down as President-elect Donald Trump begins to assemble his new administration.

Clapper, whose job is to coordinate the work of 17 disparate agencies like the Central Intelligence Agency and the National Security Agency, said resigning “felt pretty good” after six years in the job.

In a Congressional hearing he made clear he was not available to stay on in the job after Trump takes office on January 20.

“I got 64 days left and I think I will have a hard time with my wife for anything past that,” he said.

Confirming that, the Directorate of National Intelligence said later in a tweet that “As required of all appointed Administration officials, DNI Clapper has signed a letter of resignation effective at noon on Jan 20, 2017.”

Clapper’s tenure as US intelligence chief was marred by the leak of documents from the NSA demonstrating that it collected massive amounts of data on the communications of US citizens. In March 2013 Clapper denied in testimony to Congress that the agency swept up such data from US telecommunications providers.

Months later former NSA contractor Edward Snowden leaked documents showing that the NSA did collect such data, leading to accusations that Clapper lied to Congress on the issue and calls for his resignation.

The data also showed how the US spies on allies, sparking tensions with top partners like France and Germany.

In an interview in 2014 Snowden said that Clapper’s denials had prompted him to leak the top secret data.

Clapper though condemned Snowden for damaging the US ability to collect intelligence and for giving away US secrets to enemies.

“What Snowden has stolen and exposed has gone way, way beyond his professed concerns with so-called domestic surveillance programs,” Clapper said to a hearing in January 2014.

“As a result, we’ve lost critical foreign intelligence collection sources, including some shared with us by valued partners.”

But he also said separately that the revelations sparked a debate over balancing government spying powers and privacy rights that “actually probably needed to happen.” – Rappler.com