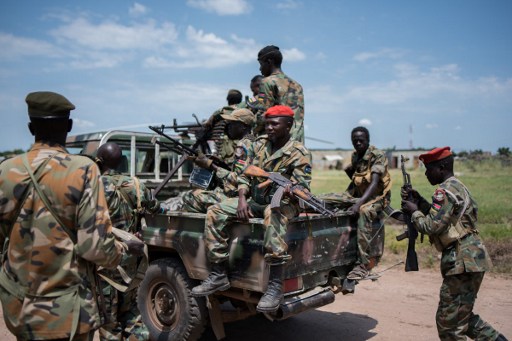 UNITED NATIONS – The United States on Thursday launched a bid at the Security Council to impose an arms embargo on South Sudan following UN warnings that the war-torn country could descend into genocide.

US Ambassador Samantha Power said a draft resolution will be presented to the council in the coming days to ban weapons sales to the African country and impose sanctions, setting the stage for a clash with Russia, which opposes an arms embargo.

“South Sudan is a nation at the precipice,” Power told the council.

“In the coming days, the United States will put forward a proposal to impose an arms embargo on South Sudan and targeted sanctions on the individuals who have been the biggest spoilers to achieve lasting peace,” she said.

Of the council’s permanent, veto-wielding members, Britain and France backed the proposed arms embargo, but Russia reaffirmed its opposition and China expressed reservations.

The move followed a recent report by UN Secretary General Ban Ki-moon, who warned that South Sudan faces a “very real risk of mass atrocities” and that 14,000 peacekeepers deployed in the country would not be able to stop such a bloodbath.

The US-drafted text seen by Agence France-Presse calls for a one-year ban on all sales of arms, weapons, ammunition, military vehicles and equipment.

Power said months of talks with South Sudan’s leaders had failed to persuade them to opt for peace as she made the case for a travel ban and an assets freeze on those behind the violence.

“There is no good reason why we would not deprive those who have shown a willingness to commit mass atrocities of the means of doing it more efficiently,” she said.

Russian Deputy Ambassador Petr Iliichev dismissed an arms embargo as “premature,” saying it would “hardly be helpful in settling the conflict” and warning that sanctions against South Sudan’s leaders would be “the height of irresponsibility.”

In a barb directed at the United States, he suggested that President Salva Kiir was being targeted to share the same fate as Moamer Kadhafi, the Libyan leader toppled in 2011.

China’s Deputy Ambassador Wu Haito said the council should refrain from sanctions “to avoid complicating the situation” and “send more positive signals” instead.

Returning from a visit to South Sudan, the UN’s adviser on genocide prevention, Adama Dieng, said he “saw all the signs that ethnic hatred and targeting of civilians could evolve into genocide if something is not done now to stop it.”

He cited perceptions that Kiir’s army was “increasingly ethnically homogenous,” composed mostly of ethnic Dinka, who are preparing to launch attacks against Nuer and other groups.

Dieng urged the council to end the “devastating” flow of weapons fueling the war.

The authorities in Juba, confronting an “armed rebellion intent on overthrowing the government,” he argued, should not be deprived of the means to defend themselves.

The country won independence from Sudan in 2011 with strong support from the United States.

A peace deal between Kiir and rebel leader Riek Machar in August last year had raised hopes of peace, until clashes erupted in Juba 4 months ago. – Rappler.com