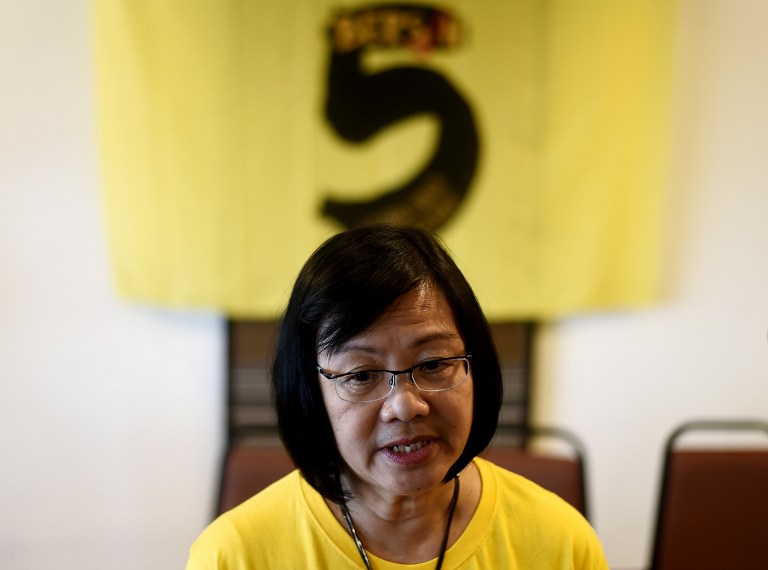 The arrest of Maria Chin Abdullah, chair of the pro-reform NGO alliance Bersih, looked likely to raise tensions further before Saturday’s rally in Kuala Lumpur, which a pro-government rightist group is vowing to disrupt.

Chin was arrested Friday afternoon along with another leading Bersih activist, Mandeep Singh, in a raid on the group’s offices in which police also seized computers and documents, Bersih steering committee member Jay Jay Denis said.

Police said they plan to hold the pair at least overnight and possibly longer, Denis said, calling the arrests the latest in a series of actions by authorities to intimidate rally organizers and supporters into cancelling the demonstration.

“The rally will definitely go ahead. There is no turning back,” Denis said.

Relevant police officials could not be reached for comment.

Malaysia has been seized for more than a year by allegations that billions of dollars were plundered from 1MDB, a state investment fund Najib founded and oversaw, in an audacious campaign of fraud and embezzlement.

Saturday’s protest over 1MDB is the second in 15 months organized by Bersih, which means “clean” in Malay and which has become Malaysia’s leading independent voice pushing for reform.

Bersih drew tens of thousands of its yellow-clad supporters to two days of peaceful protests in Kuala Lumpur and other locations in August 2015 to demand Najib’s removal over the scandal.

Najib, 63, denies wrongdoing, but last year purged critics in his government and shut down domestic investigations.

Critics have accused him of a lurch toward autocracy as he moves to contain the damaging scandal with elections due within 18 months.

Chin was to be investigated under a law prohibiting acts that “threaten parliamentary democracy,” Denis said. Singh was arrested on suspicion of violating an anti-rioting law.

In a radio address Friday, Najib dismissed Bersih as a “deceitful” tool of the opposition seeking “to unseat a democratically-elected government”.

Saturday’s protest marks the finale of a seven-week Bersih campaign to highlight the scandal across the country and prevent it being swept under the rug by Najib’s government.

Tensions have soared ahead of the rally due to threats by the leader of the “Red Shirts” rightist movement — aligned to Najib’s party — to mobilise its supporters and block Bersih from gathering. – Rappler.com