Nov 20, 2016 12:02 AM PHT
Agence France-Presse
Facebook Twitter Copy URL
Copied
Syrian government troops begin a new assault on the rebel side of Aleppo as they renew their bid to recapture the east of the city 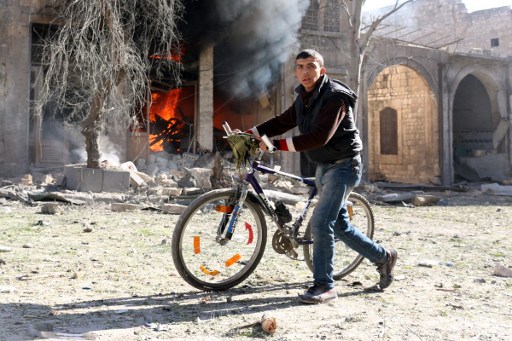 ALEPPO, Syria – Intense government air strikes and artillery fire killed at least 27 people on Saturday, November 19, in rebel-held parts of Syria’s Aleppo, where hospitals have been destroyed and schools forced to close.

“It is a catastrophic day in besieged Aleppo with unprecedented bombardment with every type of weapon,” a member of the White Helmets rescue group said in a video posted on the organization’s Facebook page.

Syrian government troops began a new assault on the rebel side of Aleppo on Tuesday, November 15, as they renewed their bid to recapture the east of the city.

Once Syria’s economic powerhouse, Aleppo has been ravaged by the war that has killed more than 300,000 people since it began with anti-government protests in March 2011.

More than 250,000 people remain in the opposition-held part of the city, which has been besieged by the regime since July.

The intensity of the bombardment has forced residents to stay indoors, leaving streets all but deserted.

“There’s barely a neighborhood that has been spared,” said Abdel Rahman.

Schools in east Aleppo, many of which already operate from basements because of government attacks, announced in a statement they would close Saturday and Sunday (November 20) “for the safety of students and teachers, after the barbarous aerial strikes”.

The bombardment has badly affected rescue and medical facilities in the east, which have already routinely been targeted in government attacks.

On Friday, November 18, regime shelling partly destroyed one of the last hospitals in the east, killing two patients and forcing it to shut.

The last pediatric hospital in the east was also forced to close after being hit in multiple attacks, with medical staff evacuating babies from incubators and transferring them to a new location.

“This is a dark day for east Aleppo,” said Teresa Sancristoval, emergency coordinator for the Doctors Without Borders (MSF) charity.

“The severity of the bombing has inflicted huge damage on the few hospitals working around the clock to provide medical care.”

A center belonging to the White Helmet rescue group in the Bab al-Nayrab district was also totally destroyed in an air strike on Friday, an AFP correspondent said.

The White Helmets have struggled to keep up with calls for help since the renewed bombardment began, at times unable to leave their centers because of the intensity of the government fire.

“We have no more (body) bags,” said one rescue worker in another video posted Saturday by the group from Aleppo.

The Observatory said at least 27 civilians were killed in east Aleppo on Saturday alone, with the toll likely to rise because of the number of seriously wounded.

These deaths brought the toll since the renewed assault began on Tuesday to 92, with state media saying two people were also killed in rebel fire on the government-held west of Aleppo on Saturday.

The assault on rebel-held Aleppo has ended a period of relative respite after regime ally Russia halted its strikes and organized a series of brief truces intended to convince residents and surrendering rebels to leave.

Syria expert Thomas Pierret said regime forces “intended to combine air strikes with famine resulting from the siege to get rebels to surrender”.

“Aleppo is now completely besieged and its residents are starting to die of hunger,” he said.

Elsewhere, an alliance of Kurdish and Arab fighters known as the Syrian Democratic Forces said they had seized the hilltop village of Tal Saman from the Islamic State group.

The village is just 25 kilometers (15 miles) from IS’s de facto Syrian capital of Raqa, which the SDF began an operation to recapture earlier this month.

The SDF is being supported by the US-led coalition fighting IS, which is carrying out air strikes, but has also stepped up deliveries of weapons and equipment to the alliance, its commanders told AFP. – Rappler.com