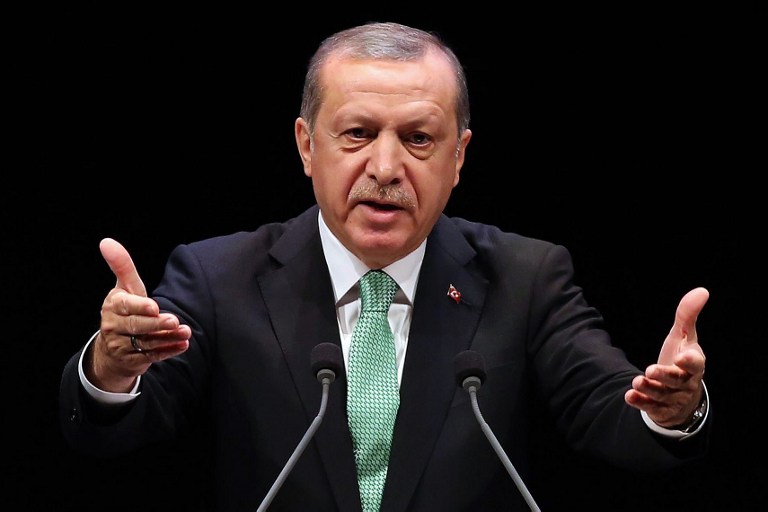 ISTANBUL, Turkey – President Recep Tayyip Erdogan says Turkey should not be “fixated” on joining the European Union (EU) and has reiterated the idea of joining Russia and China in a Eurasian security group, local media reported Sunday, November 20.

His comments come as Turkey’s decades-long hopes of joining the EU have reached a nadir, driven by the aftermath of the July 15 botched coup.

“Turkey should first of all feel relaxed about the EU and not be fixated” about joining it, Erdogan told Turkish journalists on a plane from Uzbekistan, Hurriyet newspaper and other media reported.

“Some may criticize me but I express my opinion. For example, I say, ‘Why shouldn’t Turkey be in the Shanghai 5?'” he said.

The Shanghai Cooperation Organization (SCO) – also called the Shanghai Pact – is a loose security and economic bloc led by Russia and China. Other members are Kazakhstan, Kyrgyzstan, and Tajikistan.

Erdogan said he had already discussed the idea with Russian President Vladimir Putin and with Kazakh President Nursultan Nazarbayev.

Erdogan has several times floated plans for Turkey to join the SCO, a move that could scupper its long-standing EU membership bid.

The SOC option became clouded, though, when a Russian warplane was downed by the Turkish air force last November.

Turkish media reported in August that Nazarbayev mediated a deal between Ankara and Moscow to smooth over the dispute.

Turkey formally applied to become an EU member in 1987 and accession talks only began in 2005, even though Ankara’s aspirations to become part of the bloc dates back to the 1960s.

Erdogan this week warned the EU to decide by year’s end on its membership bid, threatening to otherwise call a referendum on this matter.

Turkey and the EU agreed to speed up membership talks in March as part of an accord on curbing migrant flows into Greece.

The deal was clinched in return for several incentives for Ankara including EU cash assistance for Syrian refugees in Turkey, as well as visa-free travel to Schengen area by Turks.

But the process, which was already in difficulty, is on a sharp downward spiral following Ankara’s crackdown after the attempted coup.

Mass arrests and job dismissals and measures against the Turkish press have triggered a sharp reaction from EU politicians and rights watchdogs.

Some European parliamentarians have even backed calls for membership talks with Ankara to be halted. – Rappler.com