Pope shuts Holy Door after jubilee of hope for sinners 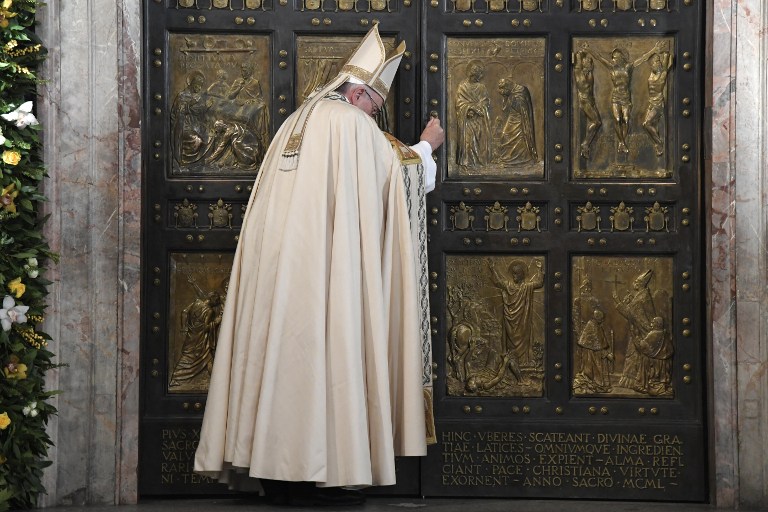 VATICAN CITY (UPDATED) – Pope Francis on Sunday, November 20, brought to a close the Catholic Church’s “Year of Mercy,” shutting the Holy Door at Saint Peter’s after a year in which he raised Mother Teresa to sainthood and took in Syrian Muslim refugees.

The Argentine pontiff, who says he is inspired by Saint Francis of Assisi, spent the year with the downtrodden, holding special masses and passing one Friday every month with refugees, victims of sex trafficking, the sick, the elderly, and vulnerable children.

At a solemn ceremony in front of the paneled bronze doors at the Vatican’s basilica – wreathed in white flowers and green foliage and flanked by Swiss guards – the pope paused to pray, clutching the cross he wears around his neck.

He walked slowly up the 3 steps into the basilica and in silence pulled shut the doors, which will later be walled up from the inside as per tradition until the next “ordinary jubilee” in 2025.

The “extraordinary Jubilee” was only the 3rd since the tradition began 700 years ago.

The watchword of mercy meant helping the unfortunate, and welcoming sinners and outcasts back into the fold. The pope hoped compassion would not only counter xenophobia but also draw people to the church.

“God has no memory of sin,” Francis said at a mass attended by 70,000 worshippers according to the Vatican.

“And he believes that it is always possible to start anew, to raise ourselves up.”

He said the faithful should “ask for the grace of never closing the doors of reconciliation and pardon, but rather of knowing how to go beyond evil and differences.

“Even if the Holy Door closes, the true door of mercy, which is the heart of Christ, always remains open wide for us.”

The pontiff ruled that for the jubilee every priest in the world would be able to absolve what the Church considers the sin of abortion.

But with the “Year of Mercy” over, he was quick to remind the faithful that in the Catholic rule-book it was still “a horrendous crime.”

“They get rid of them (fetuses) because it’s better that way, it’s more convenient. It’s a very serious sin,” he said in a television interview for TV2000 set to air later Sunday.

The 79-year old also repeated his call for a “a poor Church for the poor,” warning that “the biggest enemy of God is money.”

Francis had decreed so-called “Holy Doors” should be opened across the world for the jubilee for the first time, so that people everywhere could pass through them and be forgiven for wrongs the Church labels as sins.

Eschewing tradition, he opened the first one not at Saint Peter’s but in the cathedral of Bangui in Central African Republic – flagging the importance of dioceses far from Rome.

He also handpicked more than 1,000 “super confessors,” able to forgive sins usually only pardonable by the pontiff.

In a crowd-pleasing move, Francis had the remains of Saint Padre Pio – a favorite among those looking for compassion and healing – brought to Rome and carried through the streets to the Vatican.

Thousands turned out to glimpse the body of a man reputed by believers to have been able to levitate, read minds, and appear in foreign lands while remaining at the same time in his friary.

Over 100,000 pilgrims, including Queen Sofia of Spain and 1,500 homeless people, flocked to the Vatican in September for the canonization of Mother Teresa.

But the pope ensured the majority of the jubilee events centered on the outcast or the abandoned, holding special masses for the disabled, the poor, the homeless, and prisoners – including some serving life sentences.

Unafraid of angering traditionalists, Francis said protecting the environment should be added to the 7 corporal works of mercy drawn from the Gospels, such as feeding the hungry and visiting the sick.

And in perhaps the highlight of the year, he ended a one-day trip to the Greek island of Lesbos – Europe’s migration hotspot at the time – by taking 3 Syrian refugee families, all Muslim, back to Rome with him. – Rappler.com