Nov 20, 2016 9:16 PM PHT
Agence France-Presse
Facebook Twitter Copy URL
Copied
Iraqi civilians who escaped from the Islamic State (ISIS) group stronghold of Mosul say jihadists forced them from their villages and drove them 'like sheep' to use as human shields 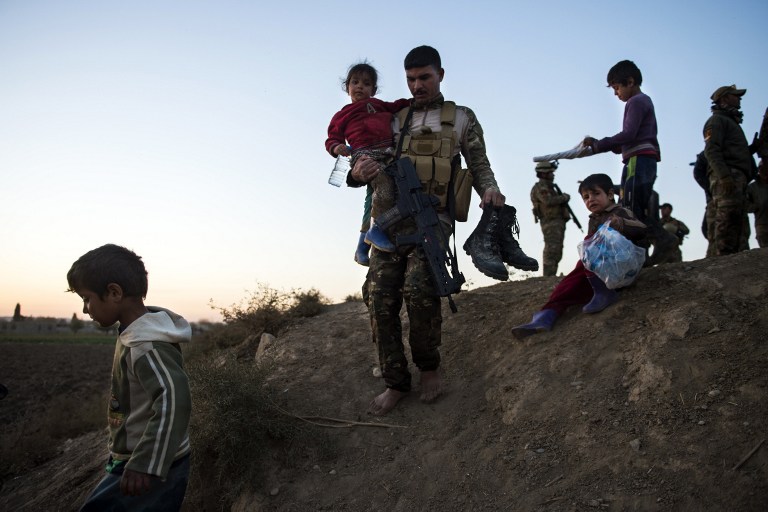 QABR AL ABD, Iraq – Iraqi civilians who escaped from the Islamic State (ISIS) group stronghold of Mosul said jihadists forced them from their villages and drove them “like sheep” to use as human shields.

Bashar huddled with his family on the back of an Iraqi security forces pick-up truck after finally fleeing an area of Mosul still held by ISIS.

As government forces earlier this month advanced on the city – the last major population centre held by ISIS in Iraq – the family was herded with residents from outlying villages into Mosul by the retreating jihadists as an insurance against the US-led coalition air strikes and Iraqi shelling.

Eventually they got lucky and managed to escape – trekking homewards on foot before the small group he was with managed to attract the attention of interior ministry troops on the other side of the river Tigris.

The troops sent a boat for them and brought them across on a last leg that finally saw them get out of ISIS territory.

“We saw the security forces and started shouting to them so they came to us,” Bashar told Agence France-Presse, shivering in the chilly evening air.

“I swear we are going to die from cold.”

What they left behind, he said, was an increasingly desperate situation for civilians in the bulk of the Mosul still controlled by IS as Iraqi forces battle fierce resistance while pushing slowly into the eastern part of the city.

“I swear the situation is not good – shooting everywhere, families sleeping in the streets, people are so tired,” he said. “They are in the middle of the fire.”

The United Nations has reported that ISIS forced “tens of thousands of people from their homes in some districts around Mosul” as Iraqi forces pushed the jihadists back.

Among them were Hassan, his mother and their family, who said they were “driven like sheep” towards the ISIS bastion when the government offensive started.

“Mosul is full of people. They lack proper accommodation. They don’t have food,” he said. “They are just waiting for their destiny.”

Hassan’s father and some of their relatives are still trapped inside Mosul, so he asked Agence France-Presse to use a pseudonym and his mother refused to give her name.

They said they snuck out of the violence-wracked city at night and spent two days without sleep as they dodged ISIS and got lost trying to find their way home.

After spending their first night back in their house they were still exhausted but relieved to be out from under the control of the jihadists.

Hassan’s mother pointed to her feet and said that they were still swollen from all the walking it took to get back to their village.

“We made it out because we felt like we had nothing to lose,” she said. – Rappler.com