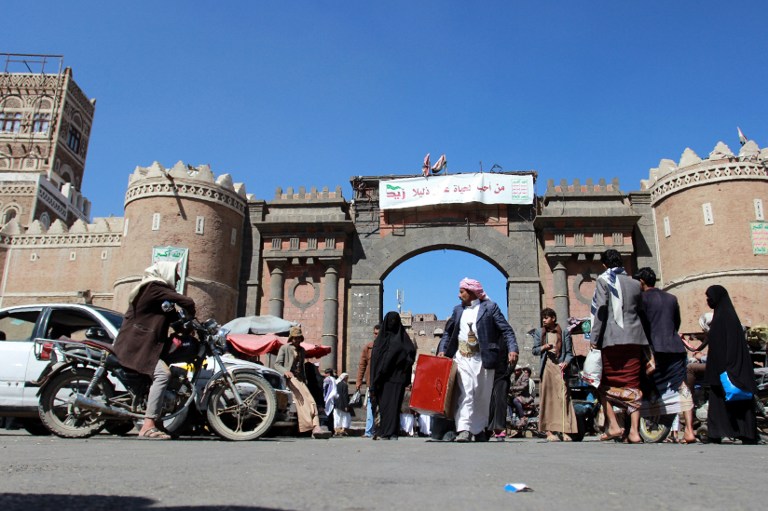 SANAA, Yemen (UPDATED) – Sporadic fighting shook parts of Yemen on Sunday, November 20, as the Saudi-led coalition battling Iran-backed rebels warned that a fragile US-brokered ceasefire would not be extended unless violations ended.

Aid agencies have pleaded for unhindered humanitarian access in Yemen to allow the delivery of life-saving supplies to civilians reeling from a conflict that has left thousands dead.

The 48-hour ceasefire began on Saturday, November 19, following an intervention by US Secretary of State John Kerry who met Huthi rebel representatives in Oman and urged President Abedrabbo Mansour Hadi’s government to sign up.

A military official said there were “limited exchanges of fire” in the flashpoint southwestern city of Taez, where heavy fighting in recent days has left dozens dead.

The rebels fired mortar rounds at a military hospital in the city’s east, setting its dialysis unit on fire, a medical source said.

Rebel rocket fire wounded 6 civilians, including 4 children, in the center of Taez on Sunday evening, according to military and medical sources.

An AFP correspondent in Sanaa said there had been no coalition air strikes in the rebel-held capital since the 48-hour truce took effect.

But the coalition’s air defenses destroyed 3 ballistic missiles fired by the rebels at dawn at Marib province, east of Sanaa, a military official said.

Coalition jets responded by bombing rebel positions in the area, the source said.

In Midi, in the northwest, fighting killed 4 rebels and 3 soldiers, a military official said.

It escalated in March 2015 when neighboring Saudi Arabia – the archfoe of Iran – launched a military campaign to drive back the rebels.

The United Nations says more than 7,000 people have been killed and nearly 37,000 wounded.

Coalition spokesman Major General Ahmed Assiri accused the insurgents of 180 violations in the first 10 hours of the ceasefire which began at midday (0900 GMT) Saturday.

When asked if the coalition would extend the truce into Monday, November 21, Assiri said: “If there is a complete halt to the (rebel) violations, there will be an extension. If they do not stop, this would be a direct violation of the ceasefire conditions.”

While the rebels declared their commitment to the peace push, Hadi’s government initially rejected the truce, saying it had not been consulted.

But the government came under huge pressure to back down in the face of an international outcry over the mounting civilian death toll.

The Huthis on Sunday welcomed “all efforts to end the aggression” but denounced the Saudi side for escalations, according to the rebel-controlled sabanews.net website.

Relief agencies had been hoping the ceasefire would allow the delivery of aid in areas that were inaccessible due to fighting.

The UN children’s agency UNICEF said the ceasefire “offers new hope in a situation that is increasingly catastrophic for children.”

The conflict has killed well over 1,000 children and left millions more without access to basic care and at risk of imminent death, said UNICEF executive director Anthony Lake.

One and a half million children were suffering from acute malnutrition, and thousands more were at risk from rapidly spreading cases of cholera and measles.

“For some time now we have been constrained in our efforts to reach these children with therapeutic food and medical supplies,” Lake said in a statement.

“We urge all parties to the ceasefire to allow unhindered humanitarian access for the delivery of life-saving supplies and services to all children in need.

“It cannot be in anyone’s interest to endanger the future of Yemen – its children,” he added.

A spokesman for the renegade Yemeni troops, Brigadier General Sharaf Luqman, said on Saturday that they would also abide by the truce.

Six previous attempts to clinch a ceasefire foundered, the latest in October.

UN envoy Ismail Ould Cheikh Ahmed urged all parties “to encourage full respect for the cessation of hostilities and to ensure that it leads to a permanent and lasting end to the conflict.” – Rappler.com