APEC 2016: After poncho mockery, world leaders tone it down in Peru with shawls

Nov 21, 2016 8:24 AM PHT
Agence France-Presse
Facebook Twitter Copy URL
Copied
By opting for shawls rather than ponchos, Peru may have been seeking to avoid the mockery that accompanied its hosting of the 2008 APEC summit

LIMA, Peru – After sparking ridicule several years ago by dressing world leaders in baggy ponchos, Peru toned it down Sunday, November 20, by getting dignitaries at a major summit to wear shawls made from the fine wool of a mountain-dwelling creature called the vicuna.

From Chinese tunics to Philippine pineapple shirts, the Asia-Pacific Economic Cooperation (APEC) group has a decades-old tradition of getting presidents and prime ministers to don traditional garments of the host country for their annual get-together.

And Peru was not going to disappoint as heads of APEC nations gathered in the capital Lima, with leaders appearing for the traditional “family photo” with long, brown shawls made from the coveted wool of the vicuna – a llama-like animal – draped over their shoulders.

The global power players, among them US President Barack Obama, China’s Xi Jinping and Japan’s Shinzo Abe, looked relaxed, smiling and waving as they lined up in alphabetical order according to their countries.

By opting for shawls rather than ponchos, the attire generally associated with the South American nation, Peru may have been seeking to avoid the mockery that accompanied its hosting of the 2008 APEC summit.

On that occasion, world leaders appeared in voluminous ponchos, leading some to poke fun at the unflattering, shapeless garments for resembling potato sacks. 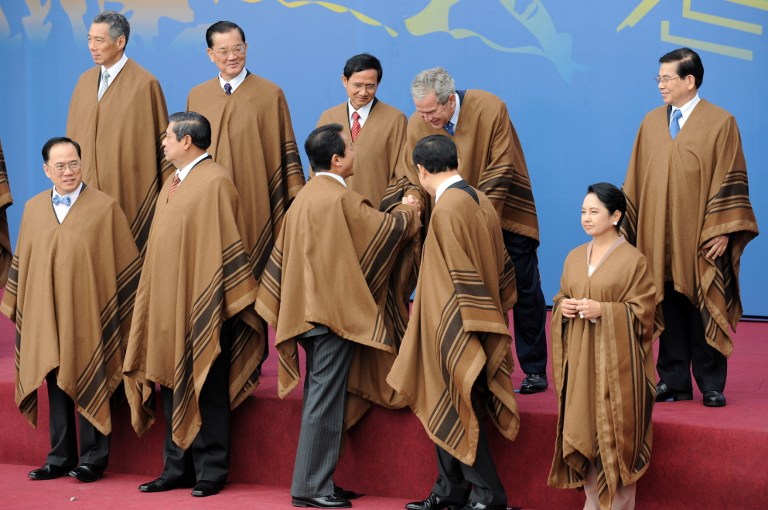 The wool of the vicuna, an animal found in the Andes mountains, is among the rarest natural fibers in the world, making it extremely costly and prized by fashion designers.

A businesswoman working in the fashion industry in Peru told Agence France-Presse the price of such a shawl would be “between $1,500 and $3,000, depending on the quality.”

The vicuna, which as the national animal of Peru appears in the country’s coat of arms, was revered by the Incas, whose ancient empire stretched over a large part of South America. Only members of royalty were permitted to wear its wool.

This year’s was a relatively modest APEC fashion parade compared to previous editions, which have sometimes led to awkward moments.

When Vietnam hosted the summit several years ago, world leaders looked visibly uncomfortable as they shuffled onto the stage for a photo-op wearing the tight-fitting traditional “ao dai” tunics, which are now most commonly worn by women.

The tradition harks back to 1993, when US President Bill Clinton put his APEC colleagues in macho-looking leather bomber jackets – the kind worn by World War II fighter pilots. – Rappler.com