Thai junta ramps up its royalism with mass loyalty ceremony

Nov 22, 2016 7:56 PM PHT
Agence France-Presse
Facebook Twitter Copy URL
Copied
'We will remain in allegiance to all the kings of the Chakri dynasty until we die,' says Junta leader Prayut Chan-O-Cha 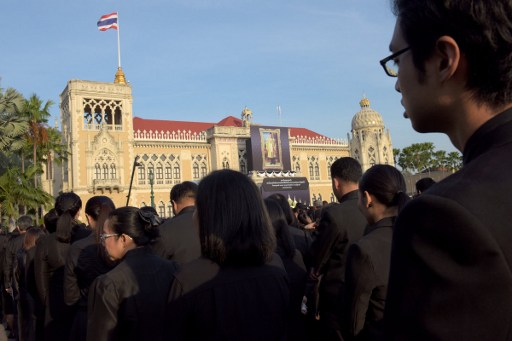 BANGKOK, Thailand – From civil servants to school children, soldiers and celebrities, tens of thousands of Thais took part in a mass “oath of loyalty” on Tuesday, November 22, to the country’s recently deceased monarch.

King Bhumibol Adulyadej’s death on October 13 after a 7-decade reign has sparked mass displays of grief and left the politically-divided nation without its only unifying figure.

Tuesday’s ceremony, which was ordered by the country’s arch royalist junta leadership, was a vivid illustration of both Thai devotion to their late monarch and how the country’s military rulers have further ramped up the kingdom’s well-oiled royalist propaganda machine since Bhumibol’s death.

Junta leader Prayut Chan-O-Cha, who seized power in 2014, led 3,000 civil servants in a ceremony in Bangkok in front of a giant portrait of the king.

“We will remain in allegiance to all the kings of the Chakri dynasty until we die,” Prayut said in the oath, which called on Thais to “respect the law” and emulate the king’s teachings.

The scene was repeated up and down the country with all public servants, state employees and armed forces personnel expected to take part.

Thai television channels broadcast footage of children on their knees forming a giant representation of the number 9 – a reference to Bhumibol’s official title Rama IX.

Channel 3, Thailand’s most popular entertainment channel, showed its large cast of celebrities dressed in black, taking the oath and singing the royal anthem.

The military has long portrayed itself as the ultimate defender of the monarchy, often using perceived threats to the institution as justification for many of the 12 successful coups they have carried out since the end of absolute rule in 1932.

The relationship was reciprocal, with Bhumibol signing off on their coups.

Many saw their 2014 putsch as a move to ensure they were in charge ahead of any succession.

Bhumibol’s named successor is Crown Prince Maha Vajiralongkorn, who has yet to attain his father’s widespread popularity or unifying status.

Vajiralongkorn surprised many and veered from tradition by asking to delay his proclamation as king in order to grieve with the nation, according to the junta.

That caused initial concern that the succession was unclear, something the junta denied.

A military source told Agence France-Presse on Tuesday the expected proclamation date was December 1 when Thailand’s rubber-stamp parliament, the body which announced the new monarch, will next meet. – Rappler.com