Swiss talks break down in blow for Cyprus peace hopes 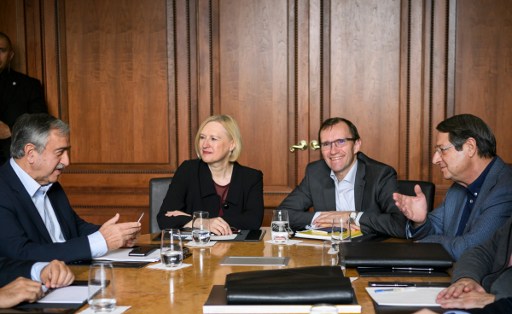 NICOSIA, Cyprus (UPDATED) – Crunch negotiations on ending the decades-old division of Cyprus broke down Tuesday, November 22, with its rival leaders still far apart and no date set for a new round of UN-brokered talks.

It was the second round of intensive meetings this month between Greek Cypriot leader Nicos Anastasiades and his Turkish Cypriot counterpart Mustafa Akinci.

The much-heralded talks in the Swiss resort of Mont Pelerin were supposed to produce a map of the internal boundaries of a future federation and pave the way for broader talks aimed at reaching a deal by early next year.

But like the 5 days of negotiations earlier in November, the two-day session broke up in the early hours without progress, and with each side blaming the other.

The spokesman for the island’s internationally recognized Greek Cypriot government held Turkey responsible and said it was “not a good night for our country”.

“We are not at all happy and sincerely regret that as a result of the Turkish attitude it was not possible to complete a promising process,” Nicos Christodoulides told reporters.

The Turkish Cypriot leader accused the Greek Cypriot side of insisting on “maximalist positions” on territory and other thorny issues.

The United Nations, which has sponsored 18 months of negotiations between the two leaders in what had been seen as the best hope of a settlement in years, put a brave face on the breakdown.

“Despite their best efforts, they have not been able to achieve the necessary further convergences on criteria for territorial adjustment that would have paved the way for the last phase of the talks,” UN spokesman Aleem Siddique said.

“The two sides have decided to return to Cyprus and reflect on the way forward.”

Despite the failure, UN chief Ban Ki-moon “remains hopeful that a deal can be reached this year and will personally support those efforts”, his spokesman Stephane Dujarric said.

Greece, for its part, said Athens was “open” for talks with Ankara on the status of the divided island.

“We think this issue is open, we will proceed carefully,” government spokesman Dimitris Tzanakopoulos told reporters.

He said Greek Prime Minister Alexis Tsipras, in a telephone call with Turkish President Recep Tayyip Erdogan last Friday, November 18, “expressed desire for a bilateral meeting”, but no specific date had been set.

Turkey on Tuesday lamented that “a very important opportunity has been missed”.

Foreign ministry spokesman Huseyin Muftuoglu called for talks to resume “without delay”, saying “Turkey’s determination to find a viable solution to the Cyprus issue is ongoing”.

Cyprus has been divided since 1974, when Turkish troops invaded the northern third of the island in response to an Athens-inspired coup seeking union with Greece.

It has always been agreed that some of the territory currently controlled by the Turkish Cypriots would be ceded to Greek Cypriot control in any peace deal.

Turkish Cypriots made up just 18% of the island’s population in 1974, but they currently control more than a third of its territory.

Just how much and what land they should give up has bedeviled 4 decades of talks.

The two leaders had been thought to be close on the percentage of territory to remain under Turkish Cypriot administration in a future federation, with Akinci suggesting 29.2% and the Greek Cypriots proposing 28%.

But they remained far apart on how many Greek Cypriots should be able to return to homes they fled in 1974, with Akinci determined to minimize the number of Turkish Cypriots who would be displaced for a second time.

Greek Cypriot media reports said Anastasiades had reduced his original target of 100,000 to 90,000, but that Akinci was still insisting on fewer than 70,000.

“There was no concrete outcome, particularly as regards the criterion of Greek Cypriots who could return to their homes as a result of territorial adjustments,” said Christodoulides.

A pro-settlement grouping on the Turkish Cypriot side, the Solution and Peace Platform, called for the UN to ensure the two sides resume dialogue, warning “there is no time to lose”.

Anastasiades and Akinci have been among the most outspoken proponents of a deal, but they would still have to sell any agreement they reach to their respective voters.

In 2004, Turkish Cypriot voters approved a UN-drafted peace blueprint but it was resoundingly rejected by Greek Cypriots in simultaneous referendums. – Rappler.com