Trumps picks women, including a critic, for cabinet 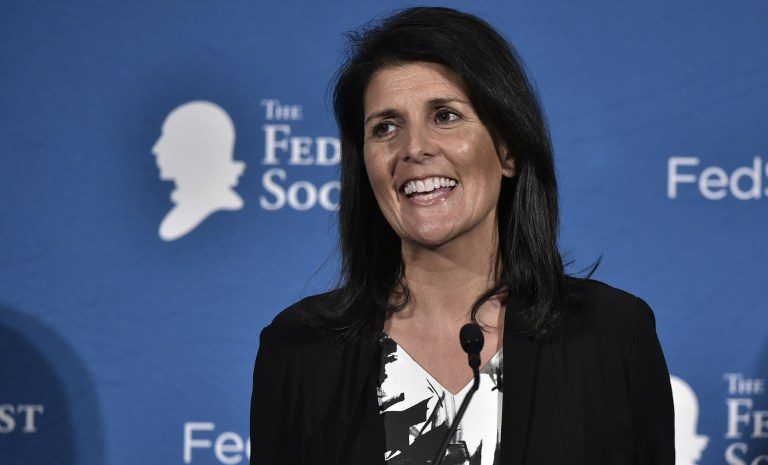 Trump’s nomination of South Carolina’s 44-year-old governor, Nikki Haley, as US ambassador to the United Nations will be seen as a sign he is ready to forgive some foes to raise a bigger tent.

But his choice of wealthy activist Betsy DeVos, a champion of alternatives to local government schools, as education secretary, was another victory for social conservatives.

Trump’s one-time presidential rival, retired neurosurgeon Ben Carson, appeared to be next in line for the nod – reportedly as housing secretary – after he posted on social media that an announcement was imminent.

Trump’s choice of Haley for the UN was announced amid reports that Trump is considering another vocal critic – the former Massachusetts governor Mitt Romney – for the key post of secretary of state.

And it followed a cordial chat between Trump and the New York Times, a newspaper he considers hostile, in which he softened his stance on climate change, torture and prosecuting his defeated rival Hillary Clinton.

The UN ambassador post is of cabinet rank and if Haley – a staunch conservative with no foreign policy experience – is confirmed by the Senate she will become a powerful figure in world diplomacy, despite previously clashing with Trump.

As one of two women tapped so far for Trump’s cabinet, the daughter of Indian immigrants also injects a measure of diversity in a group that until now consisted solely of white men.

Last year, after a white supremacist murdered 9 black churchgoers in South Carolina, Haley supported a decision by legislators to remove the Confederate flag from the state house.

The decision drew protests from racist groups and this year, while campaigning for Trump’s rival in the primaries Marco Rubio, Haley called Trump out for his failure to repudiate the Ku Klux Klan.

“I will not stop until we fight a man that chooses not to disavow the KKK. That is not a part of our party. That is not who we are,” she declared.

Trump, true to form, responded with one of his trademark Twitter insults, declaring: “The people of South Carolina are embarrassed by Nikki Haley!”

But on Tuesday, after video emerged of fans of the so-called alt-right making straight-armed salutes and chanting “Hail Trump,” the president-elect disavowed the movement.

As he works with his advisers in his luxury Mar-a-Lago golf resort outside Palm Beach, all eyes will be on the appointments he makes for a sign of the direction his administration will take.

When Trump’s November 8 election victory still seemed an unlikely prospect, many Republicans and conservative policy experts condemned his anti-Muslim rhetoric, his affinity for Russia or his isolationist and protectionist positions.

Many of these figures are now moderating their tone and looking for work, whether they are lured by the prospect of a powerful job or are keen to serve US interests as a moderating influence inside a Trump administration.

The former Iraq and Afghan war commander, retired general David Petraeus – who resigned as head of the CIA after he was caught sharing classified data with his mistress – made his pitch on Wednesday.

“If you’re asked, you’ve got to serve, put aside any reservations based on campaign rhetoric, and figure out what’s best for the country,” he told BBC Radio.

In May, Petraeus described hardline rhetoric like Trump’s threat to ban all Muslims from traveling to the United States as “toxic” and “corrosive to our vital national security interests.”

This week a Trump aide was photographed carrying notes on a border security plan into Trump Tower. The first three points were legible in the picture, and pointed to stringent vetting for Muslim visa applicants.

The president-elect and his family will stay at Mar-a-Lago through Thursday’s (November 24) Thanksgiving holiday and the weekend. More meetings will be held on Monday with transition officials, his spokesmen said.

Meanwhile, erstwhile Democratic candidate Clinton – who lost to Trump by carrying a minority of the electoral college which decides the election outcome – saw her notional lead in the popular vote tally pass two million votes. – Rappler.com