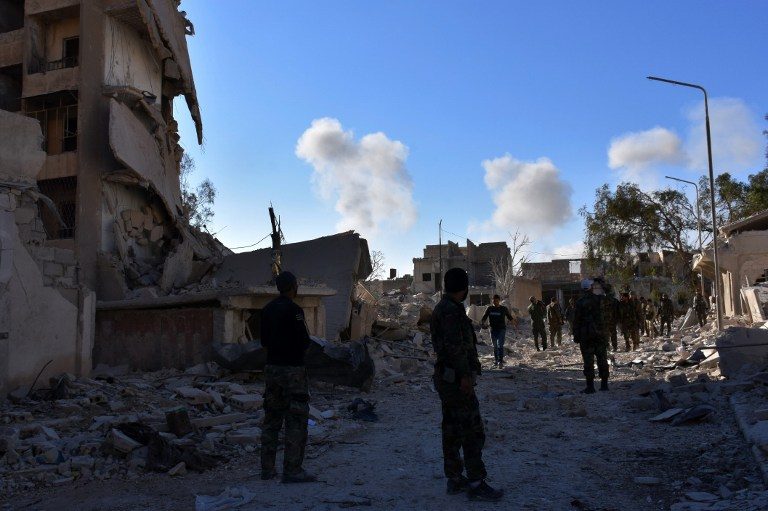 Facebook Twitter Copy URL
Copied
(UPDATED) The regime's advance prompts an exodus of desperate civilians, some fleeing to districts held by the government or Kurdish forces, others heading south into areas still under opposition control

ALEPPO, Syria (4th UPDATE) – Syria’s rebels lost all the northern neighborhoods of their stronghold in east Aleppo on Monday, November 28, as the army made significant advances in its offensive to recapture the entire city.

The regime’s gains have prompted an exodus of desperate civilians, most fleeing to districts held by the government or Kurdish forces, others heading south into areas still under opposition control.

The rebel losses suggested it would only be a matter of time before all of east Aleppo – held by the opposition since 2012 – is back in government hands.

The loss of the city’s east would be a potentially devastating blow for Syria’s rebels, who have seen their territory fall steadily under government control since Russia began an intervention to bolster President Bashar al-Assad in September 2015.

“This is their (the rebels’) worst defeat since they seized half the city in 2012,” said Observatory director Rami Abdel Rahman.

The advances left all of northeast Aleppo under government control.

On Sunday night, the Observatory said nearly 10,000 civilians had fled the east, with around 6,000 moving to the Kurdish-held Sheikh Maqsud neighbourhood and 4,000 to government-held west Aleppo.

State television showed footage of families disembarking from the green coaches regularly used to transport civilians and surrendering rebels from territory retaken by the government.

Kurdish officials published a video they said showed civilians crossing a field and arriving in Sheikh Maqsud, where local forces helped people lift baggage over a makeshift berm as they arrived.

Syria’s Kurds are officially aligned with neither the government nor the rebels, but the opposition views them as effectively allied with the regime in its bid to recapture Aleppo city.

Civilians were also fleeing south to the remaining districts held by the rebels, arriving with little more than the clothes they were wearing, an Agence France-Presse correspondent said.

He said dozens of families arrived in the south of the city overnight, and they were being housed in some of the many empty buildings left behind by earlier waves of residents fleeing the city.

People in southern neighborhoods were donating blankets and other items to the new arrivals, who travelled on foot, exhausted, cold and hungry.

“We are deeply concerned about the impact of the fighting on the civilian population in Aleppo,” he told Agence France-Presse.

Aleppo’s east has been under government siege for more than four months, with international aid provisions exhausted and food stocks running desperately low.

The UN has appealed for access to the east of the city multiple times, but has failed to secure the necessary guarantees to deliver aid.

The government advances mean the regime now controls at least a third of eastern Aleppo, just under two weeks into its renewed bid to recapture the city.

Yasser Youssef, an official from the Nureddin al-Zinki rebel group, said the government’s advance was the result of support from Russia and Iran, both staunch allies of Damascus.

“For all the past years, we have resisted with the primitive means we have had, but today we’re resisting Iran and Russia,” he said.

“Today we’re fighting armies and militias from every corner of the globe.”

The assault has been waged with heavy air strikes, barrel bomb attacks and artillery fire that has killed at least 225 civilians, including 27 children, in east Aleppo, according to the Observatory.

Rebels have also fired onto the government-held west of the city, killing at least 27 civilians, among them 11 children, since November 15, the monitor says.

Syria’s Al-Watan daily, which is close to the government, said the next stage of the operation would be “to divide the remaining (rebel-held) area into… districts that will be easily controlled and to capture them successively.”

The advance would then “push the gunmen to turn themselves in… or accept national reconciliation under the terms of the Syrian state.”

Fabrice Balanche, a Syria expert at the Washington Institute for Near East Policy, said the regime retaking east Aleppo “would be a turning point” as it would then hold “the five largest cities in Syria”.

Assad’s forces already control the capital Damascus, the central cities of Homs and Hama and the coastal city of Latakia.

More than 300,000 people have been killed since Syria’s conflict began with anti-government protests in March 2011.

The war has also displaced over half the country’s population, with millions fleeing across Syria’s border to become refugees. – Rappler.com