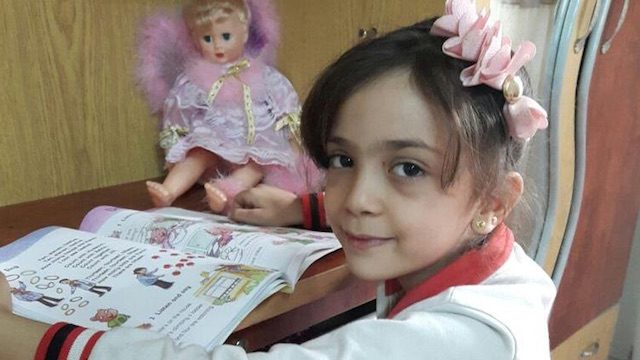 Facebook Twitter Copy URL
Copied
Bana Alabed, 7 years old, has been tweeting about life inside the war zone that is Aleppo, Syria

MANILA, Philippines – A smiling little girl poses for the camera, a doll and a book infront of her.

This could be any other photo posted online, but the caption is a sobering reminder that this not your usual social media post.

“Good afternoon from #Aleppo I’m reading to forget the war.”

It is a picture of Bana Alabed, 7 years old, a resident of Aleppo – the epicenter of the bloody, inhumane civil war in Syria.

Alabed and her mother, Fatemah, have been tweeting from inside rebel-held Aleppo since September 24 using the handle @AlabedBana, and has since amassed a large following, with more than 134,000 followers as of November 28.

My friends. This is not cloud, this is our houses. – Bana #Aleppo pic.twitter.com/qKBNNuoyV4

An appeal to let aid in to their community.

Allow in food. Just allow, just…. Please allow it for the thousands starving here. Why is it a problem?. – Fatemah #Aleppo

And a harrowing image of another little girl – Bana’s friend, the tweet says – in a pool of blood.

Oh dear world, I am crying tonight, this is my friend killed by a bomb tonight. I can't stop crying. – Bana #Aleppo pic.twitter.com/WpmCrEDTIa

The tweets are mostly signed as Bana’s messages, posted on her behalf by Fatemah, a teacher. A number of posts are signed by Fatemah herself.

Syria’s one-time economic hub, Aleppo city and the surrounding countryside have suffered some of the heaviest fighting of the nearly 6-year civil war that has now cost more than 300,000 lives.

The armed opposition seized the east of the city in July 2012 and government forces have been battling to recapture it ever since.

In an interview with the BBC in October, Fatemah said her children have already seen too much of the war. “She saw everything here,” Fatemah told the BBC. “She saw her friend killed, and our house bombed. She saw her school bombed. So that affected her.”

In the said interview, Fatemah narrated their family’s struggles, from lack of food to lack of medicines in the hospital when Noor got sick. Power, internet, and telephone services are also spotty.

But the tricky internet service has not hindered them from getting their message across.

Even Harry Potter author J.K. Rowling has seen the tweets. She saw the children’s tweets about reading her books, prompting her to send ebooks to them.

Some 250,000 civilians in east Aleppo have faced food and fuel shortages and heavy regime bombardment has targeted nearly all hospitals in the area.

Amid all the suffering and death, the Twitter feed still sometimes shine a ray of hope, through Bana and her siblings, Mohamed, 5, and Noor, 3.

Good afternoon my friends. Love from the 3 of us. – Bana #Aleppo pic.twitter.com/LpmfI23OAG

However, the latest set of tweets have taken a darker turn, starting just before northeastern Aleppo was taken by Syrian government forces. Forces loyal to President Bashar al-Assad made a major breakthrough on Monday, November 28, capturing all of the city’s northern neighbourhoods previously under rebel control.

The army got in, this could be our last days sincerely talking. No Internet. Please please please pray for us.- Fatemah #Aleppo

Last message – under heavy bombardments now, can't be alive anymore. When we die, keep talking for 200,000 still inside. BYE.- Fatemah

As of Monday, the family has become one of the latest victims of the relentless bombardments in the area.

Tonight we have no house, it's bombed & I got in rubble. I saw deaths and I almost died. – Bana #Aleppo pic.twitter.com/arGYZaZqjg

Under heavy bombardments now. In between death and life now, please keep praying for us. #Aleppo

The family is now on the run, said Fatemah in her latest post.

Message – we are on the run as many people killed right now in heavy bombardments. We are fighting for our lives. still with you.- Fatemah

– with reports from the Agence France-Presse / Rappler.com