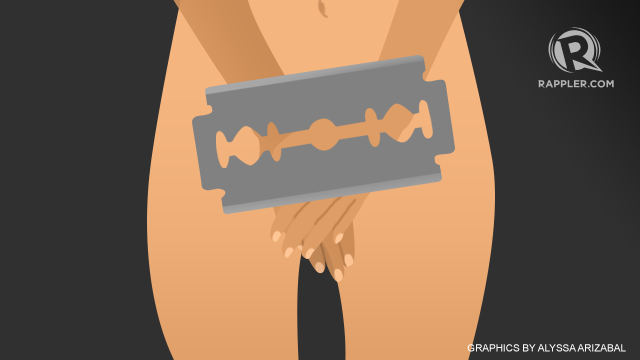 The perception that females must be circumcised like males, as well as religious belief, social pressure, and encouragement from health workers are behind the rampant practice of female genital mutilation (FGM) in Indonesia, a new research reveals.

Conducted by Hivos Southeast Asia, an organization that focuses on global development, and the Center for Gender and Sexuality Study at the University of Indonesia, the research found that among mothers who have had FGM procedure done to their daughters, 97.1% believe circumcision is a must for both male and female. About the same percentage of the respondents also said that they believe the practice has a strong religious justification, and that they did it because it is considered a cultural tradition practiced by most of the people they know.

The study, which was unveiled last week, found that up to 61% of girls underwent female genital mutilation (FGM) before they turned one year old. It also identified a predominant perception that uncircumcised girls will be alienated because they are considered filthy and will grow up promiscuous and unwanted.

The report was based on in-depth interviews, literary reviews, focus group discussions and surveys conducted in Medan, North Sumatera; Sumenep, East Java; Ketapang, West Kalimantan; Bima, West Nusa Tenggara; Polewali Mandar, West Sulawesi; Gorontalo; and Ambon, Maluku. Held in January 2015 to April 2015, the study involves 700 respondents, half of whom are mothers who had the FGM procedure done to their daughters. The remaining half did not opt for the procedure.

The WHO (World Health Organization) determines female genital mutilation (known as “sunat perempuan” in Indonesia) as a very dangerous practice because it can cause severe bleeding, urinating problems, infections and many other complications, while giving no health benefits at all. The practice is considered a violation of human’s rights to girls and women.

Half of the mothers who have their daughters circumcised believe the procedure involves injuring the tip of the clitoris. About 36.6% sees it as cutting a small part of clitoris, 9.1% believes it involves wiping the clitoris with antiseptic, and 1.1% sees FGM as the piercing or scraping of vagina.

The WHO categorizes FGM into 4 types, two of which are commonly practiced in Indonesia.

One of the common practice in Indonesia is clitoridectomy, which is the partial or total removal of the clitoris or the fold skin surrounding the clitoris (the prepuce). In Indonesia, this can be found in Bima, West Nusa Tenggara, where the procedure involves cutting the tip of the clitoris that they called “isi noi.” In other areas in the country, such as Ambon, the same procedure entails a partial removal in the size of “biji padi” (a grain of rice).

The most common form of FGM in Indonesia, which was found in 6 out of 7 areas surveyed, is what the WHO categorizes as type 4. It involves injuring the vagina until it bleeds a little, scraping the clitoris until it shows blood on the surface, or pinching the clit with small knife to extract the white “haram” part – a practice called “cubit kodo”.

Other than these two, female circumcision in Indonesia is merely a “symbolic” practice that does not involve cutting the vagina – practices like wiping the clitoris with cotton and dab the cotton with antiseptic to symbolize blood, a practice that is common in West Kalimantan and East Java. In Gorontalo the procedure involves touching the clitoris with a small knife; in some areas, there is even no touching of the genital involved.

More than half of the FGM procedures is conducted by dukun bayi (baby shaman) and a quarter is done by dukun sunat (circumcision shaman), while 17 percent of midwives and 0.9 percent of doctors conducted the procedure, the study shows.

The danger lies in the fact that the tools used for the procedures are not always hygienic.

Dr. Johanna Debora Imelda, a member of the research team at the Center for Gender and Sexuality Study UI, listed some of the tools used in the procedures, from small knives, razor blades to eyebrow scissors.

“The small knife being used is usually considered sacred, so it is not washed for years, often ending up rusty,” she said during the launch of the report.

In the report a girl from Bima testified about her experience: “I was 6 years old and I felt so afraid that I cried. I didn’t have the courage to look at it. It bled for two days, so I was treated with traditional medicine. Then I was told to bathe in the sea. After the circumcision it felt painful when I peed.”

She recalled her friends’ experiences: “One of my friends was too afraid that she moved a lot during the process. She bled a lot like a woman in childbirth. Another one was so afraid to have it done after hearing of others’ experiences, so her parents persuaded her by buying her gifts so she would agree to the procedure,” the girl explained.

Johanna says the practice of FGM is deeply embedded in Indonesian culture, although female circumcision is not mentioned in the Quran. The study found that society sees the practice as sacred and that it is the parents’ responsibility to have their daughters circumcised.

Support and pressure from family, neighbors, religious figures and health practitioners contribute to a mother’s decision to circumcise their daughters.

Often women’s values lay on whether or not she is circumcised. There will be social sanctions to anyone who goes against the practice. The report describes how different societies practice this.

Riri Khariroh, a commissioner at the National Commission on Violence against Women (Komnas Perempuan), said during the report launch that eliminating the practice of FGM in Indonesia will require redefining the term to shed its association with religion.

“We should change the term ‘sunat perempuan’ (female circumcision) because ‘sunat’ has a strong association and attachment to religiosity and is therefore difficult to eliminate. We should start using the term ‘pelukaan genitalia perempuan’ (female genital mutilation) instead,” she said. – Rappler.com

This article was first published on Magdalene. This website encourages disabled women to reclaim their sexual rights.

Ayunda Nurvitasari earned her Bachelor’s Degree in English Studies, University of Indonesia and currently pursuing the Master’s Degree in Cultural Studies at the same university. She enjoys writing fiction, binge-watching TV series and reading Indonesian literature. Find her on Twitter or Facebook.