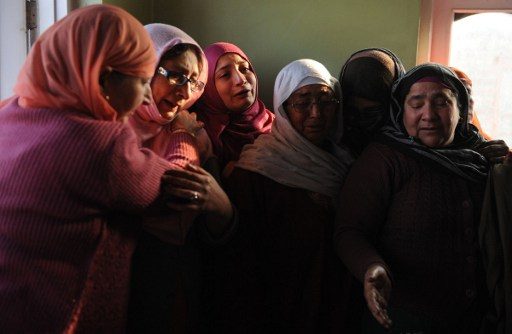 Facebook Twitter Copy URL
Copied
A vast Red Cross survey indicates that acceptance of torture during war has increased dramatically in recent decades, with fewer than half of people now categorically rejecting the practice

GENEVA, Switzerland – A vast Red Cross survey published Monday, December 5, indicated that acceptance of torture during war has increased dramatically in recent decades, with fewer than half of people now categorically rejecting the practice.

The survey of more than 17,000 people carried out in 16 countries showed that most people believe wars should be limited by international rules, banning for instance indiscriminate attacks on populated areas or attacks on hospitals and healthcare workers.

But it also revealed that only 48 percent of respondents said it was wrong to torture enemy combatants to obtain important military information, while a full 36 percent said that doing so is permitted and 16 percent said they did not know.

In a similar survey conducted in 1999, 66 percent of those questioned said it was blatantly wrong to use torture in such cases, while 28 percent said that doing so was acceptable and six percent were unsure.

Peter Maurer, president of the International Committee of the Red Cross (ICRC) told reporters the result was “shocking” and “disconcerting”.

“We need to remember that torture is wrong and achieves nothing, apart from pulling everyone down into the darkest gutters,” he said, insisting that “even in war, everyone deserves to be treated humanely.”

“Using torture only triggers a race to the bottom. It has a devastating impact on the victims, and it brutalises entire societies for generations,” he warned.

The survey – the largest of its kind ever carried out by the ICRC – was conducted between June and September this year in 10 countries experiencing conflict, including Iraq, Nigeria and South Sudan.

Also included in the study were the five members of the UN Security Council – the United States, China, France, Russia and Britain, known as the P5 countries – as well as Switzerland.

The survey indicated that people in P5 countries were far more likely to accept civilian casualties and suffering as an inevitable part of war than those living in conflict-affected countries.

“The more you watch wars only in movies and on screens … the more casual you become with regard to fundamental provisions of international humanitarian law, like torture, attacking civilians,” Maurer said.

For instance, a full 78 percent of people living in countries affected by conflict said it was wrong to attack enemy fighters in populated areas where many civilians risked being killed, compared to just 50 percent of respondents in P5 countries, the survey showed.

“Living far from the realities of warfare, makes it easier to be disconnected,” Maurer said, insisting that “we must not lose our empathy and become numb.”

The divide was not as clear when it came to torture.

At 70 percent, respondents in conflict-battered Nigeria were the most likely to say torture of an enemy fighter was acceptable to obtain important military information, followed by Israel at 50 percent.

The United States, where President-elect Donald Trump suggested during his campaign he might authorise the torture of detainees, including water boarding, to gain information, was not far behind, with a full 46 percent saying such practices were permitted.

Maurer, who visited the United States last week, refused to comment on what impact Trump’s comments might have on attitudes to torture, but said he found no “appetite whatsoever to go back on the issue of torture and to change the policy in this regard.” – Nina Larson / AFP