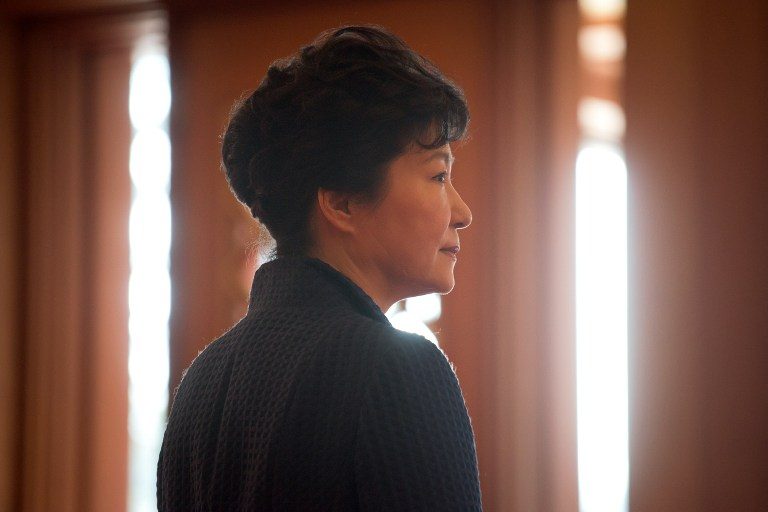 Facebook Twitter Copy URL
Copied
(3rd UPDATE) The National Assembly ballot transfers Park's authority to the prime minister, pending a decision by the Constitutional Court on whether to ratify the decision and permanently remove the president from office

The National Assembly ballot transfers Park’s authority to the prime minister, pending a decision by the Constitutional Court on whether to ratify the decision and permanently remove the president from office.

A ruling could take up to 6 months, during which time Park will remain in the presidential Blue House while the country faces an extended period of political uncertainty and policy paralysis.

The motion was adopted by 234 votes to 56, easily securing the required two-thirds majority in the 300-seat chamber. (READ: South Korea’s impeachment crisis: What happens now?)

“I declare that the bill to impeach President Park Geun-Hye has just been approved,” announced speaker Chung Se-Kyun.

“Whether you support or oppose it, all lawmakers and South Korean people who are watching this grave situation unfold must feel so miserable and heavy at heart,” he added.

“I deeply wish that such tragedy in our constitutional history will not be repeated ever again.”

The anonymous paper ballot was conducted against the background din of hundreds of slogan-chanting protesters outside the assembly building, screaming “Impeach Park.”

The result marked a startling fall from grace for a politician who had run for the Blue House as an incorruptible candidate, declaring herself beholden to nobody and “married to the nation”.

After just under 4 years in power, she now faces the prospect of going down in history as the first democratically-elected South Korean president to be kicked out of office.

The impeachment motion had accused Park of constitutional and criminal violations ranging from a failure to protect people’s lives to bribery and abuse of power.

Supported by all 171 opposition and independent lawmakers, its adoption was made possible by an anti-Park faction within the president’s Saenuri party.

The entire opposition had threatened to resign their seats immediately if the motion was defeated.

The push for impeachment was driven by massive protests that have seen millions take to the streets of Seoul and other cities in recent weeks, demanding Park’s ouster.

The scandal that has engulfed the president and paralyzed her administration has focused on her friendship with long-time confidante Choi Soon-Sil.

Choi has been charged with meddling in state affairs and using her Blue House connections to force dozens of conglomerates to donate around $70 million to two foundations she controlled.

In a first for a sitting South Korean president, Park has been named a “suspect” by prosecutors investigating the case.

High-level corruption has long been a stain on South Korea’s democratic credentials and the presidential Blue House is no stranger to allegations of cronyism.

Since South Korea’s first free and fair election in 1987, every president has faced graft investigations after leaving office and one – Roh Moo-Hyun – committed suicide as a corruption probe closed in on his family.

Their cases often involved family members who were able to leverage links to the president in a society where political influence has traditionally had a very close and unhealthy rapport with business success.

Park, the daughter of military strongman Park Chung-Hee who led the country from 1961 to 1979, was meant to be different.

Both her parents were assassinated and, estranged from her two siblings, unmarried and childless, she promoted herself as invulnerable to nepotism.

“I have no family to look after nor children to inherit my property … I want to devote myself to the nation and the people,” she said in a speech during the 2012 presidential campaign.

The image of duty and self-sacrifice played well with the conservative base of her ruling Saenuri Party, especially older voters who saw her as a virtuous survivor of personal tragedy.

All the more shocking then were the revelations of the extraordinary influence Choi wielded over the president – from selecting her wardrobe to vetting the appointment of top officials. – Rappler.com