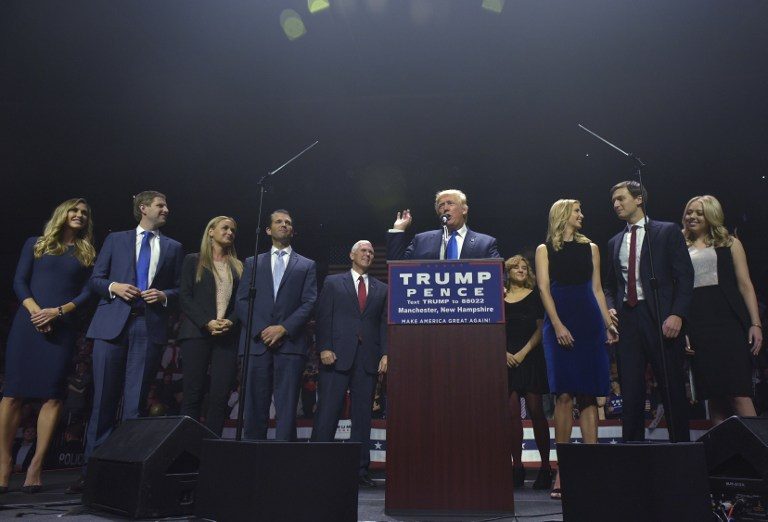 “These are the same people that said Saddam Hussein had weapons of mass destruction,” Trump’s transition team said, launching a broadside against the spy agency.

“The election ended a long time ago in one of the biggest Electoral College victories in history. It’s now time to move on and ‘Make America Great Again.'”

The Washington Post report comes after President Barack Obama ordered a review of all cyberattacks that took place during the 2016 election cycle, amid growing calls from Congress for more information on the extent of Russian interference in the campaign.

The newspaper cited officials briefed on the matter as saying that individuals with connections to Moscow provided anti-secrecy website WikiLeaks with emails hacked from the Democratic National Committee, Democratic nominee Hillary Clinton’s campaign chief and others.

Those emails were steadily leaked out via WikiLeaks in the months before the election, damaging Clinton’s White House run.

The Russians’ aim was to help Donald Trump win and not just undermine the US electoral process, the paper reported.

“It is the assessment of the intelligence community that Russia’s goal here was to favor one candidate over the other, to help Trump get elected,” the newspaper quoted a senior US official briefed on an intelligence presentation last week to key senators as saying. “That’s the consensus view.”

CIA agents told the lawmakers it was “quite clear” that electing Trump was Russia’s goal, according to officials who spoke to the Post, citing growing evidence from multiple sources.

Russian hackers did not limit their hits to the Democrats, according to The New York Times.

“We now have high confidence that they hacked the D.N.C. and the R.N.C., and conspicuously released no documents” from the Republican organization, the Times cited one senior administration official as saying, referring to the Russians.

“It is ….far from clear that Russia’s original intent was to support Mr. Trump, and many intelligence officials — and former officials in Mrs. Clinton’s campaign — believe that the primary motive of the Russians was to simply disrupt the campaign and undercut confidence in the integrity of the vote,” the Times report added.

However, some questions remain unanswered and the CIA’s assessment fell short of a formal US assessment produced by all 17 intelligence agencies, the newspaper said.

For example, intelligence agents don’t have proof that Russian officials directed the identified individuals to supply WikiLeaks with the hacked Democratic emails.

Those individuals were “one step” removed from the Russian government, which is consistent with past practices by Moscow to use “middlemen” in sensitive intelligence operations to preserve plausible deniability, the report said.

“I’ll be the first one to come out and point at Russia if there’s clear evidence, but there is no clear evidence — even now,” said California Republican congressman Devin Nunes, the chair of the House Intelligence Committee and a member of the Trump transition team.

“There’s a lot of innuendo, lots of circumstantial evidence, that’s it.”

At the White House, Deputy Press Secretary Eric Schultz said Obama called for the cyberattacks review earlier this week to ensure “the integrity of our elections.”

“This report will dig into this pattern of malicious cyberactivity timed to our elections, take stock of our defensive capabilities and capture lessons learned to make sure that we brief members of Congress and stakeholders as appropriate,” Schultz said.

Obama wants the report completed before his term ends on January 20.

“We are going to make public as much as we can,” the spokesman added. “This is a major priority for the president.”

The move comes after Democrats in Congress pressed the White House to reveal details, to Congress or to the public, of Russian hacking and disinformation in the election.

On October 7, one month before the election, the Department of Homeland Security and the Director of National Intelligence announced that “the Russian Government directed the recent compromises of emails from US persons and institutions, including from US political organizations.”

“These thefts and disclosures are intended to interfere with the US election process,” they said.

Trump dismissed those findings in an interview published Wednesday by Time magazine for its “Person of the Year” award. Asked if the intelligence was politicized, Trump answered: “I think so.”