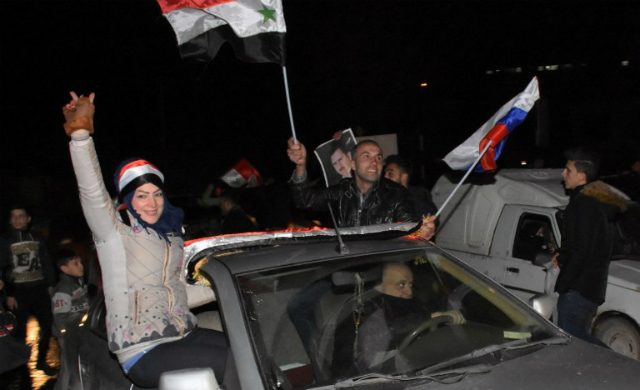 ALEPPO, Syria (UPDATED) – Syrian troops strengthened their hold over Aleppo on Friday, December 23, after retaking full control of the city, as residents anxious to return to their homes moved through its ruined streets.

The army announced on Thursday, December 22, it had recaptured the former rebel stronghold of east Aleppo following a landmark evacuation deal that saw thousands of opposition fighters and residents bussed out.

It was the biggest victory for President Bashar al-Assad’s forces in nearly six years of civil war and a major win for his foreign backers, with key ally Russia hailing the “very important” step.

Braving the cold, war-weary residents crossed districts that had become dangerous front lines, eager to return to neighbourhoods they had not seen in years.

Civilians wrapped in coats trekked through the cold, some rolling their belongings on wheelbarrows.

“I came to check on my house, which I haven’t seen in five years,” resident Khaled al-Masri said. “I really hope my home wasn’t badly damaged.”

The evacuation operation ended more than four years of fierce fighting in Aleppo, which had been divided between government forces in the west and rebels in the east since 2012.

Opposition forces still control an area west of Aleppo and at least 6 civilians were killed Friday in the first rebel rocket fire on the city since it fell under government control, the Syrian Observatory for Human Rights said.

And near the ancient city of Palmyra, the Islamic State group killed 27 Syrian soldiers and allied militiamen in a series of attacks, the Observatory said.

The evacuation agreement was brokered by rebel backer Turkey and regime supporter Russia.

Russian President Vladimir Putin called Assad Friday to congratulate him on the “liberation” of Aleppo, the Kremlin said.

“This success was possible thanks to mutual efforts of all who came together in the fight with international terrorism in Syria,” it said.

Earlier, Putin hailed Aleppo’s recapture, calling it a “very important part of the normalisation in Syria”, saying the next step would be “conclusion of a ceasefire agreement on all of Syria’s territory”.

The Kremlin also announced Putin had signed an order to expand Russia’s naval facility in the Syrian city of Tartus, while Russian military police had been dispatched to recaptured parts of Aleppo.

“We sent in a battalion of military police yesterday evening to maintain order in the liberated territories,” Defence Minister Sergei Shoigu said.

On Friday morning, government fighters moved into Ansari, Al-Mashhad, and other neighbourhoods they had not entered since mid-2012.

They searched for improvised explosive devices and mines, clearing buildings to prepare the way for civilians to return, the Observatory said.

As they finished sweeping through the main streets, soldiers moved into the smaller alleyways to check for bombs, an Agence France-Presse correspondent in one district said.

As the army moved through Al-Mayssar district, Umm Abdo, 42, said she had found her former home but it had been destroyed.

“There’s nothing left… but houses can be rebuilt,” she said.

Syria’s war transformed Aleppo from the country’s industrial hub to a worldwide symbol of bloodshed and devastation.

The army on Thursday announced “the return of security to Aleppo after its release from terrorism and terrorists”.

The regime victory came after state television said the last convoy of four buses carrying rebels and civilians had left east Aleppo and arrived in the government-controlled Ramussa district south of the city.

The evacuation deal, overseen by the International Committee of the Red Cross and the Syrian Red Crescent, put an end to a month-long offensive waged on Aleppo’s east by pro-government forces.

The assault was backed by pro-government militia, including powerful Lebanese Shiite movement Hezbollah.

In a televised speech on Friday, Hezbollah head Hassan Nasrallah said the army’s win in Aleppo put an end to any hopes Assad’s regime would collapse.

“After Aleppo, one can comfortably say that the goal of regime downfall has failed,” Nasrallah said.

The ICRC said the evacuation operation had seen 35,000 people bussed out of Aleppo and another 1,200 evacuated from Fuaa and Kafraya, two Shiite-majority towns in northwest Syria besieged by rebels.

Nearly 6 years in, the conflict has killed more than 310,000 people and displaced half of Syria’s pre-war population.

The army’s win in Aleppo has put the spotlight on the role of powerbrokers Russia, Iran and Turkey, which agreed this week to guarantee new peace talks and backed expanding a ceasefire.